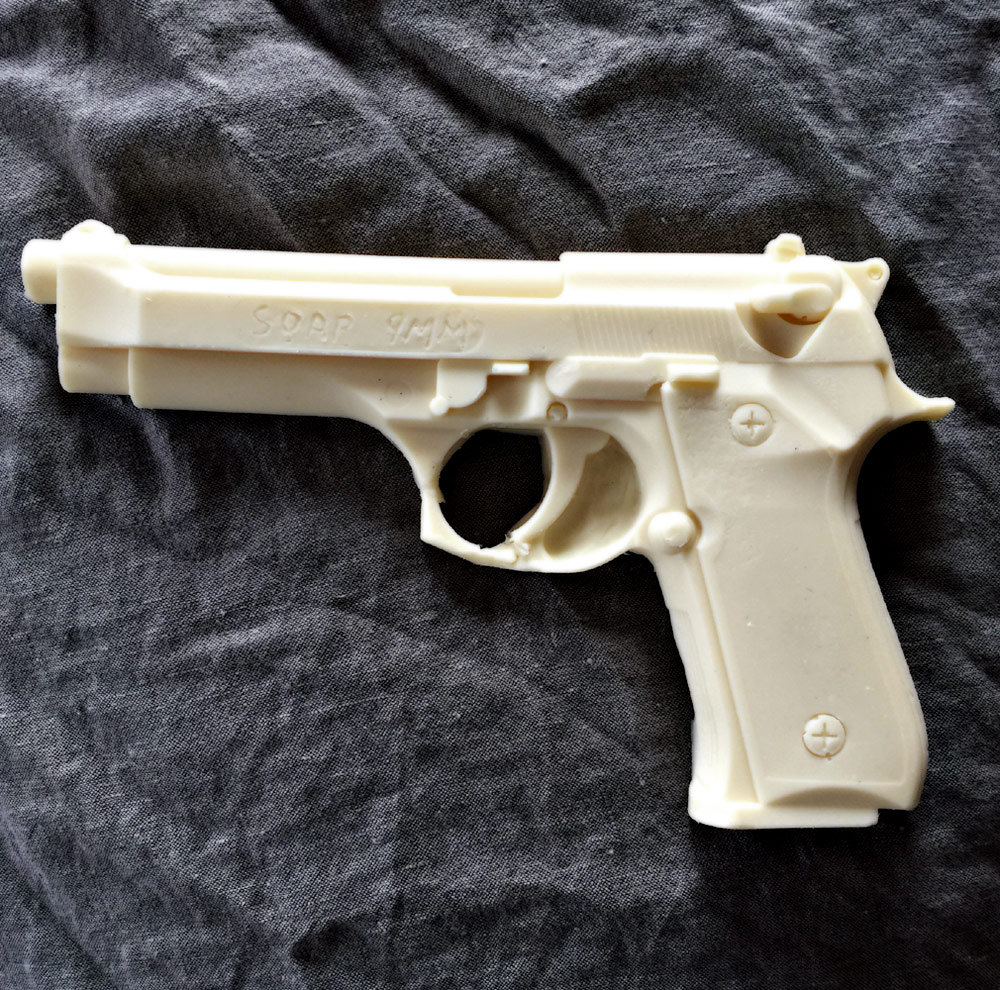 You couldn’t hope to bluff your way out of prison with this, because it’s flat on the other side.

This is a very simple formulation that I use for a lot of quick batches where I want something that’ll set up nice and crisp, give a great luxurious wash, and take detail and demold well. I call it “coconut munky”: 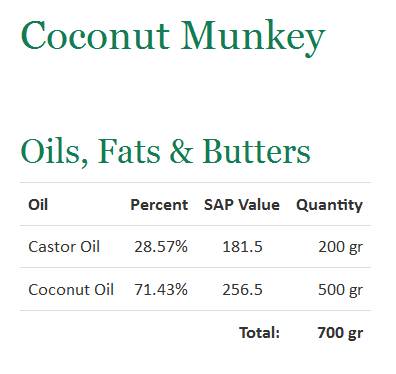 The recipe is simple!

To make this, then, you need a scale, and some cups (I use a big 2 qt pyrex bowl with a pouring spout It’s nice to have pyrex in case you want to just pop your oils in the microwave for a bit of melting) and the oils.

I get my oils from Essential Depot in gallon bottles. If you want to get started, just get 1gal of coconut oil, 1 qt of castor oil, and 2lbs of lye beads.

A stick blender helps but I use a stainless steel whisk for most of what I do.

Then, spatulas, and a few silicone molds or just a silicone baking pan. 700gr, watered up is about a liter, which is just right for a baking pan. Large batches get awkward to handle and you have to worry about oven rack-space and heat management in your lye.

If you want your soap to come out white, add 1/2 tsp of Titanium Dioxide (you’ll need a stick blender to get that mixed evenly through your oils!) Or you can use food colorants. Some soap additives color things (vanilla will turn soap brown, for example!)

If you’re paranoid, have some vinegar and paper towels handy in case you have to neutralize some lye.

Lastly, you’ll want some essential oils. The quantity is a matter of taste. Some things (e.g: frankincense, ylang) go a long way whereas others don’t. Also, you should generally avoid certain oils such as clove and cinammon when you’re a beginner: they cause the soap to thicken abnormally rapidly.

You might need to bathe the coconut oil in hot water to melt it, or leave it on the porch in August in Pennsylvania. Then you measure the stuff into the pyrex bowl.

That’s from the same recipe above, so you can use it if you want. Superfatting is the amount of extra fat you want in your soap that you won’t saponify with the amount of lye you are using. It’s one way to make sure your soap isn’t caustic: if there’s more fat than the lye can react with, you’ll have soap that’s neutral and slightly fatty (and Caine’s rats will eat it). In the example above, that means you can bloop in another 21g of coconut oil or castor oil and your soap will be creamier. 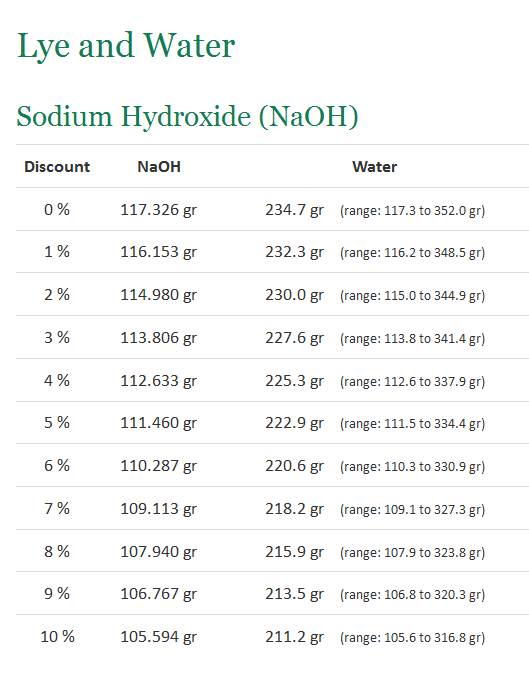 Then, the lye and water. I mix my lye and water in a separate polypropylene beaker (mostly because it’s indestructible and nothing sticks to it. dropping a glass container of lye is .. unpleasant.)

I put one beaker on the scale and add the required amount of lye, then I add the required amount of water and stir it with a stainless steel spoon – I use my regular silverware, it washes clean. The lye will heat up in the water and will make nasty smells. My advice: don’t sniff it. Definitely don’t drink it. Work where it’s ventilated. Make sure your mixing container is heat resistant.

Let the lye cool down until it’s about 130F or so. When you add the lye to the oil it’s mildly exothermic, and if you’ve got hot oil and hot lye and it gets hotter, it may boil and you’ll have what they call “soap volcano!” – This has never happened to me. Yet. You don’t want things too cool or the oil will set up when you add the lye. I usually pop my oils in the microwave till they’re about 100F or maybe a bit more. The rule of thumb I use is to mix everything together when it’s all about the same temperature, which is: about as hot as I like to shower.

The chart shows “discount” – if you’re superfatting you don’t need to discount (discount is basically another way of getting the same effect as superfatting: just use less lye instead of more oil)

So, you prepare your oils, you prepare and cool your lye, and then you dole your scents into a little shotglass or whatever, and have that ready. If you’re using colorant, add it to the oils and blend it in. Then add the lye/water while whisking. You’ll notice the oil immediately starts to change texture. Finish adding the lye and make sure the oil and lye are well blended; it should start to sort of stick to the edge of the bowl, or make little impressions on the surface – that’s called “trace”. When you start seeing the beginning of thickening, add the scent, give it another couple whisks, then pour it into your molds. I then put it on trays in my oven at 100 degrees for 4 or 5 hours then turn it off and leave it in there overnight to start to set.

The next day I open the oven door and let the light in the oven circulate the air to help dry the soap.

A couple days later, demold it! Then let it sit someplace dark where it can air out for a week or two, and it should be fully saponified.