Ted Cruz’ attempt to pee on Donald Trump’s shoes will be forgotten from the annals of propaganda gone awry. What happened on the night of April 20, 1942 ought to be remembered, though we know much less about the event – we have only intangible, edited, documentary and recordings. Those are below:

1942, April 19 – Adolph Hitler’s birthday was the 20th – the nazi brass assembled for a performance of Beethoven’s 9th Symphony, conducted by Wilhelm Furtwängler. Leni Reifenstahl, Hitler’s movie-maker, was there, too, with cameras apparently positioned in multiple locations throughout the theater, from which she edited together a documentary of the 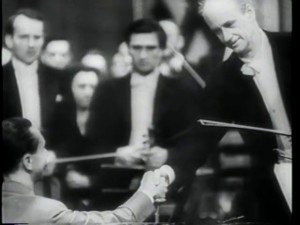 event. It’s typical Reifenstahl – jump cuts, odd angles, documentary-style – shallow depth of field shot with a large lens and a wide open aperture, it looks like something Stanley Kubrick might have done. Film wasn’t very sensitive in those days, and audio recording gear was just transitioning from wire reel-to-reel to magnetic tape.

I first heard of this performance when I was in college and I spent some time trying to track it down. I didn’t hear about the documentary’s existence until decades later when I was looking for a link to the music so I could send it to a friend, and searched on youtube. What’s available there is tantalizing and weird. 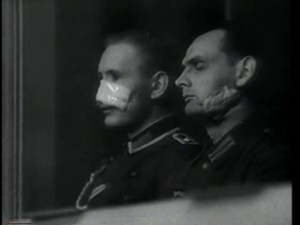 What was going through Reifenstahl’s head when she shot this?

There is not much information about the concert itself and I have never found more than fragments of Reifenstahl’s documentary.

All that really matters is the music. It’s the most insane rendering of the 9th that I’ve ever heard. At times, Furtwängler has the orchestra blasting pell-mell through the music. When I hear it, I can’t help thinking of Randy Rhoades’ guitar work on “Crazy Train” – the round, declarative, solidity of the piece is gone and instead we are shown a shambles in progress, where the conductor appears to be deliberately letting the orchestra teeter on the edge of falling apart. The flutes scream, the kettle-drums sound like artillery, and when the music spirals at 1:30 in the Allegro, it’s like a bird being shot out of the air.

Here’s a bit of a version conducted by Von Karajan in 1993:

Here’s a bit of the Furtwängler version from 1942:

It’s possible that the wire reel recording or the vintage microphone lost a lot of the bass from the recording. That’s just a sample. (There is a link at the bottom of this posting to the full set of the music)

It’s as if Furtwängler took one of Germany’s great cultural accomplishments up and shoved it, like a jagged broken beer bottle, into the face of the nazi elite. In my opinion, this is one of the great “FUCK YOU” of all time. You don’t need to scream “FUCK YOU” in someone’s face when you’ve got the Berlin Philharmonic at your back doing it for you.

Meanwhile, I wonder if Reifenstahl was also feeling the stress on the out of control train – this is an amazing bit of film, too – it’s like a bunch of people sitting, watching something they do not understand, flying just out of reach. Why does she intersperse battle damaged veterans with the “high culture” unless it’s to show the barbarism of what’s going on? What was going through Reifenstahl’s head when she shot this? Reifenstahl famously said “I am not interested in reality” regarding her tendency to edit out imagery that interrupted the grandeur she was trying to capture – perhaps she was so far gone that she saw the maimed victims of war as grandeur, or German high culture.

I read somewhere, and I cannot find it or recall where (perhaps it was in a nightmare?) that Hitler came down to shake Furtwängler’s hand, later, and the maestro nonchalantly turned his back on the dictator leaving him standing with his hand out.

Furtwängler did what he could to protect his family, the orchestra, and tried (but failed) to protect the jews though he helped some escape, including composer Arnold Schoenberg. He was later “de-nazified” and testified:

“I knew Germany was in a terrible crisis; I felt responsible for German music, and it was my task to survive this crisis, as much as I could. The concern that my art was misused for propaganda had to yield to the greater concern that German music be preserved, that music be given to the German people by its own musicians. These people, the compatriots of Bach and Beethoven, of Mozart and Schubert, still had to go on living under the control of a regime obsessed with total war. No one who did not live here himself in those days can possibly judge what it was like.

“Does Thomas Mann [who was critical of Furtwängler’s actions] really believe that in ‘the Germany of Himmler’ one should not be permitted to play Beethoven? Could he not realize, that people never needed more, never yearned more to hear Beethoven and his message of freedom and human love, than precisely these Germans, who had to live under Himmler’s terror? I do not regret having stayed with them.”

The reviews on Amazon are interesting. I believe the recording is out of copyright, so you can buy it, get it on youtube, or download it from here:

PS – there are some commenters on the Amazon reviews that really profoundly do not get it and I want to reach through the internet and slap them. One of them complains that “there is too much background noise and coughing.”  FFS. It’s a great thing that this recording is as good as it is, and survived.

First We Got The Bomb, And That Was Good… » « Hardcore Gaming