“It is inconceivable how the ancients, who cultivated the land as well as we do, could imagine that all the

seeds they sowed on the ground had to die and rot before sprouting and producing. It would only have needed someone to pull a seed from the ground at the end of two or three days; it would have appeared fine, a bit swollen, the root below and the earth above.” 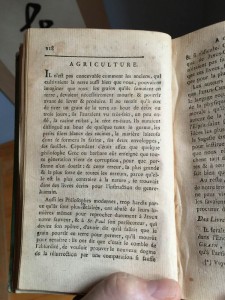 “They would have distinguished, at the end of the seed, the little white threads of the roots, the opaque material which composes flour, the two envelopes, the leaves.

Until now that has been enough for some philosophers.

Greeks and barbarians alike would have been extinguished if all life arose from corruption, because nobody doubted it & this error – the largest and most mad of all errors because it is the most contrary to nature, can be found in books written for the education of humanity.”

Here Voltaire is playfully backhanding the theory of spontaneous generation – the idea that certain forms of life arise from death or corruption.