I am in no way responsible, however I am highly amused: 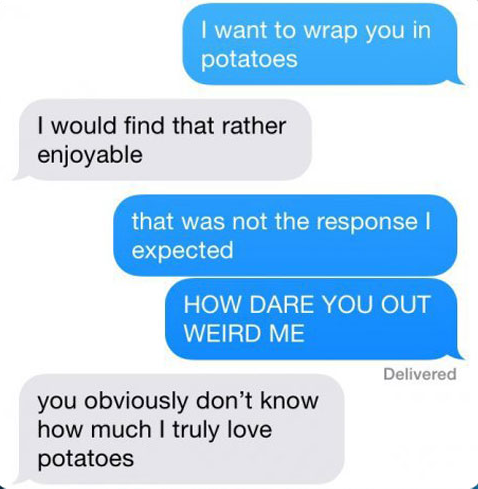 A text conversation about the most important issues of the day.

Sorry if this is causing a problem for you, but there may be a problem with comments failing to appear after being submitted. Not sure what the problem is or how long it will last. More updates as events warrant.

UPDATE: Problem deciphered, appropriate measures in place. No one should have any further concerns.

A city councilor running in 3rd place in the New Mexico first congressional district has created a commercial that actually sounds like someone upset about the extravagant gun violence in the United States. The first words Pat Davis speaks in his new ad?

He goes on to criticize the anti-regulation/anti-legislation position of the NRA on gun ownership, possession and use as being one cause of “dead children”.

Pro-lifers have always been odd to me. On the one hand, I find it difficult to believe that they see medical abortion as anything remotely comparable to murder or even euthanasia. After all, think about what that would really mean. Wouldn’t the people who believe that shun birthdays as points for celebration in favor of conception days? Wouldn’t they have funerals after miscarriages? Why do they put off naming a child until it’s born? And yet we don’t see that – or at least we don’t see that from even 10% of the people who claim they’re pro-life.

On the other hand, if they aren’t parroting something that only vaguely represents a tribal position rather than a genuine and specific personal belief, then the consistent thing to do really is to chain oneself to the doors of clinics, to hold die-ins at the Capitol Building, and generally use every non-violent means possible to preserve life. Do they do that? No. The extremists of the “pro-life” movement bomb clinics, throw acid, and commit murder. While I can understand the rationale behind killing one to save two (or more), it’s not a rationale that holds all life to be sacred, as they claim to do.

But as hard as it is to come to grips with the behavior of the self-named “pro-life movement”, the gun control movement is equally weird. I do believe the laxity of US gun laws results in deaths that would not otherwise have occurred. So why am I not doing everything I can to stop gun sales? Part of it is explained by relevant differences between the situation: if you believe abortion is murder, then you know where and when murders are going to be carried out. That’s not the same as gun control advocates who believe that lax gun laws are legislative negligence destined to result in deaths at various unknown times in various unknown places. But it’s still a little weird that there seems to be so little urgency in the rhetoric of proponents of stricter monitoring of guns sold and stricter regulation of what guns can be sold and to whom.

That’s why I welcome this ad. Yes, it may have taken a 3rd place primary candidate to make the ad, but the ad is positively drenched in an honest embrace of what it means to say that legislative gun control negligence is causing death.

Watch it for yourself, and remember to vote, wherever you live.