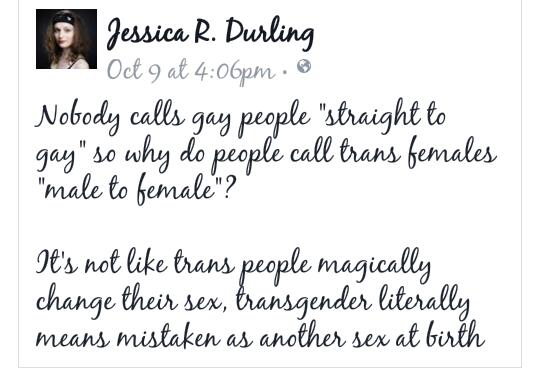 This is a splendid example of why trans feminists often struggle to be succinct. There are layers to this question and follow-up statement. I’m not really interested in razzing on trans women who aren’t academic or more generally feminists, simply because we as a demographic are a lot less able to access academia. But I am going to make an honest attempt to address the question and statement, because there’s a lot that makes my eyebrow twitch here.

…Except that they do. Any time a bi+ individual engages in a hetero-passing relationship after having been in a same gender relationship, it is often assumed–even by other stripes in the rainbow–that the person has “gone straight,” the assumption being they were “gay.” People really do suck at wrapping their head around polysexual identities. It is worth noting that fixed notions of sexual orientation have certainly contributed to the discourse around gay rights by framing it as an immutable human characteristic, but in so doing the same discourse refuses to acknowledge the fluidity of other identities. Someone like me specifically identifies as Queer in part because of its political association with fluidity.

This is also to say nothing of the fact that the reason closets exist is because people assume you’re straight until you tell them otherwise. In a sense, coming out is going from straight to gay, at least in the perception of others. So, you know, this is a thing.

2) So why do people call trans females “male to female”?

This is certainly a contentious issue within the trans community. There are some trans women who go deep stealth, cutting all ties with any trans or queer associations, moving away and starting new jobs after having secured cis passing status and spending the remainder of their life never again disclosing their history. The reasons for doing so are multifaceted. At least some of the time, the women who choose this route simply want to be understood in no uncertain terms that they are female. Frankly I sympathize. I’m quite tired of justifying my existence, too.

Simply put, the main reason we accept this construct is because people are desperate to cling to the sex binary. It’s worth noting that I am among the camp of trans feminists who object to the terminology for this reason. No matter how we define biological sex, there will be exclusions of people who we understand to be men and women, whose manhoods and womanhoods we never deigned to question until we started drawing arbitrary lines.

Do you define it by reproductive capacities? Then all the folks with one fertility condition or another aren’t men or  women.

Do you define it by gender performance? Then anyone who isn’t femme isn’t a woman either.

Do you define it by chromosomes? I guess you need to draft a letter to all the AFAB ladies with Androgen Insensitivity Syndrome, or for all the people with chromosomal intersex conditions.

Do you define it by genitalia? I guess all the intersex infants can’t grow up to be men or women.

Do you define it by secondary sex characteristics? Well golly, there’s a lot of men with boobs or women with facial hair who you need to have a conversation with.

The very idea of clean cut binary boxes is ludicrous when it comes to human sex determination. The list above barely scratches the surface in terms of its range. That is why I reject the construct of MtF: The very designations of male and female are dubious to begin with. I was assigned male, and until I disclose my status as trans, people assume I was assigned female. The basic scientific fact is that all the same secondary sex genes present in my DNA are regulated by my hormone replacements, and the body that people assign “female” to nowadays is as every bit as real as any other cis woman’s, and as far as day to day interactions go, that should be good enough.

Note that the issue is perception, not measurement. Very few people actually know their karyotype or the alleles of their 40+ genes involved in secondary sex characteristics. Whatever else the objectors might say, these things are not measured when a man has deigned me worthy of street harassment–he sees a woman, and therefore an object. I don’t think he’s particularly concerned about my karyotype when he’s shouting at me from the back of a pick up truck to show him my tits.

3) It’s not like trans people magically change their sex

Tadaa! Your “sex” changes. People clearly used to code my body as male and masculine. Now they clearly code my body as female and feminine. Obviously this could not be the case if what people thought my sex was didn’t change. And remember, all the changes I’ve undergone were capacities I already had, even before I figured out I was trans. But my genes have never undergone a radical alteration themselves–the “immutable property” comes with knobs and levers that can be manipulated, so that’s what I did. At no point did anyone, including myself, have any confirmation of my karyotype or what particular combination of alleles my many sex genes had. It seems silly, then, to call this the point of your focus, when so few of us actually know what ours are. Instead it is much more likely that our bodies play into our perception of our own sex, bodies which can and do change.

Of course cis people have this happen to them too: It’s called puberty and andro/menopause. That’s why we ought to be suspicious of essentialist claims that treat sex as an immutable, unchangeable property: It’s not just one property, and many of those properties come equipped with the capacity for change. It’s something of a moving target throughout all of our lives, regardless of our gender identity.

4) Transgender literally means mistaken for another sex at birth

While this is semantically true, I merely argue that the mistake is twofold: Treating genitalia as indisputable foolproof indicators of sex; and treating sex as being one particular thing when it is in fact a mosaic of properties, all of which can vary to a wide degree even if you limit your scope to cis folk. Since simplistic notions of sex are questionable to begin with, one could argue that a great many number of people have had mistaken assumptions made about their bodies based off our birth assigned sexes. We wouldn’t necessarily call them all trans.

We would, however, in an ideal world, perhaps question the value of assigning sex and therefore gender to begin with.