Psychology Today attempted to step into the complex world of sex & gender diversity and it’s a flaming hot mess. It’s a pretty lengthy read (although it at least has citations), and it will take me quite a few writing sessions to get through it all.

So I’ll probably do another series, the same way I’m doing with CBS right now. Because it’s a lengthy read, I wanted to introduce folks to the article and get them reading along with me in bite size chunks.

The author, Dr. David P Schmitt, makes his foray into GSD with an okay start.

It has become more and more common for young people around the world to describe themselves not as a “man” or a “woman,” but as “something else.” One term for this something else is transgender. Transgender is an umbrella term for a wide variety of different identities (e.g., genderqueer, gender variant, gender fluid, gender non-conforming, hyper-feminine gay man, asexual, etc.). The common core of transgender identities is they don’t fit within traditional cisgender binaries of men versus women (“cisgender” refers to people whose sexual and gendered identities align in typical ways).

At face value, there’s nothing overly contentious concerning Dr. Schmitt’s representation of GSD theory. Of course, the first citation for transgender leads to an article with a number of follow-up readings. One of those readings performs the faux pas of using “transgenderism,” rather than something less gross like “gender variance,” to describe the concept of  non-normative genders.

This is a particularly uncomfortable phrasing of the concept, because it frames gender variance as an ideology, an -ism, when it simply broadly represents personal narratives that are mostly contrary to normative gender. In other words, I feel it can contribute to this notion that a personal decision to transition somehow has political implications for other people in the way that identifying as a feminist or capitalist does. This belief of gender variance as an ideology mischaracterizes gender variance as something besides a purely personal experience. It would be like arguing that contraction of cancer is a political statement and calling cancer survivors cancerists.

The second citation is the American Psychiatric Association, which has a less bad page, I guess.

Transgendered individuals frequently face intense prejudices and physical dangers in trying to live their authentic lives around the world (looking at you, North Carolina). Here is a brief, emotionally-compelling video describing some transgender people’s problematic experiences with health care in the USA. It’s a powerful video, I encourage you to watch it and think about how cisgenders would feel if they were treated like transgender people in your society. Think about it.

Anyways, the discrimination stats are solid. Not much to say except, no, really, check them out. Being gender variant makes a person vulnerable as fuck.

Another increasingly common variation of sexual identity expression is transsexuality. Recently, Caitlyn Jenner, the Wachowski sisters, and many other famous people have publically announced they have changed their sexual identity from male to female (or vice versa).

According to a widespread conception of what it means to be transsexual, most transsexual women were always “women” in terms of their inner psychology (i.e., they felt their sexual identity was “woman” and they often had female-typical/feminine-gendered desires, interests, and attitudes). Transsexual women were never really men on the inside, according to this narrative, they were women who had the misfortune of being born in the wrong sexual body. Not everyone agrees with this view, including many transsexuals themselves (see here), but it is a very common narrative.

Holy jesus fucking murphy. That “see here” citation is a fuck-mothering 250 page document. Quite the citation to insert so flippantly, considering you could find disagreements within the trans community by opening up a trans page on tumblr for fuck sake. The citation opens with:

Although I am virtually certain that my conclusions are correct, they fly in the face of mainstream academic opinion. If a current textbook discussed the basis of my intuitions—which many people share— it would do so in the context of stereotypes. It would neglect to explain that my intuitions are probably correct, and it wouldn’t discuss why. My book aims to do better. 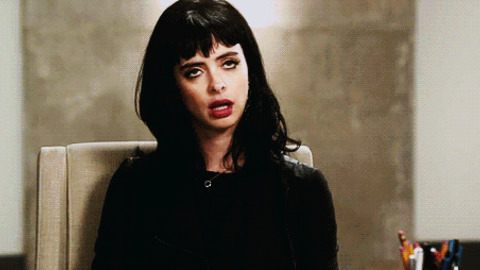 This isn’t the first time Jessica Jones captures my facial expression; nor will it be the last

J Fucking Michael Fucking Bailey. That champion of ethical research, who used private disclosures from trans women in research without their consent? Shitstain human being Alice Dreger of the pseudo-scientific clusterfuck that was Galileo’s Middle Finger came to his defence, claiming that the criticisms made of Bailey pathologizing Queer trans women for not being heterosexual were “harassment.” Academics responded, harshly and not unfairly, that wading into discourse without some fucking data is bad science.

Scientists. Wanting science. From a scientist.

As for Dreger, what do trans feminists have to say about her work?:

However, her presentation and interpretation of the theory is accompanied by many questionable claims and inaccurate implications, ultimately offering an incomplete and sensationalized account of trans women’s experiences of their genders. At times her perspective reveals a surprising unawareness of crucial aspects of these women’s realities that directly come to bear on the theory and its validity. She further omits many of the more doubtful claims made by sexologists in support of the theory, disguising the full extent of what she’s really endorsing. Her engagement with the controversy surrounding Bailey’s book occasionally descends into the kind of overly personal attacks that she otherwise deplores.

That’s quite a steaming horse turd Dr. Schmitt has subtly slipped into his discourse. It would take me a couple days and a couple buckets of vomit to get through Bailey’s and his useful idiot’s esteemed work, and I’m sure it would take me many more to discuss what’s inside of it. Spoiler alert: I’m not pre-disposed to trust the judgement of arrogant cis men who blithely claim they’ve got transdar, and that’s without knowing his narcissistic disregard for boundaries and consent. In the interest of thoroughness I will likely revisit Bailey to pay him his due, just not today.

Schmitt, you’re off to a rocky start. And Psychology Today–you really should make sure that no citation mentioning Bailey is done without disclaimers about how Bailey is a weaselly, pungent dingleberry with no regard for the autonomy of other people, a bad scientist with the sort of ethical backbone that makes Michael “Backstabber” Gove look downright honourable. Mentioning that clusterfuck in passing raises my eyebrows. A throwaway line about how “folks have disagreed”? Surely there are better citations than J Fucking Michael Fucking Bailey to make that point.

We’ll see how bad it gets next time.