As it says on the sidebar, one of my most important activist projects has been analysis of ace community demographics. More specifically, I volunteer expertise for the AVEN Community Census. As far as activism goes, it isn’t as glamorous as blogging, but IMHO the glamour of survey analysis is way underrated.

Anyway, let’s talk about the results on gender from 2014: 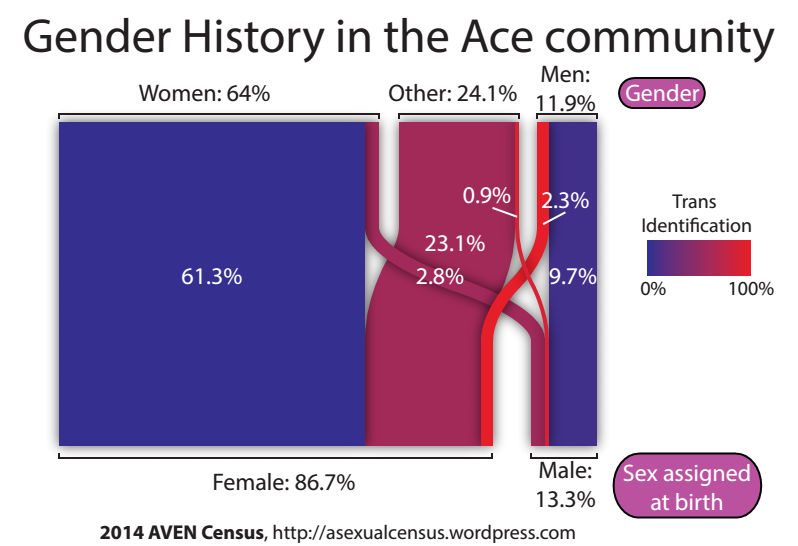 This figure was originally published here, but I made a slight revision. The width of each line is proportional to the percentage of the ace community. The color of each line indicates how many people in that subgroup identify as trans or unsure. “Other” refers to people who indicated that they were neither men nor women, but throughout this post I will refer to this group as non-binary.*

Within this figure is a cross-section trans politics. The biggest surprise to me was how few non-binary people identify as trans. But I should first offer brief comments about other features of the data.

Readers are invited to speculate about any of these observations, although please note that open transphobia is against my comment policy, and will be deleted in favor of more productive discussion.

Now, back to the single observation that most surprised me: most non-binary people in our survey do not identify as trans.

There are, of course, multiple definitions of “trans”, but the one I most accept is “someone whose gender does not match the sex assigned at birth”. I would go so far as to say that I advocate this definition, in opposition to the others. But advocating a particular definition becomes rather thorny when I am a cisgender person, and when many non-binary people apparently disagree with me. Surely I should never tell non-binary people that their preferred identity terms are wrong.

So all of this depends on how non-binary people see it. And so I’ve (politely) asked nonbinary people for their thoughts on a few occasions.

Some of the first answers I got were that “trans” connotes transition, a moving from one side to another. Non-binary people don’t necessarily see themselves that way, so they prefer not to identify as trans.

Later, I asked the same question on Tumblr, and it was funny how different the answers were. Most people said that the problem was identity policing. They regularly saw messages from binary trans people that non-binary people weren’t welcome. They were told that non-binary people were mostly just kids following the newest trend. Tumblr has a reputation for being an SJW haven but in reality it can be so vicious.

The ironic part is that among people who don’t match their assigned genders, the largest groups (AMAB women and AFAB nonbinary people) are precisely the same groups that are least likely to identify as trans. I don’t know what that says exactly, but I’m tentatively facepalming.

*BTW I’m aware that most trans people consider their gender to have been the gender they always were.  Thus sex assigned at birth is not really part of their “gender history”, but rather, part of a history of being assigned the wrong gender.  I’m not really sure how else to title the graph though.