The planning fallacy is a phenomenon in which predictions about how much time will be needed to complete a future task display an optimism bias and underestimate the time needed. People commonly fall prey to this fallacy, so it would be advisable to start working on projects early. Then again, my own experience is that I tend to work more efficiently and focus on a task much better when I know that I have little time left and I cannot drag on some job. Thus for me starting some project way too early is counterproductive. The solution is then to plan my schedule so that I have enough time to comfortably finish some job but without having too much spare time, because the latter would unconsciously prevent me from working efficiently.

Maybe some of my readers noticed that I haven’t been publishing much lately. I dislike cold, so in winters I mostly stay indoors. But in the warmer months, however, I actually have things to do. This September, I was busy planting new trees and shrubs in my garden.* And even when I was at my computer, instead of writing yet another blog post about bigotry, I spent my time researching the winter-hardiness of various plants from my “to consider” list. Oh yeah, and I was also busy mushroom hunting in forests too.

Before you can plant something, you may need to prepare the land (unless it is already prepared). In this case, I decided to plant some plants with edible fruit in a space where there used to be grass, wild flowers, and tiny plum trees.

Digging out tiny plum trees ought to be quick and easy, right? Maybe no. 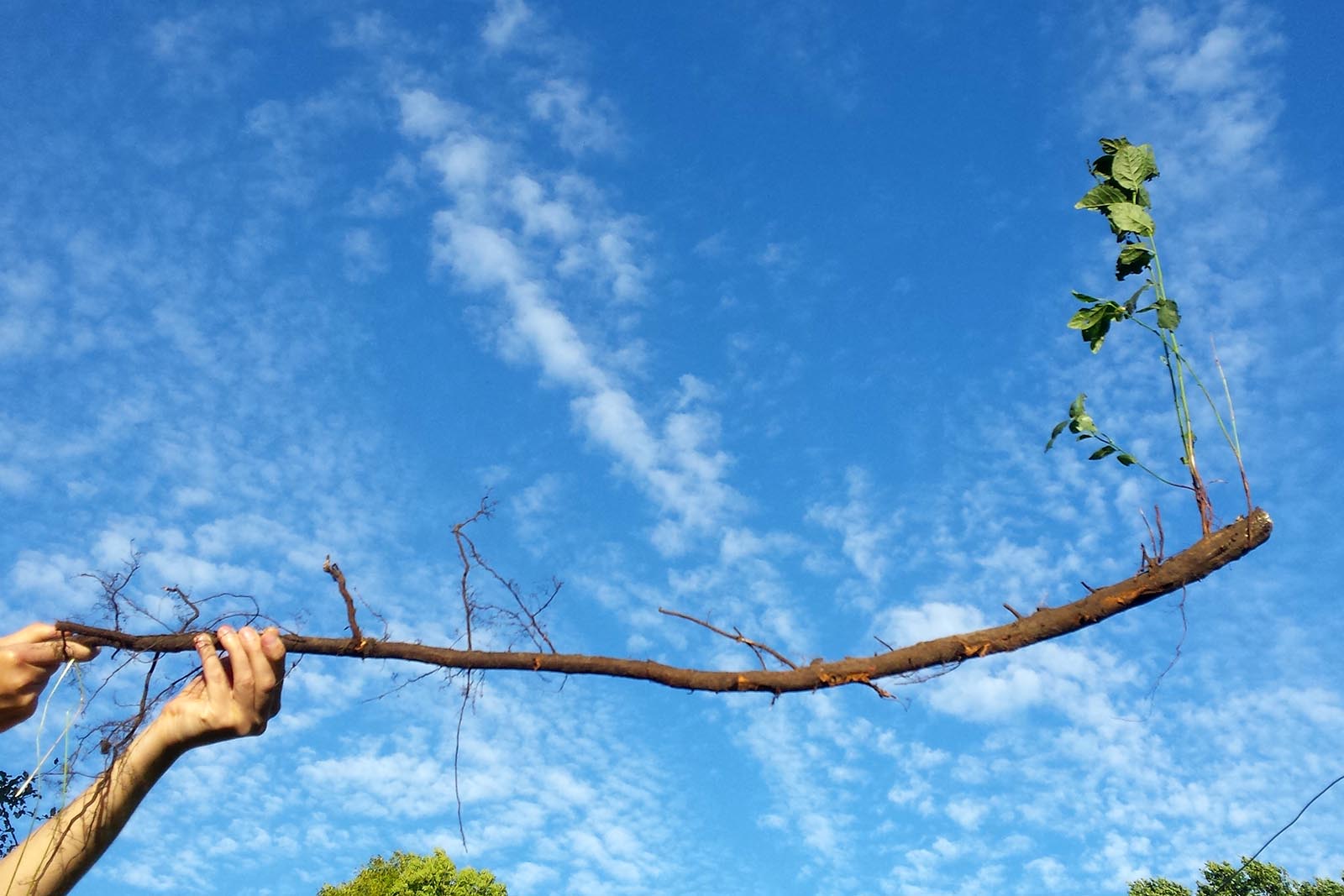 I mistakenly imagined that my unwanted plum trees were one or maybe two years old seedlings. Instead it turned out that they had grown from old roots in a place where large plum trees had been growing for many years. Talk about planning! Needless to say that digging out dozens of these “baby trees” took more time than expected.

In case somebody is wondering why I even want to get rid of plum trees, these have been growing and propagating on their own for several tree generations. The result are few tiny plums with poor taste.

Of course, since there is an abundance of unwanted semi-wild plum trees in every old garden, I have tried grafting plum cultivars on them only to get mixed and inconsistent results that led me to conclude that it is not worth it and I’m better off sticking with commercially available rootstock.

In Latvia, even though plums are grown commercially and also by pretty much every hobbyist gardener, there actually are serious problems with plum winter-hardiness. As always, plum cultivars with better fruit quality have worse winter-hardiness. On top of that, once every few decades we get a particularly cold winter during which entire plum orchards freeze to death. It’s a risk gardeners choose to take. If your plum tree survives for at least a decade before finally freezing to death, you get plenty of fruit. If you get unlucky and your tree dies quickly after planting, you plant a new tree and hope that next time you will have better luck. Of course, the probability that your trees will die can be significantly reduced by picking more winter-hardy cultivars. Unfortunately, there’s a trade-off as those tend to have smaller and worse quality fruit.

In Latvia, the most commonly used plum rootstock are Prunus cerasifera var. divaricata seedlings from specially selected plants that show various desirable characteristics. Those are a popular choice, because they are easy to propagate, grow vigorously, are drought tolerant due to their deeper root system, and the roots are cold tolerant. Unfortunately, they actually decrease the winter-hardiness of the plum tree grafted on them, because in autumn they stop growing and start preparing for winter later than other plums. As for alternative plum rootstock, yes, of course there are other options, but everything has its drawbacks.

Growing fruit trees and shrubs in a cold climate is interesting. Especially considering how gardeners always want to have some nice plant with good fruit quality despite the pesky fact that said plant is better suited for warmer climates.

Instead of my wild plum trees that had to be dug out, I planted Actinidia arguta (among other plants, of course). 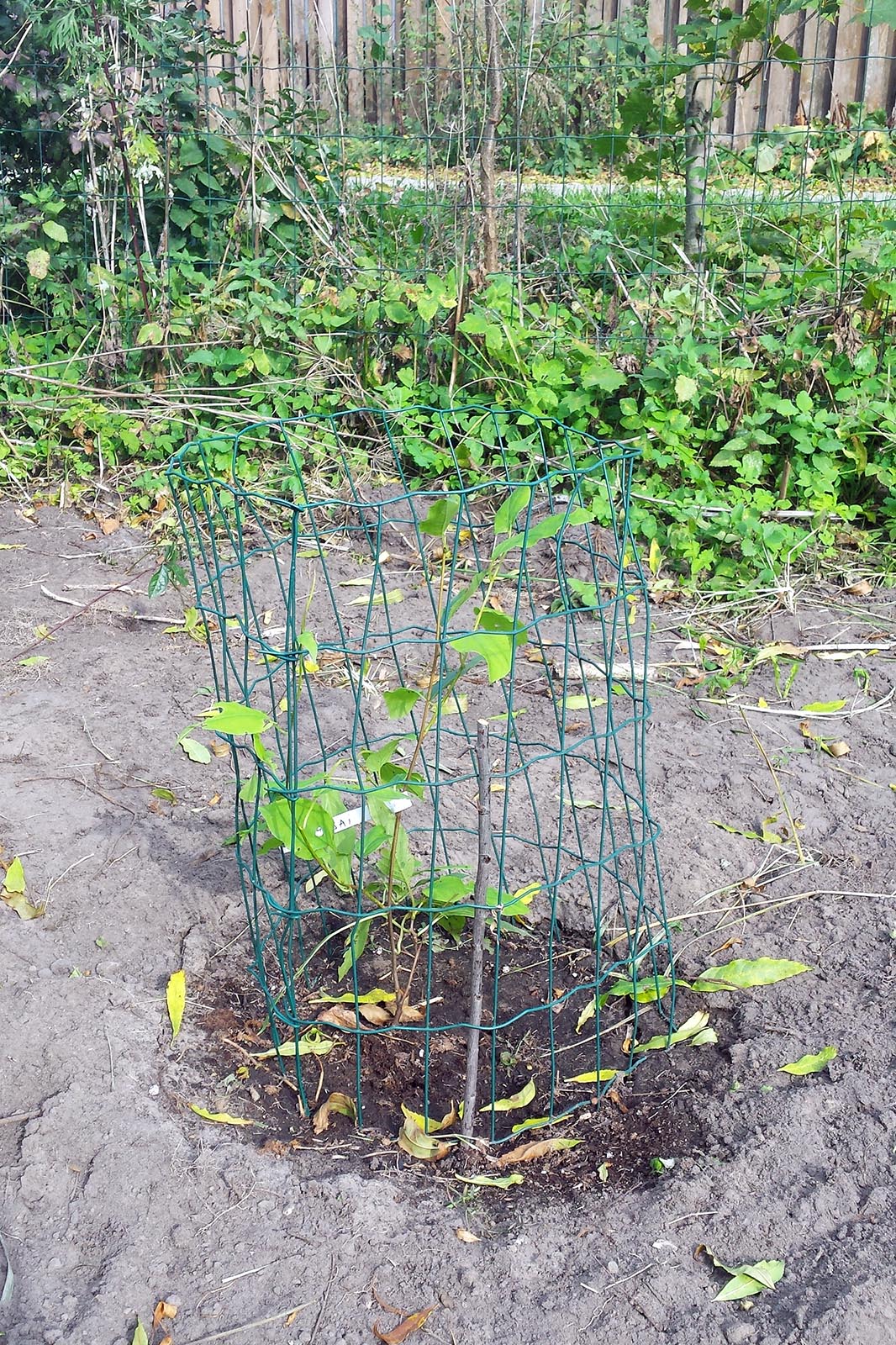 Actinidia arguta “Issai.” The fence is supposed to protect the plant from cats and dogs. Cats like to eat these plants and dogs like to run and stomp everywhere. Actinidia are climbing vines, and installing support for them will be a problem for a later date.

Actinidia is a genus of plants that include kiwifruit (Actinidia deliciosa). Of course, those aren’t sufficiently cold tolerant for this climate. Actinidia kolomikta are plants that I have been growing for years, they are very winter-hardy and have small and tasty berries. Actinidia arguta have larger fruit and worse winter-hardiness. Since Actinidia arguta are capable of surviving here (if I get lucky and there is no particularly bad winter), I’ll take the gamble. If the plant dies, I only lose a few euros.

Next spring I’m also planning to plant walnuts and pawpaw (Asimina triloba). They might freeze to death, but it is possible that I’ll get lucky and these trees will survive long enough for me to get fruit and nuts.

Then there’s also my ongoing project, namely getting an apricot tree. Well, theoretically, I could just go to one of many Latvian plant nurseries and buy an apricot tree there. The pesky problem is that they all sell apricots grafted on Prunus cerasifera var. divaricata rootstock despite some serious incompatibility problems. The other pesky fact is that apricots have poor winter-hardiness.

When a tree freezes in winter, the first part that dies is the trunk, branches are more likely to survive the same temperatures. Therefore you can graft a less winter-hardy cultivar with better fruit quality on the branches of a different plant that will provide a winter-hardy trunk. In other words, I am currently growing a plum tree (cultivar called “Latvijas dzeltenā olplūme”), which I am planning to turn into apricots via grafting as soon as my plum tree grows larger. Scientists have done plenty of compatibility tests between apricots and various plum cultivars, and this one was among the best choices. At least in theory my plan should work.

Of course, in addition to my experiments with less than perfectly winter-hardy rare and exotic plants, I also have fruit, berry, and nut producing plants that are either more popular or reliably survive winters here. In case we get an unusually cold winter soon, I won’t be too disappointed, because not all of my plants should die. And no, I’m not counting on the climate change to reliably allow me to grow plants from warmer climates. Winter-hardiness is complicated. The same plant that can endure -30 °C in December/January can easily die in -10 °C in February if the cold period follows a warmer first half of the winter. Or if there’s no snow and cold temperatures. On top of that, plant winter-hardiness also depends on the growing conditions (temperatures, amount of rainfall) during summer and autumn. How well a plant can prepare for winter determines its ability to endure cold afterwards.

* “My garden” refers to my boyfriend’s real estate adjacent to his home, which I have appropriated for my food production needs. As for me, I live in a city, in an apartment.