That great big clueless jackass, Donald Trump, tended to blurt whatever was in the forefront of his mind. Picture, if you will, a conveyor belt of bad ideas attached to a microphone, and that’s a good model for how well Trump could think and keep a secret.

We should bear that in mind because it’s starting to appear as though all the crazy stuff Trump babbled was actually a view into what was happening. In this case, I am referring specifically to something most of us ignored as “more dumb bullshit steam-clouds out of ole stupid” – the “let’s take their oil” comments. Remember: [abc]

After President Donald Trump said on Monday the U.S. will be “keeping the oil” in northeastern Syria, his administration is looking into the “specifics,” according to a senior State Department official — but it’s prompted renewed cries that doing so is a war crime.

It’s not really a “war” crime – it’s a crime under international humanitarian law. It’s the kind of thing the UN would be condemning a country for doing as long as that country didn’t have a veto in the security council, i.e.: if it was a poor country they’d be stopped immediately. But when the US does it? [newsweek]

In remarks delivered Tuesday and sent to Newsweek by the Syrian permanent mission to the United Nations, representative Bashar al-Jaafari told the U.N. Security Council that “the U.S. occupation forces, in full view of the United Nations and the international community, took a new step to plunder Syria’s natural resources, including Syrian oil and gas” through the recent establishment of a company called “Crescent Delta Energy.”

This firm, “with the sponsorship and support of the US Administration, has entered into a contract with the so-called ‘Syrian Democratic Forces/SDF’ militia, an agent of the US occupation forces in northeastern Syria, with the aim of stealing Syrian oil and depriving the Syrian state and Syrian people of the basic revenues necessary to improve the humanitarian situation, provide for livelihood needs and reconstruction,” he added.

The Syrian diplomat noted that Trump had made his intentions known earlier, such as in a late October press conference at which the president said he sought “to make a deal with an ExxonMobil or one of our great companies” to take hold of oil in Syria. Trump has publicly professed “I love oil!” and that he was staying militarily involved Syria “only for the oil,” even as his officials insisted the Pentagon’s main focus was battling the Islamic State militant group (ISIS).

So, this is what happened: the Trump administration found someone who was willing to make a ton of short-term money by creating a business, then they found a patsy in the CIA-sponsored anti-Syrian government rebels, and that patsy signed a very official contract authorizing the American company to pump oil and ship it really quickly out of Syria at a tremendous discount – basically: nothing. Specifically designed to make sure the Syrian government and people (not that Syrian oil wealth trickles down to its people, anyway) don’t get to “wet their beaks” while the US and its enablers do. [Guard]

One of the recurring themes of Donald Trump’s national security strategy is his plan to “take the oil” in Iraq and from areas controlled by Islamic State (Isis) extremists. It would drain Isis’s coffers and reimburse the US for the costs of its military commitments in the Middle East, the candidate insists.

“We had to charge the village $1mn for the bombs we dropped on it, to save it from communism.”

All of this is done under the rubric of the “Authorization for Use of Military Force” – the blank check congress handed Bush to fuck up terrorists wherever and however we find, or create them. ISIS is, in case you have forgotten, an American creation spawned out of the prison torture rooms and chaos of Iraq. They’re not very pleasant people but then look who they’re fighting.

He added: “One of the benefits we would have had if we took the oil is Isis would not have been able to take oil and use that oil to fuel themselves.”

That is the psychology of many rapists.

“A US convoy, consisting of 30 tanker trucks laden with stolen Syrian oil has left the war-stricken country and sneaked into neighbouring Iraq through the illegal Al-Walid crossing in the Al-Yaroubia area,” SANA said.

The official agency added that the US forces, in collusion with the Kurdish Syrian Democratic Forces (SDF), control most of the oil fields in northern and eastern Syria.

This was said to have been confirmed during a Senate hearing exchange between South Carolina Republican Senator, Lindsey Graham, and US Secretary of State, Mike Pompeo, in late July.

Syria’s United Nations envoy, Bashar Al-Jaafari, recently said that the American Delta Crescent Energy company had “entered into a contract with the SDF, with the aim of stealing Syrian oil and depriving the Syrian state and Syrian people of the basic revenues necessary to improve the humanitarian situation, provide for livelihood needs and reconstruction.”

In other words, “while you were playing ‘watch the birdie’ the looting continued.”

Delta Crescent Energy company no doubt has shareholders, and I bet a dollar to a donut there are a lot of US congresspeople who have stock options. [delta] 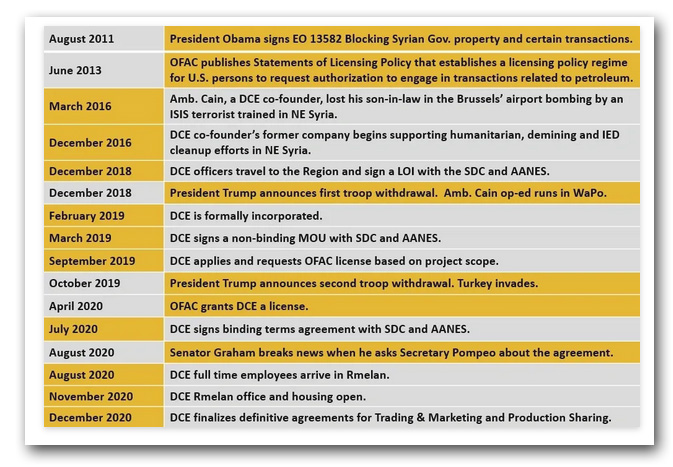 Now, you have the reasoning for the whole thing: Ambassader Cain, a DCE co-founder lost his son-in-law in the Brussels airport bombing by a terrorist trained in NE Syria. No, just kidding. It’s money. But don’t you love how humanitarian they are? This ought to now completely explain what all that nonsense was with the Kurds: the US used the Kurds to set up a militarized boundary where they could safely pump, pump, pump. Bingo: [politico]

An American company has inked a contract with Kurdish authorities in northeastern Syria to develop and export the region’s crude oil under a secretive deal approved by the U.S. government months after President Donald Trump announced he was leaving U.S. troops to “secure the oil,” multiple people familiar with the project told POLITICO.

The agreement reached by a little-known firm helmed by politically connected former military and diplomatic officials has already angered the government of Syrian President Bashar Assad, which does not recognize the Kurdish authorities as autonomous. The Syrian Foreign Minister called the deal illegal and said it is aimed at “stealing” Syria’s crude.

Congress ought to have been screaming about the corruption of this operation but they’ve got more important issues to deal with, like rigging the next election and preventing Critical Race Theory from spreading like wildfire and shredding people’s lungs so the wind up on ventilators, coughing their last breaths in a haze of drugs. Oh, that’s COVID? Well, Critical Race Theory and Antifa are a threat, people! But this ought to help you understand what really happened during the whole “withdraw from Syria except, uh, wait, we gotta keep some folks up in the North to protect the Kurds.” The US army and air force are being used to protect a smash-and-grab operation for oil, and the money is going in private pockets. By the way, Delta Crescent Energy is a Delaware corporation, and Delaware companies don’t have to report anything about their shareholders.

Remember, all of this is going down in a time when the US government is frantically lying about how it plans to help something something about climate change some time real soon – if by “real soon” you mean 2050. And we’re on track for a 6C temperature increase by 2100 if we stay on this course. The last time the planet was 6C warmer was during the Permian, see also: “Permian Extinction.” [wik]

But that’s not all, as they say! Remember the story about the 4 Iranian ships that were headed to sell oil in Venezuela? Well, the US is engaging in piracy on the high seas, only its legal because we gave ourselves permission to do it: [npr]

The U.S. has seized Iranian petroleum bound for Venezuela aboard four tankers near the Strait of Hormuz, enforcing a forfeiture order aimed at both Iran’s Islamic Revolutionary Guard Corps and the Caracas government, the Justice Department announced Friday.

The cargo was intercepted on Wednesday, under a warrant issued by a U.S. District Court over a July 2 complaint seeking the forfeiture of all petroleum products aboard the vessels. The property is now in U.S. custody, the Justice Department said.

At $56/barrel that’s a lot of money. But it’s OK because there’s a warrant, written by a US District Court, which apparently has jurisdiction over the government of Iran because we have a navy and F-35s and shut the fuck up.

In a statement Friday, State Department spokesperson Morgan Ortagus described the cargo as gasoline and said if the forfeiture is successful in U.S. courts, the proceeds could “support the U.S. Victims of State Sponsored Terrorism Fund instead of those engaging in terrorism, like the [Islamic Revolutionary Guard Corps].”

The proceeds could support the U.S. Victims of State Sponsored Terrorism Fund, which is probably managed with all of the care and equitableness of the Trump re-election campaign’s war-chest. In fact, it might be indistinguishable from it.

Here we have a clear case of crimes against humanity (“war crime”) committed openly by the US government, which forgave itself because it had to look forward, not back. You know, the US really is becoming “the world’s police” – except it’s the creepy donut-sucking cop who operates a speed trap and seizes nice cars and writes big tickets that go fund the police department’s ‘training’ budget. The cop who shoots kids in the back and lies about it, then blames them for getting killed so easily.

An AI Technique » « Read This