Marketing is an inherently dishonest profession, in my opinion; its purpose is to misrepresent and manipulate. The other day I was at the surviving local hardware store, and ran across a piece of marketing from my distant past.

When I was a teenager, we were constantly going to Stebbins Anderson, a hardware store out in Timonium, Maryland. It was huge and cavernous and maze-like and magical. I loved the smells, the stuff, and the helpful staff who you could collar and ask, “what is this for?” and they actually knew and would answer. As I grew up, I’d still bicycle out 15 miles to get stuff there, then bicycle back with my backpack full of sandpaper, glue, paint, boxes of 1,000 #4 steel washers (I made armor with them) and nobody remembers what all else.

One of the displays that caught my eye back then was a marketing display for PC-7 epoxy. It was compelling: a glass bottle with a golf ball epoxied to the top, a wooden arm epoxied to the side, and liquid in the bottle. For those of you who aren’t into adhesives, let me explain: that was a simple, clear, demonstration of a miracle. You could touch it and tug on it and by god it was stuck together. My dad and I were both impressed by it, to the point where, when we had a pipe leaking in the house, he let me try fixing it by sanding and grinding the pipe, packing it with PC-7, and wrapping it with electrical tape. I hope my dad lasts more good years (he’s 86 this month!) but that PC-7 repaired pipe is on course to outlast him. It’s on course to outlast me, too. 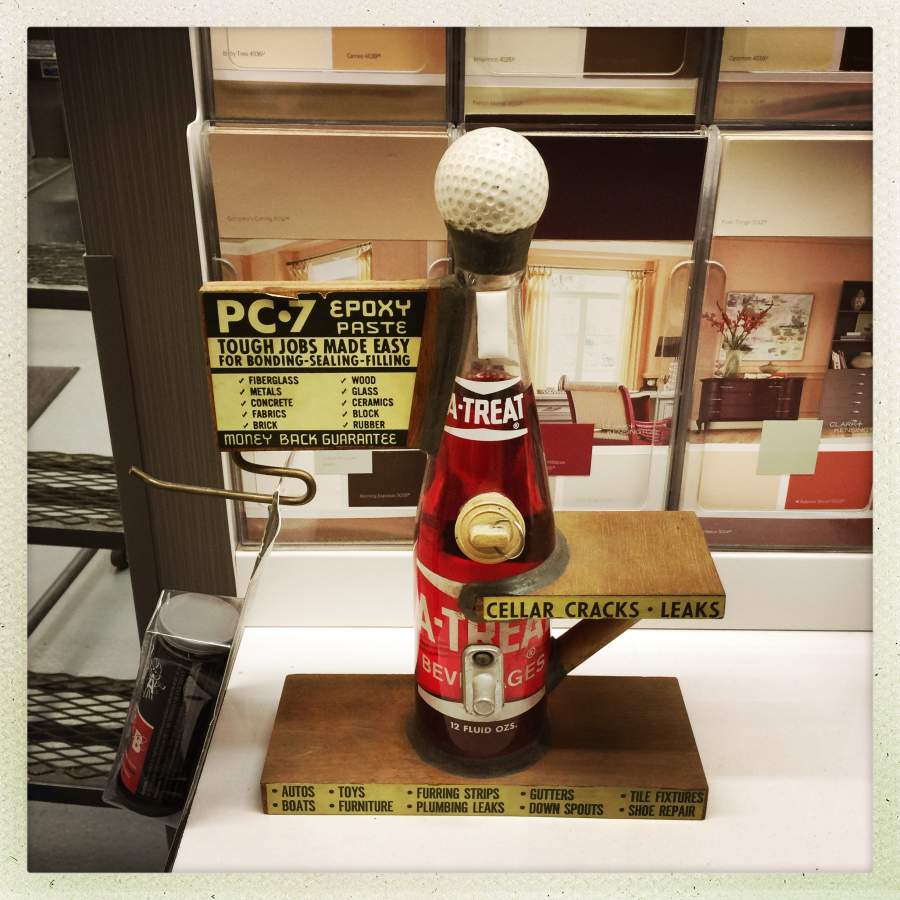 After that, I was so impressed I did some experiments; I was learning the scientific method and engineering processes in parallel. I remember the day I glued a hacksaw blade (slightly sanded to roughen it) to a plywood grip I cut with a coping saw, and I used it as a keyhole saw for years, until I accidentally broke it by stepping on it while I was working on a project. That’s one reason not to leave your tools on the floor. (my new reason is: they may be red hot) I sometimes glued weird scraps together so I could put them in a vice and hammer on them to see how the glue held up. It let me understand the difference between shear strength and tensile. I had a bicycle frame spontaneously disassemble when I hit a pothole on Bellona Avenue: I PC-7’d it back together and rode it another year or two until I upgraded to the Raleigh Super Grand Prix I saved for, for years – which was stolen 3 months after I bought it.

Back in the 1990s I was touring Burkittsville (where the Blair Witch was set) on my Ninja 600 with then-girlfriend, and the bike began to smell dangerous. We were stopped at a light and gasoline was dripping from the bottom edge of the tank, onto the cylinder head. No, really. I pulled over, we dismounted, and I explained that we were riding a bomb and repairs were necessary. By a quirk of fate, I had pulled up right outside an Ace hardware – I knew what to do! About 5 minutes later we were rolling again, with a gob of PC-7 jammed into the leaky spot of the gas tank, and a piece of duct tape molded around to hold it together. The PC-7 set perfectly, in spite of its natal gasoline-bath, and the motorcycle was fine for another 2 years until I gave it to Brett H, who cleaned it up and raced it, eventually wrecking it and breaking his leg in the process. Brett was lucky I was not there because after I recovered from fainting I probably would have tried to PC-7 his leg back together. 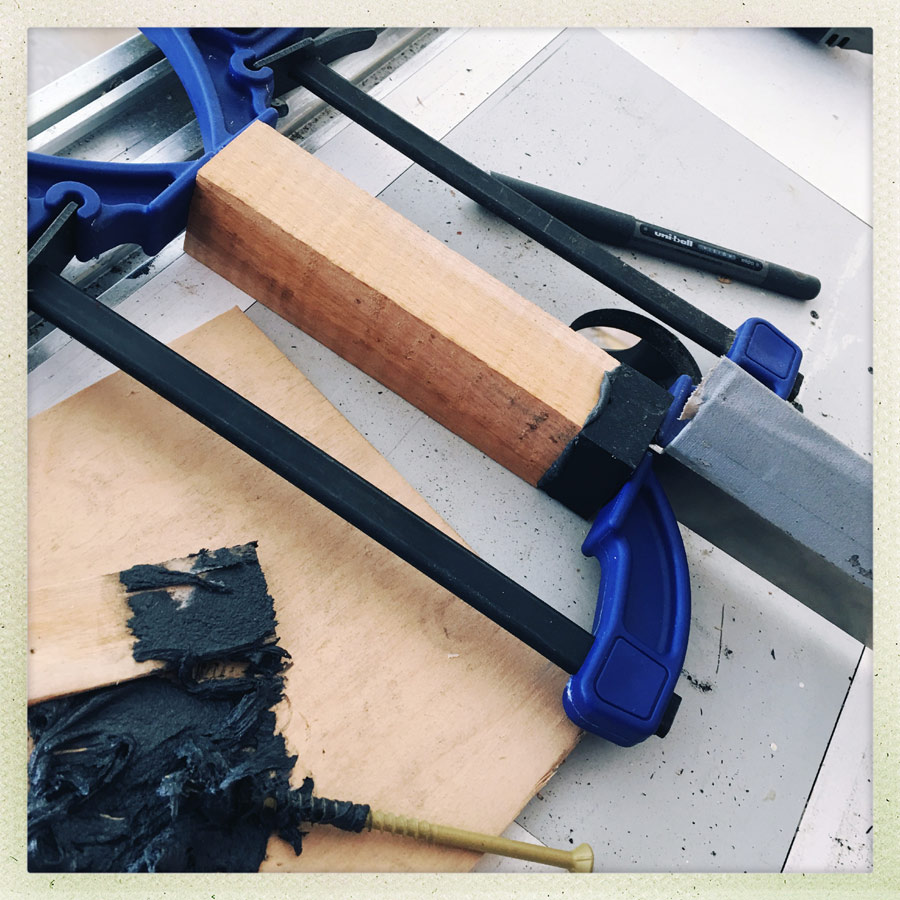 When I made my first knife, around 1976, the handle slabs were held on with PC-7 and I’ve glued up many a handle, since, and it’s always been PC-7. It has even been featured on this blog [stderr] before. It’s what holds every knife I’ve ever made together.

Much to my amusement, my friend Mike P, who is also a knife-maker, sent me a link to a bake-off someone did regarding epoxies. I immediately replied “if PC-7 didn’t win, they didn’t use it right.” PC-7 won. I still have not done it yet but I have a plan to make a silicone mold from a knife handle and grind a test blade, then cast the entire handle in PC-7. Come at me, bro! Mike’s suggestion was a handle of stainless steel chain wrapped around the tang and sculpted/filled with pure PC-7. Lots of PC-7. An aesthetic masterpiece of sorts.

So there I was in the Ace Hardware in Philipsburg, staring at this little marketing display of profound genius, with tears of joy in my eyes.

It’s not like I was running low, but I bought another pair of cans; I’ll use them eventually.

“surviving local hardware store” – when I moved up here there were 5 Ace Hardware stores within a 20 minute drive. Each of them was distinctive, and some had different inventory and various levels of skilled staff. One learned pretty quickly which Ace to go to if you needed a specific type of screw and didn’t want to spend all day foraging through the fastener indexes. They’re all gone, now, except one; crushed from the bottom by WALMART and from the flank by Loews and Home Depot. I’m not sure if I mourn Ace, though, since I remember when Ace was the great imperial doom-rollup that came along and put Stebbins Anderson and Kaufmann hardware out of business, then bought the remains. I’m not saying the people at WALMART and Loews are anything but hard-working home-building store-workers, either. I guess it’s just capitalism making the market more efficient – and making it harder to find #0 80 thread per inch gunsmith hex cap screws.

By the way, for those of you who spread adhesives: get some dentists’ spatulas. The secret to great adhesion is to get a small coating of adhesive completely covering the surfaces – and to do that, there’s nothing better than a machinist-straight polished stainless steel spatula.

What is the magic of PC-7 and its cousin J.B. Weld? I believe that the grey stuff is powdered stainless steel.