Recently, “Banksy” on twitter posted a bad meme, which inspired a furious, brief, friendly debate between me and a friend. I’d love to hear your opinions, as well.

Not to get too formal about this, but I find that when offering opinions, it’s best to include some “why” for context unless the opinion is purely aesthetic, in which case it may be hard to come up with a tangible reason why. 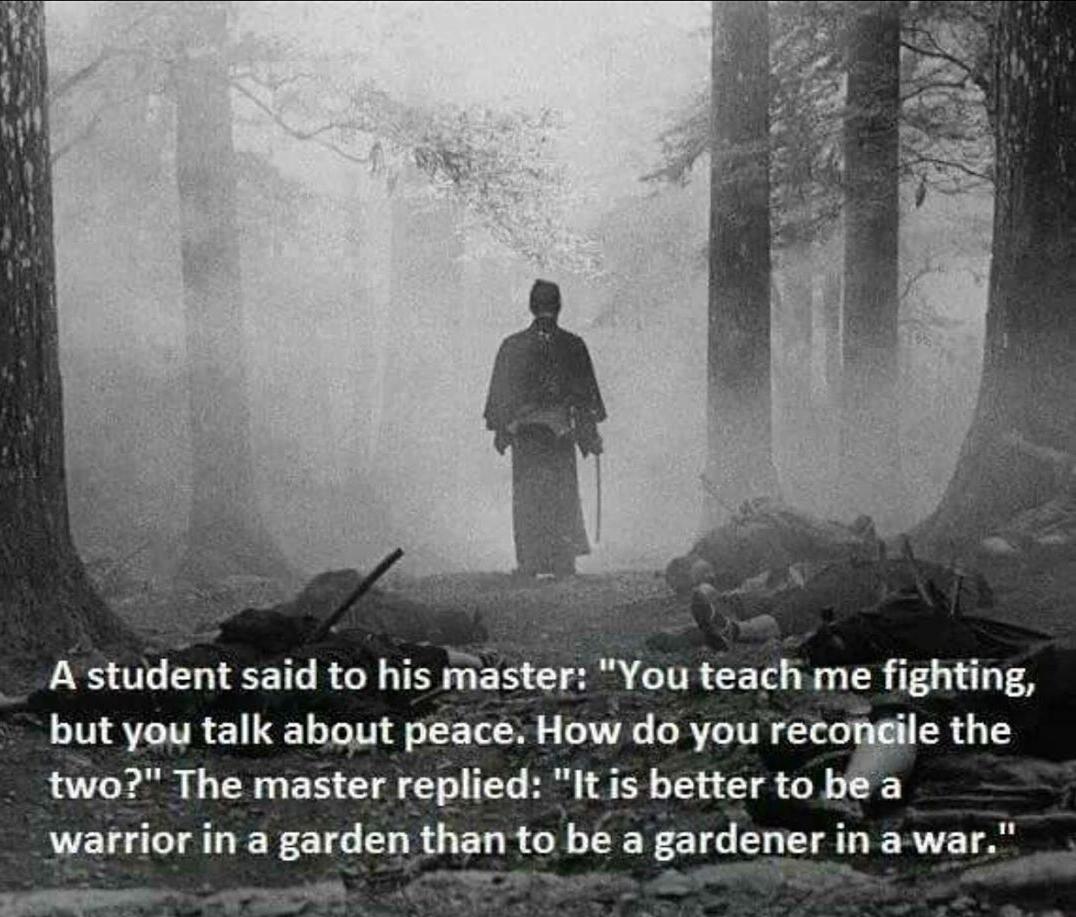 This is, of course, the woodland path scene from Sword of Doom, where Ryonosuke is attacked by Utsugi’s kin after the fencing match at the temple (where Ryonosuke kills Utsugi).* I commented back at the ‘banksy’ account that this was an inappropriate image because the character in that scene was exactly the opposite of what the image intends to express: he’s pursuing unsound methods and has fallen into a path of swordsmanship that is leading him in exactly the opposite direction from the samurai/swordsman’s ideal. Ryonosuke is what many would describe as a “nihilist” though I’d say he’s the opposite: he believes in killing. A lot.

Anyhow, my friend Bill fired back that the best swordplay scene in any movie was the duel between Kyuzo and the loud ronin in Seven Samurai. I countered that that was a fairly simple (though beautiful) scene and it was more a matter of fantastic context than great swordplay. After some back and forth, I offer this list:

I’m not sure what’s #6; I’m a bit on the fence really. Any suggestions or corrections? I lean toward the final fight scene in Goyokin. The duel between Hyoma and Ryonosuke is pretty amazing, too, thought it’s not exactly a “sword fight.” I love the Zatoichi movies but Katsu’s technique would just get him killed more or less instantly in a real fight.

Honorable mention: the scene where Shimoda is working his bow in the rain at the end of Seven Samurai is really incredible.

I know this is heavy on samurai movies, but that’s because that’s where I think the best effort is expended, cinematically.

*(corrected) I initially exchanged Hyoma (Utsugi’s brother) and Utsugi. That’s what happens when you go from memory! But if I fact checked everything I remember, I’d never publish anything because I’d be re-reading every book and re-watching every movie.

Walking Away With The Cake » « Bayesianism and Russian Hacking