“If you take out the biggest mouth, everybody just withers away, so you concentrate on the ones you believe are your organizers,” he said. “Once you identify that person, you can run computer checks on them to see if they have a warrant out or any summons failures, then you can drag them in before they go out to speak or rile up the crowd, as long as you have reasonable cause to do so.” [guardian] 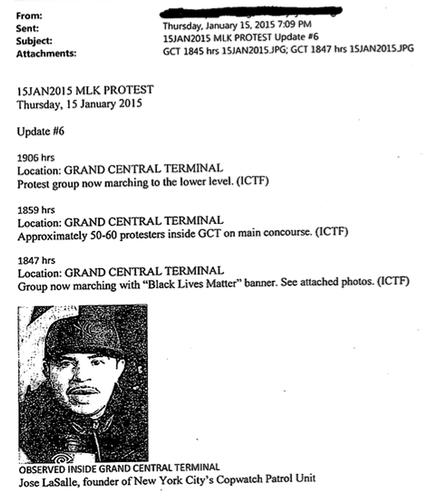 NYPD undercover cops participated in the Black Lives Matter protests following Eric Garner’s murder. [guardian] And they collected pictures of protesters, then (presumably) ID’d them against the FBI’s facial recognition database, and retroscoped them to see if there was anything outstanding that could be used to “drag them in before they go out to speak.”

This might explain some of the way that police want to round up protesters for any reason that they can, to charge them with whatever they can – because it tags the protester with an excuse to “drag them in.” The Department of Homeland Security fusion centers are part of where this is implemented: they share threat data between state and federal agencies. So, if you get arrested in a protest in New York, and you drive by a cop with a license plate scanner in Pennsylvania, you may get stopped and shaken down over any possible infraction.

I am assuming there that “private sector partners” are toll booth operations, parking companies, maybe phone companies. You should assume that they’re running their own copped-down version of xkeyscore [wikipedia] – basically a search engine with weighting algorithms that total up matches against threat profiles, or which allow analysts to query for an individual and get a dossier about their current location and activities. As always, with classified databases of secret stuff, citizens have no option at all to redress or correct wrong information about them – because they have no way of knowing the information is there at all. It’s a problem if your license plate, for example, gets scanned and matches incorrectly with that of a car used in an armed robbery. [stderr] 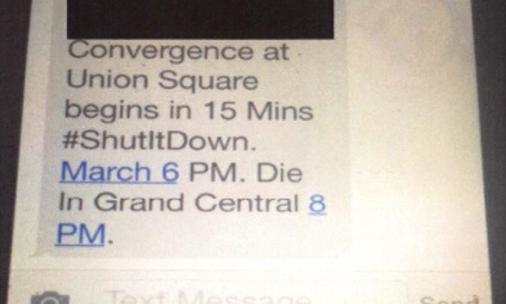 It’s right on the line of self-incrimination, they’re not exactly violating any law. But it’s setting up the situation so that – if the law changed to “shake down the muslims” it’d be a lot easier to automate. There are interesting questions, though, about how the cops got into the Black Lives Matter organizers’ communications, which they did:

Did some cop crane over a protesters’ shoulder and snap that, or were there cops embedded in the protest’s organization? It’s unsure; that’s also part of the problem. There will be more lawsuits, for sure.

Movement organizers have always suspected FBI agent provocateurs and spies. I remember when I was in high school and went to one of the “US out of El Salvador” protests in New York; some of the organizers were talking about how they were concerned that FBI provocateurs would create an incident. That seems like paranoia until you realize that it creates a win/win situation for the cops: either you get to round everyone up based on your confidential informant, or you’ve hamstrung the movement’s ability to organize because everyone’s less willing to trust each other and you can’t recruit new people because you don’t know if they’re just spooks trying to embed themselves.

As I’ve discussed elsewhere, the surveillance state has a big problem because it can’t use this kind of information to predict attacks – it can just use them to deconstruct them and arrest all the attackers’ friends and family afterwards. What happens if there’s a big terrorism incident and the word goes out to use all this data proactively? These systems represent aggregation of power and control; it’s all fine and dandy as long as we are willing to sit back and assume that they’re playing by their own rules and doing the warrants and probable cause dance, and the whole “innocent until proven guilty” thing. It’s distressing to me what thin controls those are, and how readily people fall for the fig-leaf.

A former high-ranking Brooklyn prosecutor has been hit with a federal indictment for forging judges’ signatures to get wiretaps so she could listen in on the calls of her reported love interest, a married police detective, authorities said Monday.

To keep her eyes – and ears – on narcotics detective Jarrett Lemieux, Lenich allegedly forged the signatures of multiple state judges for nearly 16 months. She allegedly carried out the forging fiasco by cutting judges’ signatures from legit documents and putting them on her phony orders. [ny]

Wow, those controls are pretty lame. Is the system really so simple and fallible that one individual can bypass it so easily? Of course not: someone got those phone messages, someone followed those phony orders. The police state wants you to believe that there is “masking” to keep it from being obvious whose data is whose, or to keep someone from just trolling through the databases, but it doesn’t look that way, really. It beggars the imagination that the warrant system is so flimsy that someone can effectively bypass it with some scissors and a copying machine. And that worked for a year?

The tactical use of the retroscope is equally problematic. If the system is so automated that a cop in the field can snap a picture of someone, identify them, and scan their past for cause to “drag them in” then that tells me there’s no cross-checks on any of this – the cop in the field can get access to whatever they want. It’s no problem because it’s not a “search” …  It’s OK to send sleeper agents into a movement – to treat them like Al Qaeda or the Weathermen – because they might get violent, someday. It’s OK to collect as much as possible within the very letter of the law (let the NSA and CIA go past that, of course) and now law enforcement may selectively get access to the NSA’s data “before privacy controls” (whatever that means) – it seems to me like the whole situation is backwards and on its head: the people who are most likely to go off the rails and hurt someone are the cops. The people who are most likely to fire thermobaric bombs into a wedding are the CIA. The people who are most likely to hack your computer are the NSA. The people we have the least reason to trust are the ones we are expected to trust the most, while they treat us as suspicious militants. We have police agencies all over the country that have had to negotiate settlements with the Department of Justice regarding illegal, racist, and heavy-handed behaviors – and at the same time we’re expected to just trust them with these power tools. It seems like a bad idea.

A Matter of Light » « Ash Sha’irat