Adam Curtis has another movie out. If you’re an Adam Curtis fan, you don’t need to read any more.

It’s called “Hypernormalisation” and it’s on bbc player (or you can see it on youtube, where it will be regularly taken down for copyright reasons) Links are at the bottom.

I’ve been fascinated by Curtis’ documentaries for some time. Watching them gives me a sense of what it must feel like to be a conspiracy-believer: there’s an underlying reality that moves and shakes everything, which we don’t really understand but glimpse flickeringly through Curtis’ narration. What I believe Curtis is doing is identifying emergent conspiracies – things that are inflection-points in history, which probably could have happened anyway, but when you look at them closely, you notice some of the same people involved, and it all looks very much like there’s a deeper reality. But if we step back, and look carefully, we realize that Curtis is identifying small cogs in bigger trends: imperialism, corporatism, partisan politics – and, yes, sometimes those small cogs are in two domains at once; it doesn’t mean there is a conspiracy, it’s just that life is complicated. 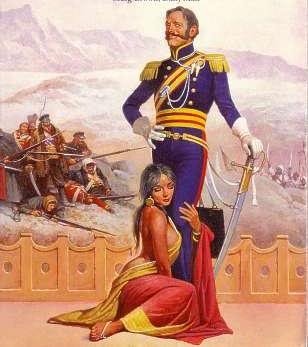 Here’s an antidote to Curtis’ worldview: Harry Flashman. George MacDonald Fraser’s smaller-than-life character in historical fiction gets positioned in all of the interesting military events of the victorian british empire. If Adam Curtis were doing a documentary about the opium wars, for example, he would place his finger on Flashy, and follow him about: he’d look like the mover and shaker that made tremendous things happen – but as Flashy takes care to ensure us, he did most of it trying to escape the call of duty, angry husbands, or gambling debts.

The thing that is so fascinating about Curtis’ work is that it’s completely right, as far as it goes: his analysis is deep but shallow: yes, the US has been involved in Afghanistan for much longer than most of us realize and, yes, small actions lead to large consequences, but … it’s not that simple. Correlation does not imply causation, and the presence of Flashy at all those events doesn’t mean he was there for any reason other than that Lola Montez lured him into her boudoir.

Curtis’ assertions and the confidence with which he delivers them, the music, the timing, the visuals – it’s brilliant and compelling. If Curtis actually decided to lie and manipulate, or to play politics, he’d be an amazing weapon.

Those who ran the Soviet Union had believed that they could plan and manage a new kind of socialist society. But they had discovered that it was impossible to control and predict everything and the plan had run out of control. Rather than reveal this, the technocrats began to pretend that everything was still going according to plan – and what emerged instead was a fake version of a society. The Soviet Union became a society where everyone knew that what their leaders said was not real because they could see, with their own eyes, that the economy was falling apart. But everybody had to play along and pretend that it was real because noone could imagine any alternative. One Soviet writer called it “Hypernormalization.” You were so much a part of the system that it was impossible to see beyond it. The fakeness was hyper-normal.

Some of the characters in this latest film are immediately familiar. I got a laugh out of his brief description of Donald Trump and his role in the transformation of New York City into a place for the moneyed class.

I love this stuff, but I am careful to remind myself that Curtis’ view is an analysis of emergent events, not an exposure of an underlying conspiracy. I think the problem (if “problem” is the right word) with Curtis’ explanation is that he heavily uses the language of intentionality: politicians have plans and expectations and events are controlled. My own skeptical nihilism regarding cause and effect doesn’t buy Curtis’ analysis. I would say that politicians have expectations but they’re largely limited to “what will I have for lunch?” and “oh god I hope that intern I groped keeps their mouth shut.” I don’t see the world as controlled by dark powers, per Curtis, but rather by an army of Harry Flashmen, mostly praying Ray Wylie Hubbard’s prayer.*

Youtube has a large number of bogus versions of this, which just tell you to click over to some cheesebrain’s banner ad filled site. Check the runtime of the video before you follow it:

A friend of mine and I spent a few days binge-watching “Veep” last fall, and all I could think was that the show wasn’t a comedy, it was a documentary. I loved the way that molehills turn into mountains, or important things get trivialized, because of egotism, laziness, incompetence, and bad timing in the halls of power. And, based on my very limited experience working around the White House, that’s how it is: there’s a great big bullshit field that sucks in everything around it, and pretty soon everyone is brown and swirly and has no idea what’s going on. If you want to do an exercise, watch an episode of “Veep” before and after an Adam Curtis show.