Here, Epicurus offers an answer to one of life’s perplexing questions, which is “why is it that for some people, there is simply no such thing as ‘enough’?”  Most of us, at one time or another, have wondered “Why isn’t $50 million enough for that guy? Does he really need $500 million?”  More to the point, we wonder about the incremental value of another million dollars to any one rich person. Yet we can all think of rich people for whom there is simply no limit.

Indeed, our global society today has been captured by rich people for whom there is simply no limit. It’s not enough to win the class war, it’s as if they have shifted from wanting to win to wanting to see everyone else lose. Epicurus’ observation encapsulates this. Epicurus argues that people who find themselves wanting unlimited wealth have made a category error:

We can agree that being wealthy or powerful can go a long way toward protecting against misfortune. And we can also see, through Epicurus’ explanation, why for some class warriors it’s not just enough to win – they want to see everyone else lose: subconsciously or otherwise they want to increase the disparity between themselves and everyone else in order to make it harder for everyone else to somehow attack them. Epicurus would point out that they are actually placing themselves more at risk by doing so: this is why we see wealthy people live in gated communities with security guards and private armies. They know they are hated and they’re not going to stop the activities that make them hated or limit their desires – instead they’ll defend themselves.

Does this make them happy? Of course not. Epicurus explains:

A person who is greedy but is not honorable and just is going to be unpopular, which means that they cannot enjoy the fruits of their gains. Hidden within this is another idea, namely that inheriting one’s wealth does not make others see a person as honorable or just. Perhaps we all acknowledge that they are lucky, but they haven’t done anything deserving of our respect – a wise person born into wealth would do what they could to use the tool they were born in possession of to do wise and honorable work with it. A great example of how not to do this would probably be the Koch brothers, who appear to be similar in respects to newly born praying mantises that begin their lives by eating any of their kin that look vulnerable and tasty. 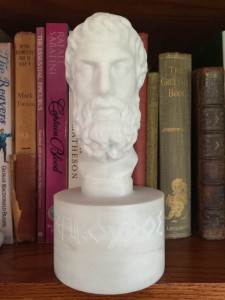 (A few years ago someone 3D scanned and uploaded a geometry of a bust of epicurus. If you put a chunk of marble in a correctly programmed CNC machine, you get this)

If the things that produce the pleasures of profligate men really freed them from fears of the mind concerning celestial and atmospheric phenomena, the fear of death, and the fear of pain; if, further, they taught them to limit their desires, we should never have any fault to find with such persons, for they would then be filled with pleasures from every source and would never have pain of body or mind, which is what is bad.

Epicurus puts his finger on the crux – that profligacy needs to learn how to limit its desires. Indeed, a profligate person who limits their desires is going to fly below the radar screen of the rest of society. For example, if the Koch brothers had simply been satisfied with the money they inherited, invested it wisely, and spent their lives snorting cocaine, washing it down with vintage port, and living lives of quiet luxury, nobody would particularly despise them. Epicurus would say, further, that if they spent their time doing wise, honorable, and just works, nobody’d begrudge them their cocaine and bentlys. In Epicurus’ terms, it’s pretty easy to be a likeable rich person – you merely need to understand why you wanted to be rich in the first place, stop expanding your desires once you have fulfilled them, and seek to live a wise, honorable, and just life.

Protection from other men, secured to some extent by the power to expel and by material prosperity, in its purest form comes from a quiet life withdrawn from the multitude.

Of all the means which wisdom acquires to ensure happiness throughout the whole of life, by far the most important is friendship.

I put these two observations together, though usually they are listed with others separating them. Epicurus’ philosophy of life led him to be remarkably egalitarian for his time, and to live slightly removed from society. Unlike many of the philosophers of his time, Epicurus accepted women as students and didn’t own slaves. The Epicurean school was called “The Garden” because it was, literally, Epicurus’ garden, in a house located about a day’s walk outside of Athens. Friendship and good company was one of the key pleasures in life, though he allowed that a person needed “water, bread, weak wine and a ”pot of cheese’.”

It is friendship, wisdom, and just life that I’m sure Epicurus would wish to be remembered for, though he is commonly remembered as the formulator of the famous Paradox:
Is god willing to prevent evil, but not able? then is he impotent. Is he able, but not willing? then is he malevolent. Is he both able and willing? whence then is evil?

The paradox made him rather unpopular with the authoritarian cult of christianity, when it arose, and he was demonized (quite inaccurately) as an “Epicurean” – a debauched pleasure-seeker. While Epicurus was content with bread and cheese, the christians made him out to be a hedonist bingeing on cocaine in the back of a bentley. That appears to be a great injustice to the memory of a gentle, thoughtful, feminist, anarchist.

Yet, an inscription over the gate to The Garden read:

Stranger, here you will do well to tarry; here our highest good is pleasure.

The doctrines above are from Epicurus’ Principal Doctrines – the list of his most important observations about life, as brought forward through time by Diogenes Laertius.