Clearly, residents of this state are the problem. Look what this wretched Minnesotan did.

A Minnesota man who admitted shooting a 17-year-old girl multiple times because she asked him to stop trespassing on his riding lawnmower has been charged with attempted first-degree murder.

According to a criminal complaint obtained by The Associated Press, 40-year-old Chad Pickering shot the 17-year-old girl in the chest, right thigh and left ankle while she was standing on the deck of her Bemidji home on Monday night.

“The victim herself was able to describe what had happened and talk to us and tell us that she’d simply been shot when she stepped out of her house to check on her dogs,” Sheriff Phil Hodapp explained to WCCO.

The teen told investigators that she had asked Pickering not to ride his lawnmower through her yard. She also said that he often carried a pistol with him on the lawnmower.

That’s just the way Minnesotans are…

Oh, wait. Wrong word. Not Minnesotans, but rather assholes with guns.

Well, I’m exaggerating a bit — he hedges on it being a good possibility that might produce a good show.

Experts are predicting we may be in for quite a show: a brand spanking new meteor shower that will peak on the evening of Friday, May 23, 2014! Folks in the United States and Canada have the most favored viewing locations for this event (but that doesn’t mean you should forget about it if you’re elsewhere). Predicted rates for this new shower are quite high, about 100–400 meteors per hour, far higher than normal showers. And they’ll appear to be coming from an area of the sky near the north pole, so they should be visible raining down all over the sky!

I checked the weather report for my area, and it’s supposed to be “mostly sunny”, so I imagine that means patchy clouds in the evening, so not perfect viewing conditions. However, where I live, I can drive a mile out of town and find perfect darkness and a total absence of any artificial lighting, so that might offset the lack of flawless weather. I might give it a shot.

And if it doesn’t pan out, I can wag my finger at Plait on Saturday morning.

The tradeoff for small town movie theaters is that you have to maximize your attendance, and that’s tricky in a place split between liberal weirdos at the university and narrow-minded Christian conservatives in town. So we get double-bills like this: 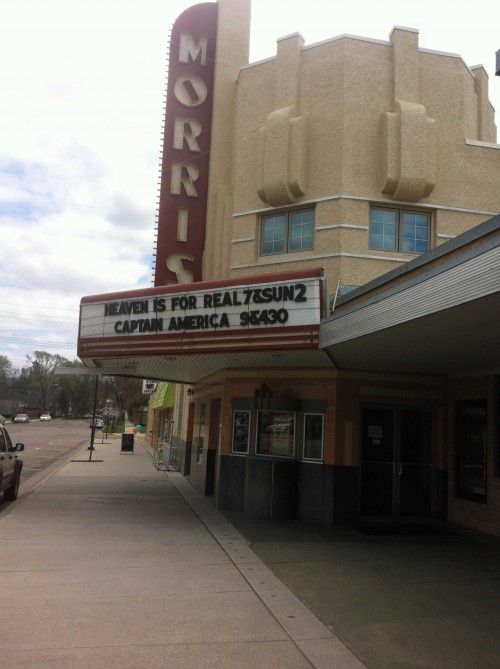 I’d like to see one of them, even though I’m getting tired of the genre. Can you guess which one?

As for the other one, the only question is…how much will you pay me to sit through it?

It gets even more fun next week, when the two movies in town will be The Grand Budapest Hotel vs. God’s Not Dead. I don’t think there’ll be much overlap between the 7:00 and 9:00 crowds.

When I expressed my disgust with the lunatic fringe on campus that published the North Star, I also said, “We do have conservative students here — I expect that the majority are more conservative than I am — but they also trend towards being more the reasonable, rational, educated sort of conservative.” Sometimes I fear that’s just my optimism speaking out, but then today I just got this nice letter from the College Republicans. 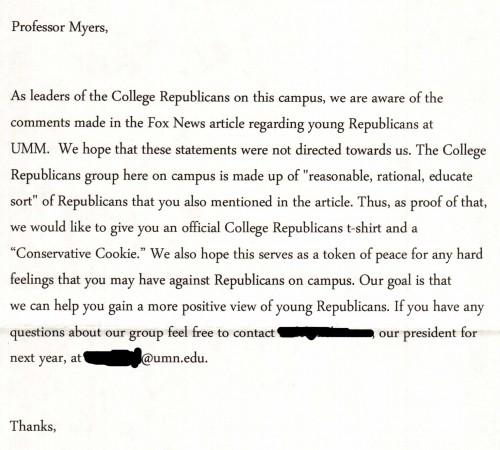 See? They’re not all far right wackaloons. The t-shirt isn’t exactly to my taste — a teddy bear holding a pistol with a word balloon that says “College Republicans believe in the right to bear arms” — but I can accept it in the spirit of reconciliation in which it was offered. Of course, I’m not going to wear it…even a loose shirt is uncomfortable with the trench excavated in my back right now. The cookie was tasty, though.

I’m going to be doing an interview on our campus radio station, KUMM 89.7 FM — The U90 Alternative, tonight between 6 and 7pm Central time. They do have online streaming, and it’ll be interesting to see how well it holds up.

We’re going to talk about the North Star silliness, I guess. It might be just ten minutes of me laughing.

He was attending with his protege, James O’Keefe.

O’Keefe has acquired some notoriety for dishonest stunts in the name of far right wingnuttiness. Among them was the Landrieu break-in.

According to reports, on January 25, 2010, O’Keefe and his friends Joseph Basel and Robert Flanagan visited the New Orleans office of Senator Mary Landrieu. Basel and Flanagan disguised themselves as repairmen, and attempted to access the office’s telephone system by saying there was something wrong with the phone lines. O’Keefe was in the office and videotaped the some of the events with his cell phone camera. Office workers smelled a rat and called the authorities. The three of them were arrested, along with a fourth man Stan Dai, and charged with entering federal property under false pretenses with the intent of committing a felony. 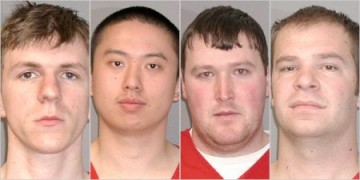 Notice the guy on the right? That’s Joe Basel. It’s a bit embarrassing, but he attended UMM a few years ago — we did not get along. I do find it amusing that one of his complaints was that the university ought to remove all reference to me from its website, because I offended him. So if O’Keefe was Breitbart’s protege, Basel was O’Keefe’s — I guess he’s kind of a third rate Breibart imitator, which is not something to be proud of.

Basel previously was the editor (or some such role) at the Counterweight, the conservative alternative newspaper here at Morris a few years ago. He is now the CEO of something called the American Phoenix Foundation, which is yet another wingnut ‘thinktank’ with a mission.

The mission of the American Phoenix Foundation is to protect the American Republic through ethical, innovative, and technologically driven journalism.

A descendant of Breitbart/O’Keefe/Basel is protecting ethical journalism? OK. I’m laughing, but OK.

Thankfully, Basel is now gone from UMM, and the Counterweight is defunct. Unfortunately, its successor is that rather nasty racist rag, The North Star. It’s editor, John Geiger, was named a Phoenix Fellow by the foundation last year.

Breitbart → O’Keefe → Basel → Geiger, all with a nice infusion of racism throughout. It’s all kind of ugly and incestuous, isn’t it?

Just so you know, that pathetic campus newspaper, the North Star, which published defamatory accusations that various UMM faculty and administrators were racist because they didn’t give special privileges to white students, is still pushing hard to sue me. They have no grounds to do so; their accusation is that because they detected a “sciencey” smell of chloroform near racks of their rag that were stolen, I must have done it. Their lawyers have been demanding that the university fire me, to which our chancellor has replied with a clear “no.”

But I warn you because I just got off the phone with a Fox News outlet in the New York area; they were asking lots of questions, and apparently the North Star lawyers are distributing their intimidation document far and wide now. The interviewer was deeply offended that I said Fox News has an extraordinarily poor record for journalistic integrity; they said I was impeding the Free Speech of those poor students (they seem to take it for granted that I stole those stupid newspapers); they were outraged that I said this lawsuit was attempted harassment, trying to silence me; and they treated the fact that the campus police asked me questions about the thefts as clear evidence that I was guilty.

Anyway, get ready. It will not be a friendly report, expect a few East Coast wingnuts to show up once it’s out, whining in that wingnutty way and demanding that we respect their entitled inanity.

The movie Fargo warped the image of Minnesota—and now the FX channel is going to be showing a new, 10 episode miniseries titled… Fargo, starring Bilbo Baggins with a Minnesota accent.

An original adaptation of the Academy Award®-winning feature film, Fargo features an all-new “true crime” story and follows a new case and new characters, all entrenched in the trademark humor, murder and “Minnesota nice” that made the film an enduring classic.

Yep, that’s exactly what living in rural Minnesota is like: funny accents, and grim, understated humor over all the dead bodies littering the snow. It’s a sensibility that has always informed my blog, dontchaknow.

Sure, I know the meaning of words.

It is snowing in Morris.

In addition to be buried deep in grading, tonight I’m hosting our monthly Cafe Scientifique.

The next Café Scientifique will take place on Tuesday, March 25, at 6 p.m., at the Common Cup Coffeehouse (501 Atlantic Avenue, Morris, MN 56267). Brad Heins, assistant professor of organic dairy management at the University of Minnesota’s West Central Research and Outreach Center (WCROC), will lead the discussion, “Organic Food: Fact or Fiction?” All are welcome to attend. Audience participation is encouraged.

Oh, yeah, I’m also about to step into non-stop class/meetings/lab, not to emerge until 6pm, and then racing off to the coffeehouse, so you may not hear much from me today. It was extremely annoying that FtB was moribund all morning, my normal blogging time.