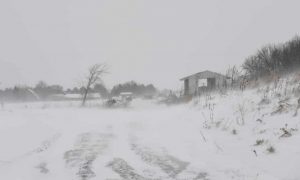 That’s kind of how I picture my great-grandparents’ farm. I should look it up someday.

It certainly is strange to read an article in the Guardian which mentions all these little towns in my region of Minnesota. Who has ever heard of Greenwald, or Dumont, or Chokio, or Kerkhoven? These are tiny little towns that I know of because they’re within 50 miles of me, but why is an English paper writing about them? Also, the article talks about a lot of things I was thoroughly ignorant of, despite living here.

The issue is the ongoing consolidation of dairy farms in Minnesota. My great-grandparents were dairy farmers in another teeny-tiny town north of here, Fertile, Minnesota, but they gave up on their small farm around about the time of WWII, when one of their sons invited them to live by a real fjord out in Washington state, but that loss was part of an ongoing process. Small dairy farms can’t make it anymore. Now you have to run a mega-factory farm. These are huge operations.

Dairy conglomerate Riverview LLP is​ by far the largest mega-dairy operation in the state. ​​​At the company’s flagship dairy in Morris, Minnesota, ​10​​​​,000 cows wait expectantly for the feed truck. In the “nursery”, a still-wet calf, its umbilical cord dangling, struggles against a worker who tilts back the small head and inserts a tube of colostrum all the way to its stomach.

At one day old, calves are strapped into vests, machine-lifted into a truck and transported 10 miles away to the company’s calf facility. A few days later, they are trucked more than 1,000 miles, ​either to New Mexico (if bound for the beef market) or Arizona (if destined for dairy) – a move that Riverview says is for the warmer weather.

I had no idea. I guess I need to get out more, because as a non-farmer I didn’t have a clue about what’s going on right under my nose.

Despite a ​55% nationwide decrease in dairy farms between​​ 200​2​ and 2019, cow numbers have held steady and fluid milk volume has increased – a fact that illustrates a trend toward fewer farms operating on much ​larger scales.

Between 2012 and 2017, ​Minnesota lost 1,100 dairy farms.​ In contrast, those years marked enormous growth for Riverview as it built ​three​​​ new Minnesota ​mega-​dairies, a feedlot in South Dakota ​and expanded ​its calf and dairy operations ​to New Mexico and Arizona.

Are these mega-farms better for the environment or for the people who work the land than numerous smaller farms distributed over a wider area? Probably not.

One of those potential neighbours, a ​crop farmer in Dumont, Minnesota, says a Riverview official visited him in April 2019 and shared a plan to build a 24,000-cow dairy ​​​a​ mile away. The official offered to buy the farmer’s corn for feed, and to sell manure to him as fertiliser. The offer was declined. “I said, I’m not very interested in that because you’re not paying enough for the product, and you’re charging too much for the manure.”

​​The farmer – who asked to remain anonymous – was also horrified by the idea of so many cows so close to his home. He worried about odour and air quality, wear and tear on the roads, manure leaching into streams and rivers, and the demand on the groundwater supply. “I’m telling you, it’s scary they’re going to come in here and suck that much water from the ground,” he says.​​

The 24,000-cow dairy has not ​​been built but, ​according to state records, the company has applied for a permit to build a 10,500-cow dairy approximately ​130 miles north in Waukon Township.​ Additionally, an application for another 10,500-cow dairy, in Grace Township, is under review.

I’ve been to Grace, but had to look up Waukon — it’s up north, near Fertile. These towns are tiny, between 100 and 200 people, and they’re planning on farms that hold a hundred times that many cows.