Way, way back in 2007, a guy in Morris decided to generously donate a great big fancy electronic carillon to the cemetery near my house, which was nice. Except that he programmed it to play hymns and patriotic tunes loudly, every 15 minutes, all day long, every day, from 5am to 10pm. He lived nowhere near his giant cheesy loudspeakers. I did. I complained. Other people in the neighborhood complained. Nothing was done, because this is small town America, and how dare you question a person’s right to screech Sousa marches and Lutheran hymns into your ears all day long are you some kind of commie pinko atheist or something? It went on for a few years (millennia?) with constant complaints & letters to the paper & some brave hero cut the wires & it was repaired & the guy left town in a huff & took his precious colossal beep-boop Nintendo away with him & donated it to a more grateful town in Arizona where the residents appreciate his contributions to the spiritual life of the community.

He has retired and moved away, but he still writes in to the Morris paper to tell us how much the carillon is loved in its new location, or how he visited some other town that had one and they adored it, and how Morris is full of philistines and liberals.

Well, Ted Storck is back in the paper again. 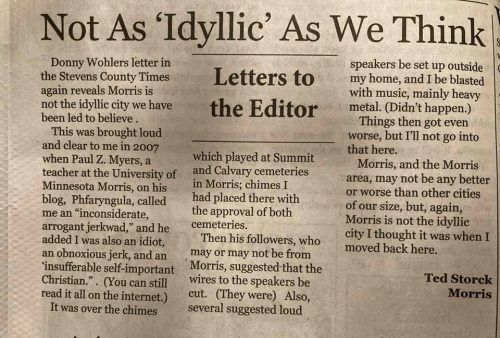 He’s still nursing his resentment. His account is accurate, as far as it goes. The bit where he says Things then got even worse… and refuses to say how is a little misleading, though. What happened, as I recall, is that town officials finally asked him to turn his music down and maybe play it a little less frequently, which I think is what prompted his hissy-fit and his decision to take his toys away.

It’s silly and stupid, but I have to note that Ted Storck has been seething in rage for fourteen years now and is focused on me as the source of his impotent grudge. That’s not good. I’ve had many obsessed haters over the years, but they all tend to be far away and more into railing at me over the internet. This goon knows where I live, and apparently visits the area now and then. I’m a little worried that some day I might open my door and there’s Ted Storck with a shotgun, and that’s how my story ends, blown away over a petty, small town dispute by an “insufferable self-important Christian” who can’t even spell “Pharyngula”.

The prodigal spider returns, and my cabinet of optical curiosities » « Let’s be perfectly clear