Once again, local old coot Ted Storck has a letter published in the local paper. He needs a friend to take him a side and explain to him that he’s looking a bit obsessive, obnoxious even, or maybe to just say, “Shut up, Ted.” He’s still upset that the neighborhood got tired of his loud, repetitive chimes, so he feels the need to explain himself, and he’s reading articles in the National Catholic Register to explain how it’s Satan that led to the removal of his noisy electronic gadget. 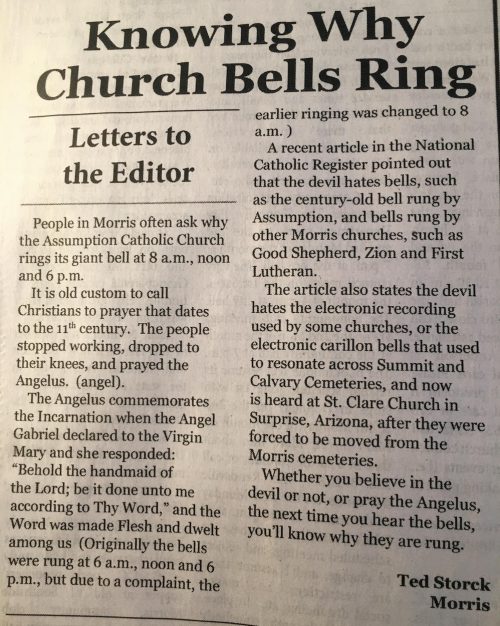 Awww. The article also states the devil hates the electronic recording used by some churches, or the electronic carillon bells that used to resonate across Summit and Calvary Cemeteries, and now is heard at St. Clare Church in Surprise, Arizona, after they were forced to be moved from the Morris cemeteries. If I were to read that aloud, I’d be sure to break into melodramatic sobbing as I got near the end of the sentence.

Clearly, the problem was that the devil moved into the corner house a block south of the cemetery, and has triumphed.