On October 9, 2017, the CEO of a UK charity called Mermaids released a statement regarding her support of gender variant youth, reproduced below. Just a day later none other than Jesse Singal chimed in claiming that this supportive charity was not being roasted for saying the same thing he said. Now Jesse Singal is one of the regular subjects on this blog due to the combination of his wide reach and his stunning incompetence when it comes to covering trans issues. That he continues to be paid to write on them is certainly a detriment to my health.

The particularly annoying thing about Jesse Singal’s type of wrong is that there are layers to it. I could just throw up my arms and say “no” but he makes an illustrative example of the overlapping assumptions most people carry with them while they are uninitiated on trans topics. So I’m feeling generous. Despite the fact that Jesse Singal is extremely unlikely to ever encounter these words or engage with them seriously on account of my “trans hysteria,” I’m going to spell it out for him.

Let’s start with the trans support charity called Mermaids. This is their October 9 statement, and we’re interested in the first paragraph. I’ve added the bold emphasis:

That’s the statement from Mermaids. Now, they weren’t being roasted for this statement because everything in the above paragraph is absolutely true. However, it’s also not what Jesse Singal has said in the course of his career as a transphobic sock puppet, contrary to his incredulous October 10th tweet: 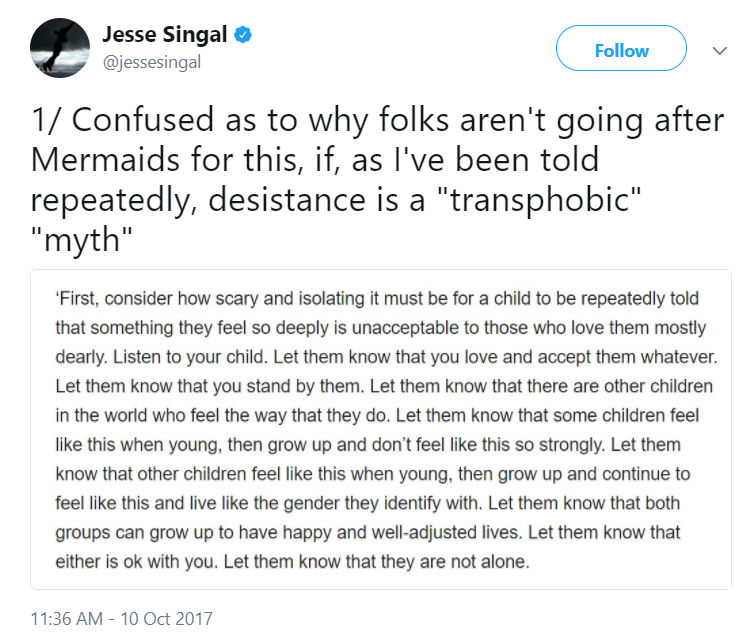 Image: A screencap of a tweet saying “Confused as to why folks aren’t going after Mermaids for this, if, as I’ve been told repeatedly, desistance is a “transphobic” “myth”

The first layer we need to peel back to understand the amount of concentrated bafflegab Singal has just inflicted on the world starts with a care process for gender variant youth typically called “gender affirmation.” When we last contacted a gender affirmative practitioner, Dr. Diane Ehrensaft, she noted in my correspondence that “gender variant youth” is actually a super-group, with three smaller groups of people within that, all of whom have distinct medical needs:

The reason these three different groups exist under one umbrella, only the latter two of which might have any connected etiology, is that most parents will consider the possibility of a gender variant identity based solely on whether or not a child can perform their expected gender role. Now that us insidious trans activists have succeeded at planting (some) vocabulary useful to articulating gender variance, more well-meaning but largely ignorant cis parents are considering the possibility that their gender role non-conforming children might be trans, and so seek out a gender identity clinic.

This is an important observation so I’ll repeat it a few times: These clinicians know this. Gender affirmative practitioners are well aware that a majority of their patients will be referred to their care simply for not conforming to the expectations specifically thrust upon them because of their assigned sex. I repeat: Gender affirmative clinicians know they have three different populations among their referrals because most cis parents can’t be expected to truly understand what gender dysphoria is. The parents requesting these referrals are not the experts and often do so based on, ironically, the poorly digested soundbites propagated by shitty journalists like Singal himself.

So what does gender affirmative care offer for these three populations? Dr. Ehrensaft explains in the material she sent me: 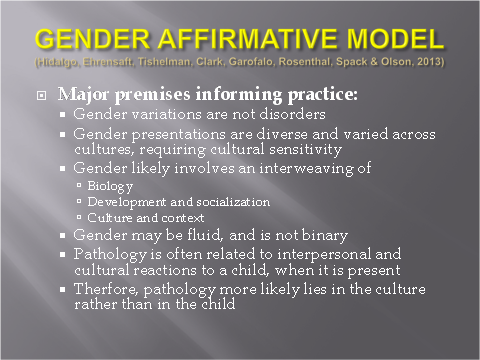 The first bullet point is that “gender variations are not disorders” and that the pathology, if present, “is often related to interpersonal and cultural reactions to a child.” In other words, the only common element for all three populations is the need for counselling to cope with the effects of bullying. The fourth bullet point is a key admission that Jesse Singal frequenly omits when he wants to smear trans healthcare: “Gender may be fluid, and is not binary.” This is an admission by the healthcare provider that many of these children will articulate clearer identities in adolescence that do not necessitate a transition.

The objectives of gender affirmation are shared as follows: “[to facilitate] the youth’s opportunity to live in the gender that feels most real and/or comfortable.” To that end, gender identity clinicians have to grapple with the other two patient populations: Gender questioning youth and gender dysphoric youth. In the former, Dr. Ehrensaft explains that non-judgemental, non-coercive counselling can give youth the space to question themselves in a low-risk environment. The patient takes the lead, and the clinician isn’t trying to push the child in any direction. It is only the children who continue to express significant distress after Tanner Stage 2 of their puberty who qualify for hormone blocking, and if persistently gender dysphoric until 16, hormone replacements. This protocol is examined in detail by Zinnia Jones–even though it acknowledges the existence of trans teens, she still concludes its requirements are, if anything, conservative, and probably still denying treatment to gender dysphoric youth who would benefit from it.

By contrast, Jesse Singal’s first foray into the realm of trans issues (at least that I’m aware of) is a fawning apology for Dr. Kenneth Zucker, a physician whose methodology involves ranking cisgender and transgender as mutually exclusive outcomes, with outwardly cisgender (no matter how miserable) being considered preferable to outwardly transgender (no matter how happy or relieved). In other words the stated objective of Dr. Zucker’s methodology had nothing to do with the youth’s opportunity to live as was “most real and/or comfortable,” and instead the stated objective was to make an outwardly self-professed trans identity so harrowing that questioning teens would closet themselves for their own safety.

Now that brings us full circle to the Mermaids statement. Susan Green, on behalf of the charity, writes that “some children will grow up to feel differently,” referring to the gender role non-conforming children who did not experience elevated distress upon reaching Tanner Stage 2 of their puberty. Green also says, without any moralistic adjectives, that some children will continue to feel the same, referring to the children distressed by their sexed attributes who will (unsurprisingly) remain distressed when they hit puberty. The whole point of Green’s statement is that the two groups of children, and the third group in-between who are uncertain, are all valid. Regardless of how they understand themselves, they will all be loved. This is a far cry from Kenneth Zucker’s methodology, which explicitly institutionalized hostility towards one of the “outcomes,” with its proponents going so far as to admit that the trans kids in their care would require therapy from their “therapy”! As long as journalists can continue to write about this research without pointing out that this constitutes an admission of malpractice, we will not be able to trust journalism for accurate perspectives on trans issues.

Lastly, I explain more about why “desistance” is a misconception in this post. The short version is that the statistics were produced between DSM versions. The DSM-IV’s diagnosis, Gender Identity Disorder, did not actually require any persistent desire to be another sex other than one’s own, a property we call gender dysphoria. In comparison the DSM-V’s Gender Dysphoria diagnosis does require a desire to be another sex other than one’s own, with an additional list of useful diagnostic criteria to help physicians evaluate. Since this persistent desire is the strongest predictor of whether or not a person will need a range of medical options in transitioning, it should be understood that those without this desire don’t suddenly “lose” it because they never actually had it. The “desistance” misconception compares apples to oranges, however. Three-quarters of Kenneth Zucker’s clients were “sub-threshold for gender dysphoria,” meaning three-quarters of his clients were unlikely to need transition options. Yet he has gone on to publicly state because most of his clients weren’t specifically gender dysphoric that we should approach all gender variant youth assuming they’re not gender dysphoric too.

Kenneth Zucker in summarizing his research states that roughly 70% of the children admitted to his clinic were “sub-threshold for gender dysphoria,” meaning they weren’t experiencing the embodied anxiety that motivates people to transition. Despite this, Zucker and his squadron of various proteges had, by inserting themselves into the gender identity work group for the DSM-4, successfully changed the definition of the then-called “gender identity disorder” to… not actually need gender dysphoria. Suddenly, Zucker could claim that all his patients were “transgender”–despite the fact that this was plainly not the case by his own admission elsewhere in his research–and then follow this up by saying that the same proportion of patients “ceased to be transgender” by the time they were adolescents.

Which, you know, is a bit like saying you’ve fixed the patient’s broken leg, even though they originally were admitted to the hospital for a fever?

Jesse Singal puts “myth” in scare-quotes as if this were still up for debate. Sorry, no one who actually understands the importance of isolating cause and effect thinks the desistance misconception is rooted in a solid interpretation of data. He has always been out of his depth when writing on trans topics, but editors will keep buying his ignorant bile because nothing sells quite like smearing “transgender activists.” Meanwhile I’ll be over here, hysterically dismantling his contrafactual twaddle for peanuts.

There’s an entire reddit dedicate to this » « ~elevator waiting music~