You can practically hear the mental acrobatics being performed by the management of Corona Tavern, one “Lorraine,” interviewed in a fantastic piece of journalism on Community TV about two incidents: one alleging the bar and its security staff harassed a trans woman patron, and another alleging the bar posted a transphobic sign regarding washroom use. The interview is only 5 minutes long, and I feel it is critical to witness first hand what it’s like trying to navigate through the tangled mess that is transphobia. If you consider yourself a trans ally, please check it out, either at the link above or again in the video below. Please try to truly comprehend what it’s like dealing with people who antagonize you without an ounce of rational thinking.

Corona Tavern is a bar in Medicine Hat, Alberta, that posted this lovely sign, which keen observers will know is a rather flagrant violation of Bill 7: 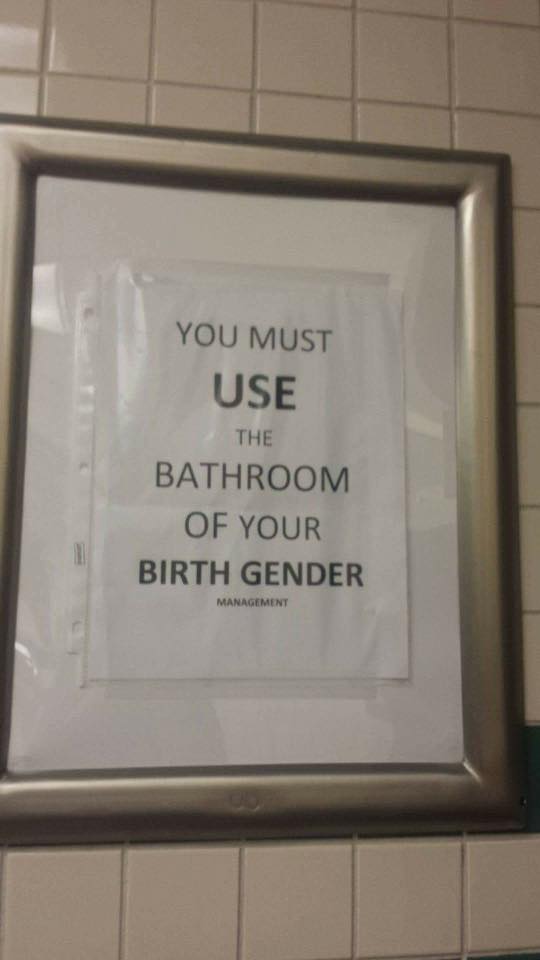 This sign was shared on social media shortly after the account of a trans woman who states in her interaction with Corona Tavern that management said “[the owner] would’ve thrown me out of the bar for using that bathroom.”

Yes, you read that right–not for harassing patrons, not for assaulting patrons–for peeing. In the toilet, mind. Peeing where you’re supposed to pee is against Da Rules now.

Corona Tavern has two parts to this:

Regarding point #2, let’s review this interview from Community TV, a conversation between a journalist and the management of Corona Tavern:

Lorraine begins by stating rather simply that “this is a houserule. That’s just the way it is here.” The ComTV interviewer then asks if they were any specific incidents that prompted the sign, and Lorraine responds by saying “transgender [sic] don’t want the spotlight.” The interviewer spends the better part of 3 minutes trying to get specifics out of Lorraine and she spends those 3 minutes vacillating wildly between “transgender [sic] don’t want the spotlight” and “this is the rule here.” The interview concludes when the interviewer asks Lorraine if it would be appropriate for the bar to bring back racially segregated washrooms, at which point Lorraine hangs up.

Yet Corona Tavern’s public statement from Lorraine contradicts her own interview, in which she states: (typos original)

Since the passing of Bill 7, we have had numerous complaints of Males [sic] going into the women’s washroom. The clientele that we serve are often under the influence of alcohol and some young men, who are not transgendered [sic] have been claiming to be, to enter the women’s washroom.. This has caused some young female patrons to feel unsafe and threatened.

The ComTV interviewer, whose conversation occurred mere hours before the release of this statement, specifically asked Lorraine if any complaints were received. She answered by rather bizarrely cissplaining that “trans people don’t want the spotlight”–which isn’t untrue in the sense that we’re really fucking tired of having to fight for the most basic human right of all, access to facilities. The bottom line being that the question was avoided, textbook psychological projection taking the place of an actual answer. Now, suddenly, there are “numerous” complaints that Lorraine can state without a moment’s hesitation? But she won’t tell us how many, when they occurred, whether they’re on record, whether the police were ever notified and whether criminal charges have ever been pressed.

Suppose for the sake of argument young cis men (“cis” being the term notably avoided here) were harassing patrons in the ladies’ room. How, exactly, does it follow that trans women should be barred from using the ladies’ room because of the poor behaviour of cis men? If the patrons at your bar feel threatened, how does it not follow that the appropriate reaction is to ban entry of the actual harasser(s)?

If we revisit point #1 of Corona Tavern’s problems, we get a glimpse of what’s actually going on.

The patron who was harassed by the establishment posted the following statement in a widely shared Facebook post (linked to Global TV so non-FB users can see):

Two weeks ago I was in Medicine Hat attending a local bar called The Corona and was asked several inappropriate questions about my transition by the staff and then was told if I used the women’s washroom I would be kicked out of the bar. They asked me if I was yet to have grs and I was told my presence would make the women feel uncomfortable. I told them I had not used a men’s washroom since I was 17 and I had no intention of starting. The majority of the staff and bar patrons were mortified by the opinions of this one manager so despite this person I went on with my night, not using any bathroom at all. Now nearly two weeks later I have been informed this sign has been up and I am disgusted they think this degrading and archaic behavior is acceptable or even legal. I don’t live there and I have no intention of ever setting foot in that establishment again but the local LGBTTQQIAAP community should not have to deal with this nonsense.

It’s not clear from news outlets or the patron’s own statement how the conversation even began. Regardless, between management’s statement that the patron would’ve been kicked out “just for entering the women’s washroom,” the security staff’s sexual harassment by interrogating the patron on her genitals, and most tellingly of all–the argument that the patron’s presence would make women feel uncomfortable–illuminate that the concern is not one of actuality but in one of perception of threat.

Once again, the mere act of existing is suddenly harassment. I cannot reiterate enough how common this trope is. Cathy Brennan (fake goth extraordinaire), the Pacific Justice Institute, Corona Tavern–the argument implied underneath these reactions is that the mere presence of trans women is threatening or harassing to cis women. Think the actual perpetrators of actual crimes are to be prosecuted? Not in the minds of transphobes. Existence is a crime now. Guilty by association. Inherently harassing. No amount of statistics about who is more likely to harm whom will sway their minds, harassment is a fundamental property of trans women, that’s “my conviction and I’m standing by it,” or so sayeth Lorraine.

To reiterate: Corona Tavern requires its trans women patrons to use the men’s room. In response to the public backlash, they made one washroom gender neutral.

Guess which one. (spoiler: there’s still a women’s washroom)

I have a question for Corona Tavern’s management: How, exactly, do you plan on enforcing your policy?