While grocery shopping, I always compare prices between similar products and read the labels. Especially the fine print. The smaller the letters, the more carefully I read some text. I expect sellers to lie and try to mislead me. Once you start to examine the ingredient list of every food you contemplate purchasing, you will notice a certain interesting trend, namely, people who make food want to rip you off. And I don’t like getting ripped off.

I assume most people must have noticed that there exist real products and various substitutes. For example, real ice cream is made from milk, various “frozen desserts” are made from vegetable oil. Alternatively, there exists real butter and various butter substitutes. Or you can get real chocolate or fake one that’s made from weird ingredients. Recently, I wrote about how these fake products are sometimes incorrectly labelled in an attempt to mislead the consumer. Today I will instead explain how such fake products can be more expensive that you might imagine.

You would expect the fake product to be cheaper than the real thing, right? 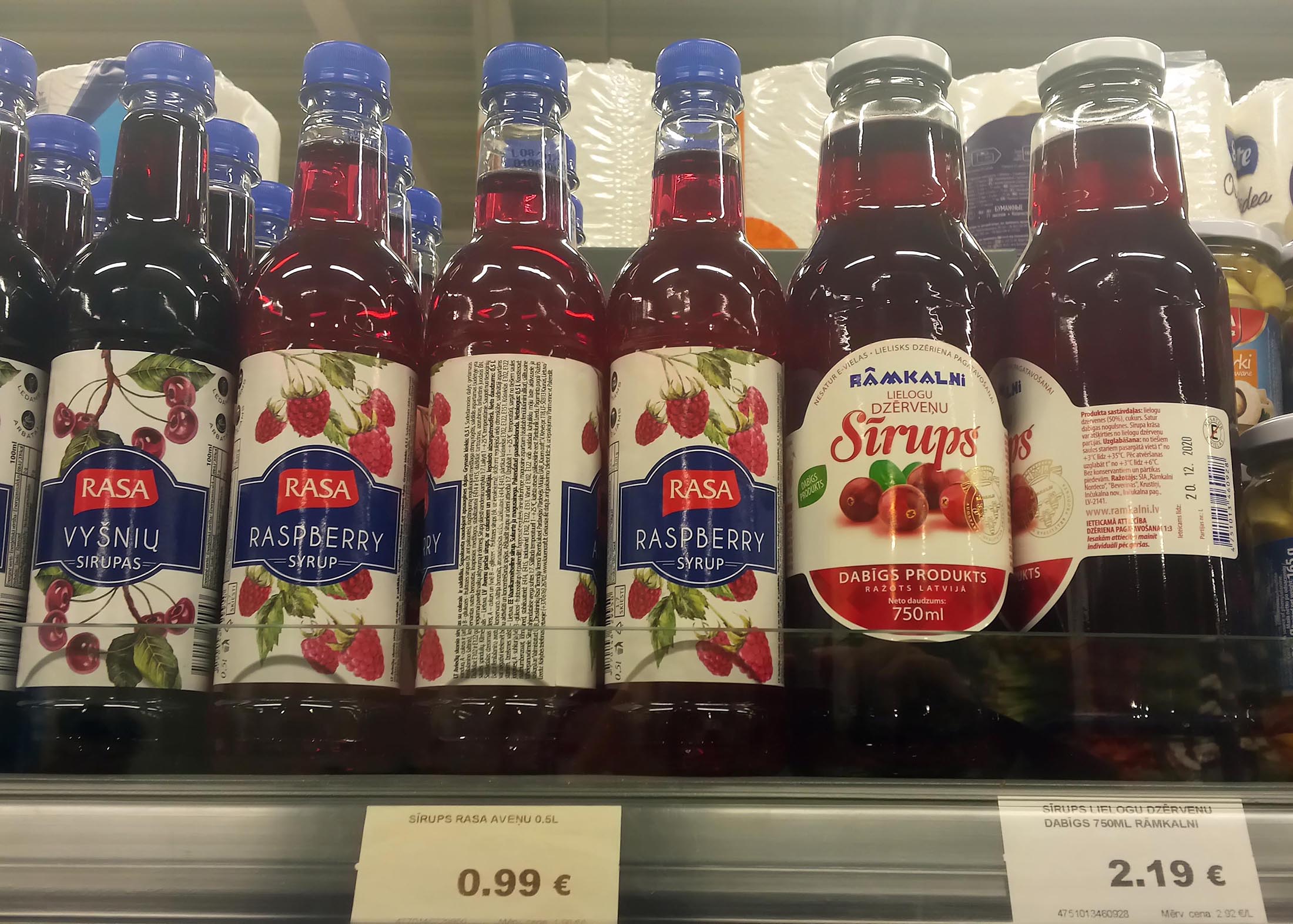 On the right side of this photo you can see some bottles of cranberry syrup. It is the real thing, the ingredient list contains only cranberries and sugar. A 750 milliliter bottle costs 2.19 euro. This means that real cranberry syrup can be purchased for 2.92 euro per liter at this shop.

On the left side of this photo you can see fake raspberry syrup and fake cherry syrup. Both of these products are incorrectly labelled. They should be called “raspberry taste syrup,” and “cherry taste syrup,” because those products contain no berries at all. The ingredient list for the fake cherry syrup contains the following: “Drinking water, sugar, glucose-fructose syrup, citric acid, aspartame, flavoring, sodium benzoate, food colorings: E150d, E102, E122, E151, stabilizers: E414, E415.” The fake berry syrup costs 0.99 euro for 500 milliliters, this means that fake syrup can be purchased for 1.98 euro per liter at this shop.

So far, the fake product really is cheaper than the one that is made from real berries. Personally, I would definitely prefer to pay a bit more for the real thing, but at least it is possible to argue that consumers are not blatantly ripped off when they buy the fake product, given how they at least get a better price. Thus, if the label wasn’t misleading and clearly stated that these products are “raspberry taste syrup” and “cherry taste syrup,” I wouldn’t have anything else to complain about.

People tend to expect to see the same trend all the time, they expect fake products to be cheaper than the real ones. Some food ingredients are expensive (like real berries). Other food ingredients are much cheaper (like water, sugar, and artificial flavors). Thus we imagine that of course a syrup made from real berries should cost more than a substitute product made from water, sugar, flavoring, and some food colorings. 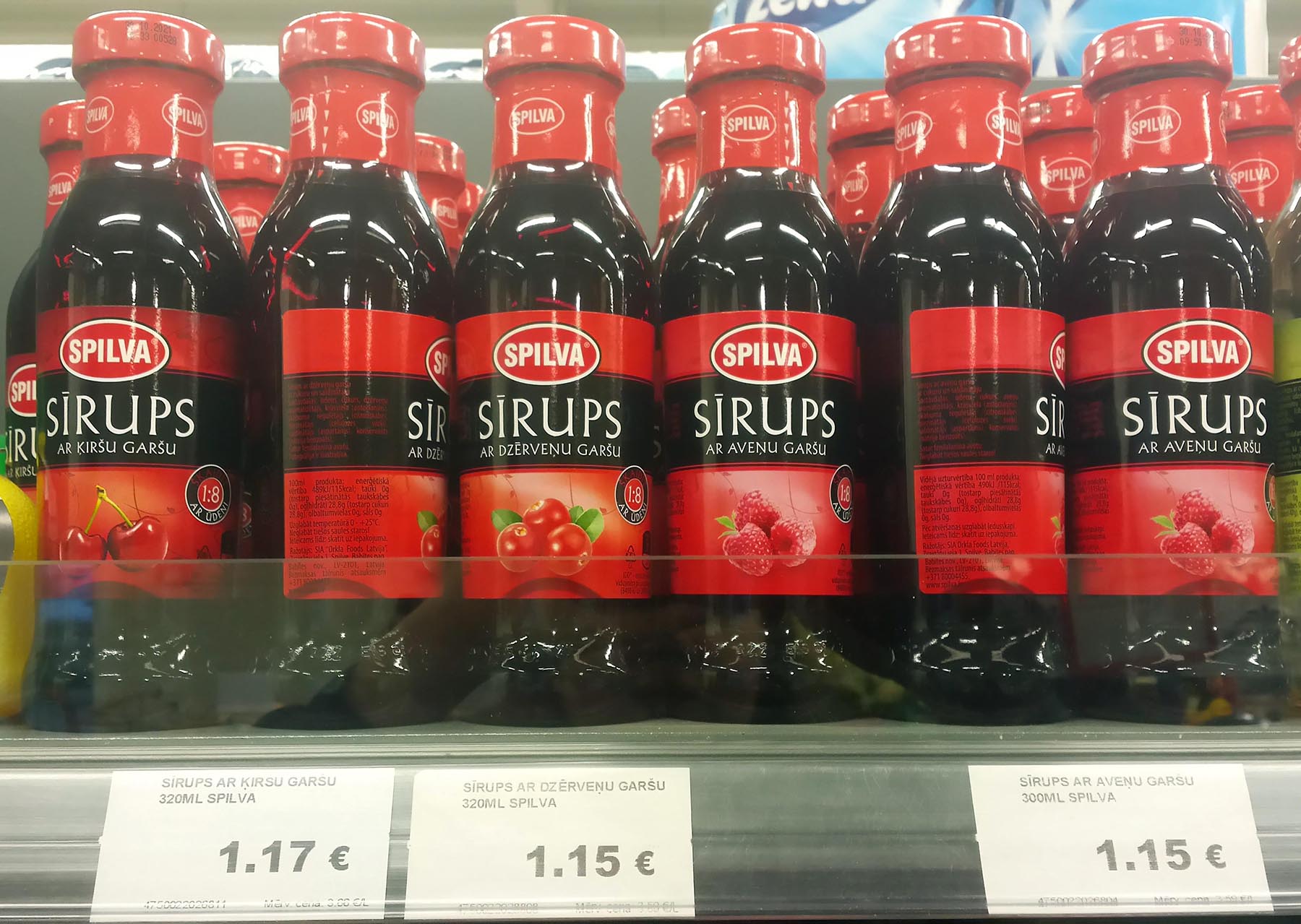 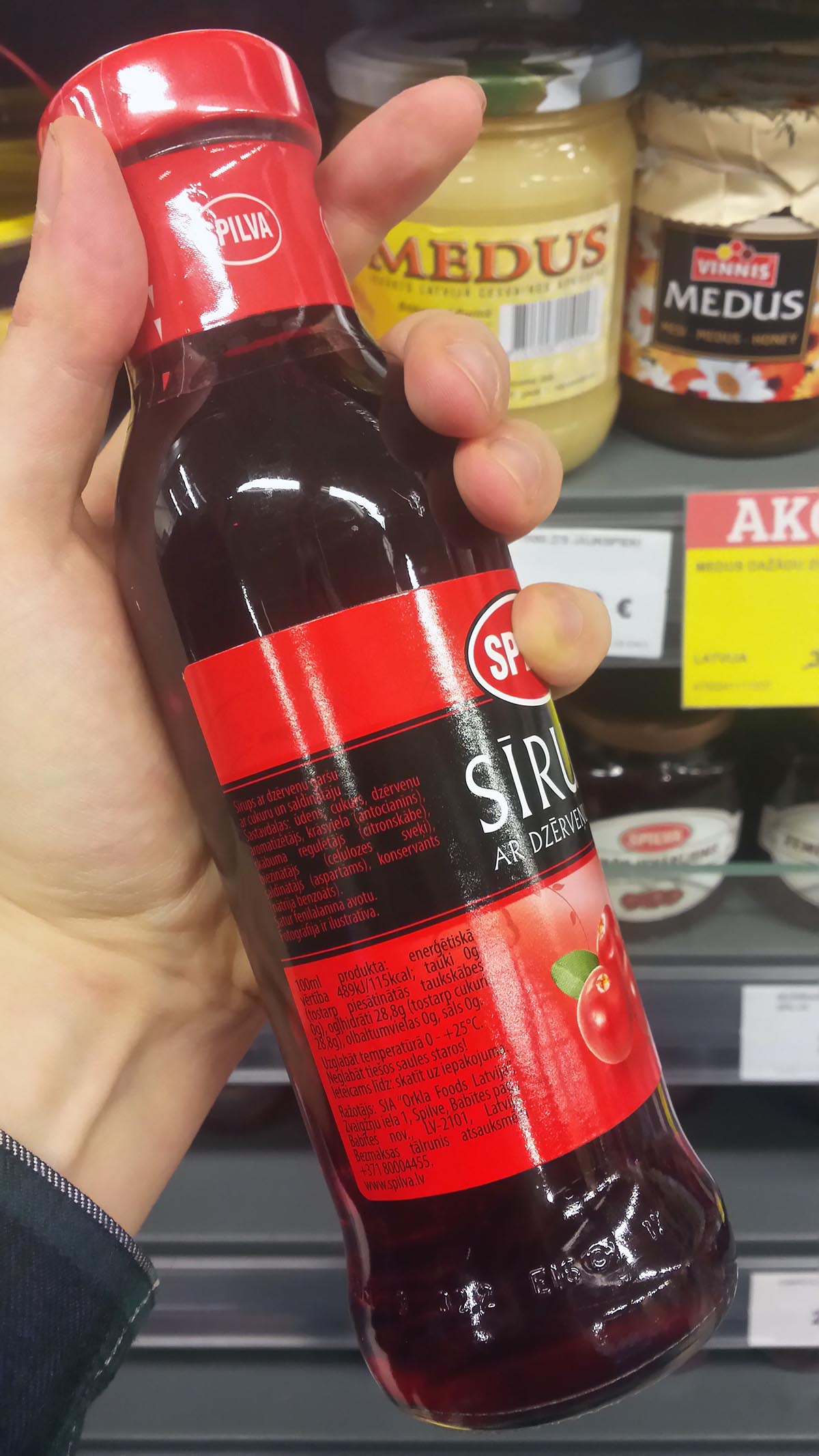 Here is a closeup of the ingredient list for the cranberry taste syrup. In contains: “Water, sugar, flavoring, food coloring (anthocyanin), citric acid, thickener (cellulose gum), aspartame, sodium benzoate.” There are no cranberries whatsoever in this product.

At this point I can only wonder why would any consumer want to purchase fake cranberry syrup when the real thing actually is cheaper. Do some consumers fail to pay attention, don’t bother to read ingredient lists, and are too lazy to compare prices?

Also, the company that manufactures this cranberry taste syrup must be making a fortune given how they have substituted a more expensive ingredient (real berries) for cheaper ingredients (water, sweetener, artificial flavoring and coloring). They are ripping off consumers by selling a poor quality product for an expensive price. This thing is just some overpriced snake oil. The fact that it is available for sale indicates that many consumers probably fail to notice how they are getting ripped off.

Personally, I try not to eat crappy food, but when I do so, I at least want my crappy food to be cheap.