Whenever I go grocery shopping, I always examine the packaging of any food I consider purchasing, and I specifically look for the information that is written in the fine print. I expect sellers to lie and to attempt to cheat me. Personally, I don’t care about counting calories (I am perfectly happy with my weight). Instead, I am looking at the ingredient lists. Once you start to examine the ingredient list of every food you contemplate purchasing, you will notice a certain interesting trend, namely, people who make food want to rip you off. 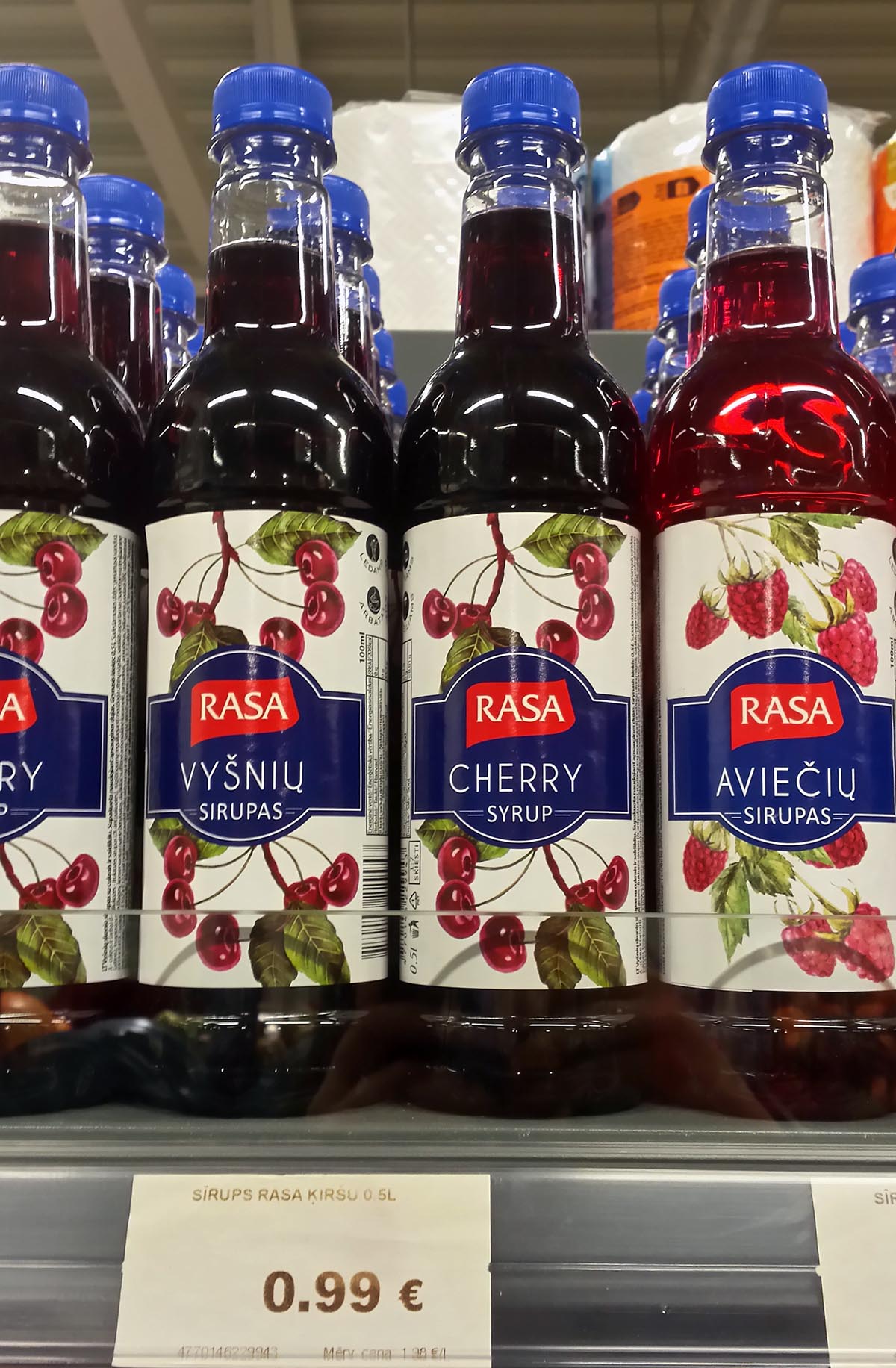 Cherry syrup in a grocery store.

Here is an example: A bottle of cherry syrup on a shelf in the grocery store. The label says “cherry syrup,” so you probably imagine that it is made from cherries, right? Let’s take a look at the ingredient list. Unfortunately, this time the ingredient list is provided only in Estonian, Lithuanian, and Latvian (no English), so you have no choice but to trust my translation. (Unless, of course, you speak one of these languages, in which case: Cool! Greetings to another fellow polyglot!) 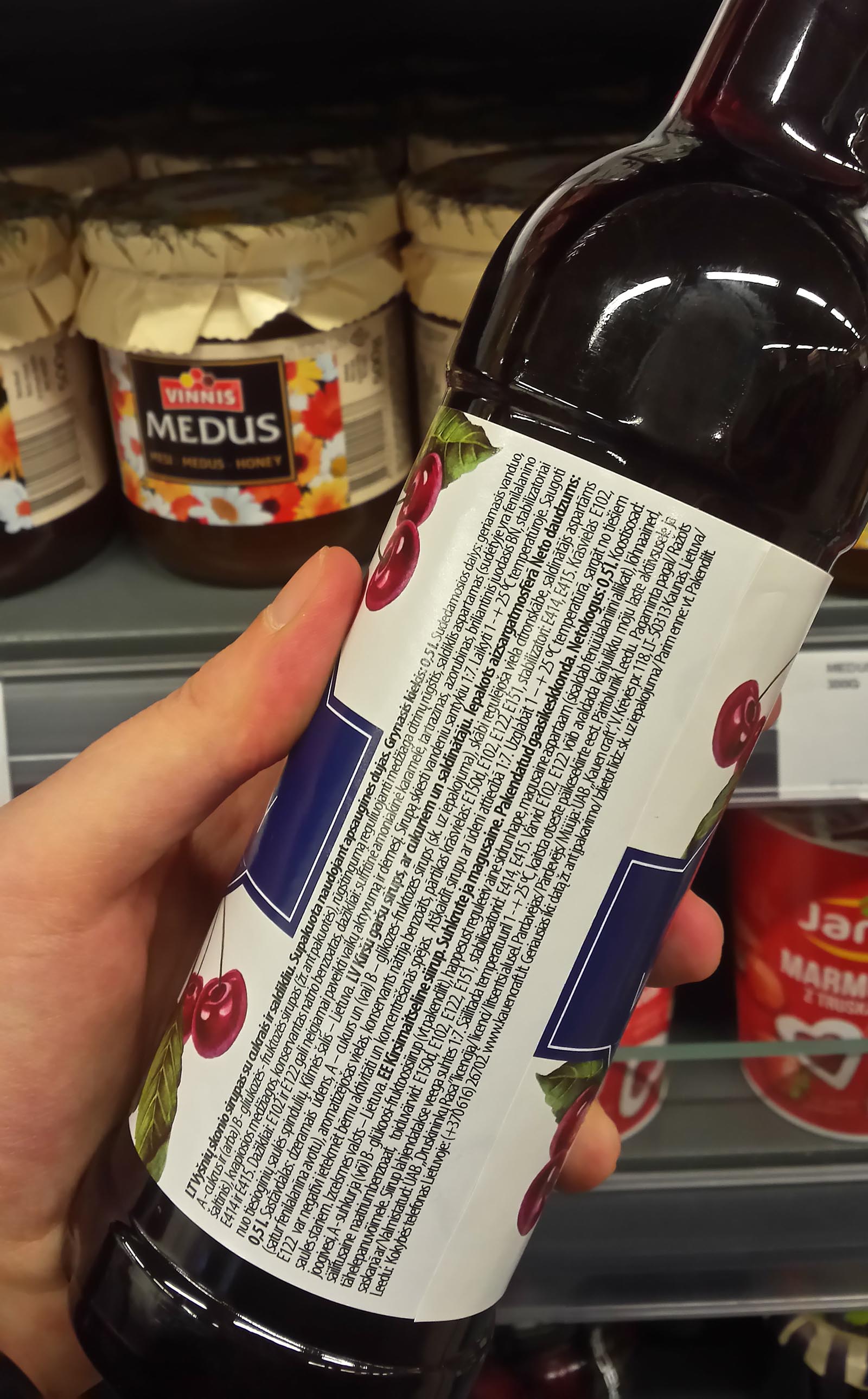 In the fine print, this product is called “cherry taste syrup.” Ingredients are: “Drinking water, sugar, glucose-fructose syrup, citric acid, aspartame, flavoring, sodium benzoate, food colorings: E150d, E102, E122, E151, stabilizers: E414, E415.” Here is a crop of the fine print, so that you can more easily check it for yourself.

Looking at the ingredient list, you will notice something interesting: THERE ARE NO CHERRIES. Usually people who try to rip me off will add 1% of cherries to the food. This time, they didn’t even bother with adding a trace amount of cherries.

This ought to be illegal. This is a fraudulent attempt to mislead the consumer. Most shoppers aren’t as pedantic as I am, they just grab some product from the shelf and buy it without even bothering to check the fine print.

Why does this matter? Some food ingredients are expensive (like real cherries). Other food ingredients are much cheaper (like water, sugar, and artificial flavors). The consumer is incorrectly imagining that they are purchasing a quality product made from expensive ingredients. Instead they get a product where better ingredients are substituted with cheap crap. Thus the manufacturer can profit by pocketing the difference.

This time you will notice that the fake cherry syrup costs only 0.99 euro for half a liter. That’s actually pretty cheap. Real cherry syrup would be more expensive. But you cannot even imagine on how many occasions I have spotted fake products being sold for almost the same price as the real ones. That’s a rip off.

Moreover, due to the incorrect labeling (both fake and real cherry syrup can be labeled as “cherry syrup”; producers of the fake product aren’t legally obliged to call it “cherry taste syrup” or something similar instead), it becomes really hard for businesses who make genuine products to compete against all the fraudsters. Thus everybody is motivated to substitute quality ingredients for the cheap crap in order to stay in the business.

Nowadays, this race to the bottom has come to the point where most of the desserts are just palm oil with sugar in it. Just add appropriate artificial flavors, food colorings, preservatives, stabilizers, thickeners, etc., and the crappy product is ready for sale.

I love ice cream. It’s my favorite dessert. For a few years, before the 2008 economic crisis, I couldn’t find any ice cream in Latvian grocery stores that I could eat. Every single one of them was made from vegetable oil instead of milk. Personally, I refuse to pay money for such crap on principle. It was only after the economic crisis that some manufacturers realized how there is a market for “luxury ice-cream” that was, gasp, actually made from milk and real cream. Nowadays, I know three different Latvian ice cream manufacturers who produce edible ice cream. (Of course, the number of manufacturers, who make their ice cream from vegetable oil, is larger.) Anyway, during the 2008 crisis, some brands realized that they cannot compete in the race for the cheapest product, so they decided to return back to making products that are actually edible.

Another example—wafers and biscuits. I used to eat wafers in the past, back when the recipes were at least decent. About two years ago, the only Latvian company that was still making edible wafers changed their recipe. I haven’t been able to eat any wafers for a few years already. I checked the ingredient lists of various wafers I saw in grocery stores, and I disliked everything I saw there. I was forced to give up cookies/biscuits years ago. I used to eat cookies back when I was still a child. Nowadays, their ingredient lists are just awful.

Some of you might be thinking that my complaints are unjustified, after all, palm oil is edible. Maybe you even feel that palm oil desserts are tasty. The problem is that I can tell the difference. An ice cream that is made from milk and cream tastes differently than one made from vegetable oils.

Alternatively, let’s consider desserts made from fruits and berries. I love eating fresh bananas. I also really love all the desserts my mother makes from bananas. But I absolutely hate the artificial banana flavoring. It smells nothing like real bananas. The so called banana flavoring smells like cheap bubble gum, it’s one of the most disgusting scents in existence. Two years ago, I once bought dehydrated banana chips. Upon opening the package, I immediately noticed the disgusting stench of artificial banana flavoring. I checked the ingredient list on the package. It stated: bananas, preservative, flavoring. On that day I realized that I cannot even buy dried fruit without first checking the ingredient list on the package. Why? Just why? Why did the manufacturer had to ruin perfectly good bananas by adding this abominable flavoring to them? Nowadays, some people feel that real bananas no longer smell like bananas. Thus they add an artificial flavoring to the real product in order to change its smell to how some people imagine a dehydrated banana ought to smell.

Artificial banana flavoring is one I absolutely loathe. In my opinion, the rest of fruit/berry flavorings aren’t as abominable, but I can still tell the difference between a fake fruit smell versus the real one. I can tell whether a strawberry cake was made with real strawberries or whether it has the artificial flavoring instead. The smell of real fruits and berries is usually very subtle. All the artificial flavors are very strong in comparison. I assume that it would be possible to add a smaller amount of artificial flavor so that I would no longer notice the unusually strong scent (compared to natural products), but somehow no food manufacturers want to do this. Personally, I strongly prefer the much subtler scents of real fruit and berries. The overwhelmingly powerful flavorings feel fake to me.

To conclude: consumers are getting ripped off on a daily basis. The only solution would be for each one of us (or at least many of us) to start to painstakingly read and decipher all the fine print on food packaging. Until that happens, food corporations will keep on producing junk with the expectation that consumers do not care and cannot tell the difference. Personally, I also try to get my food from the farmers’ market whenever possible. There I can find tasty handmade food that’s created with normal ingredient lists, like, you know, a cherry syrup that contains only cherries and sugar (I do want my cherry syrup to be made from real cherries).