However cynical we may be about government, it’s hard to match the cynicism inside government. But, when I think about history, I remind myself that the really enthusiastic governments were also the most dangerous. When I started doing stuff at the White House it was exciting and glamorous for a little while.

One topic that brewed up on the national scene, early in the Clinton administration, was that there was a huge number of people employed by the White House. The actual number was something staggering; everyone had a posse and important people’s posse-members had posses of their own. It was posses all the way down.

The news was that there were too many White House employees so one day I went down and half of the people were now wearing NASA, Department of Agriculture, and other agency badges instead of White House badges. Problem solved! Since I was working for TIS, on behalf of DARPA, I always had a visitor badge and had to be separately cleared into the building.

There was another problem, that there were too many non-cleared people with White House access; everyone was supposed to be cleared through a background check – presumably to make sure there were no Russian spies, or something. The idea that spies could be kept out of such a permeable perimeter was absolutely absurd; there were people everywhere and meetings so big and vague that a Russian spy could have probably dropped in and died of boredom. I do not know where the interesting business of government happens, but it doesn’t seem to happen in the government, per se. Someone, probably ${nameless jackass} put me on the list of people who need to get a clearance.

My memory is probably exaggerating but I remember being given about 25 pages of stuff to fill out. It included a bunch of things, like: every job I had ever held and dire warnings about what could happen to me if I answered any question inexactly. Some of the questions were stupid – such as whether or not I had ever advocated the overthrow of the government. This was early days – now I’d have been able to answer that question with a flat “yes.” I got to the one where it asked me to list any contacts I had with foreign powers and suddenly I was thinking how I looked – many trips to Europe, academic family, dated the daughter of a communist labor activist and hung out with her union organizer mother, grew up around Columbia University student radicals; my baby-sitter may have been a member of the Weather Underground, etc. What was any self-respecting anarchist doing, here, anyway?

I looked up at the Secret Service agent who had given me the questionnaire and asked, “how many other ‘firewall experts’ do you think the White House has in its rolodex?” He chuckled, “probably not very many.” I handed him back the stack of paperwork and said, “I’d be perfectly happy if you guys revoke my access,” and left. 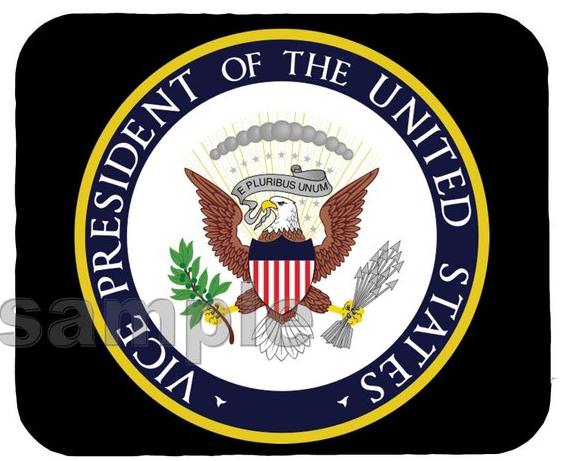 This is from some seller on etsy. The real thing had a bright blue background and was made of high-impact plastic with a rubber backing.

Security in the building was remarkably lax (a typical perimeter security set-up) once you were in the door you could wander around all you wanted. One night I was there late and wandered the upper floor of the Old Executive Office Building and found myself passing the office of the Vice President – empty. Naturally, I looked inside. I stole the mouse pad off of Al Gore’s desk as a memento; it was nice blue plastic with a Vice Presidential logo. Since my systems at home were mostly Sun workstations, the mouse pad lived in my random stuff drawer until I switched to windows around 1997, at which point I used the mouse pad until a friend of my then-spouse noticed it and said “it would be funny if that were real.” The joke was on them and, since it wasn’t a very good mouse pad, I gave it to them. If it’s still in existence, Al Gore’s custom mouse pad is being used by an old stoner hippie in Harper, TX. Since there are a lot of stoner hippies in Harper, TX, I don’t think I have pinpointed its location.

At one point I was asked if I wanted a photo-op with anyone, or anything like that, and I asked if they did photo-ops with Socks the Cat. There, the joke was on me: the next day I was given a fairly nice reproduction of a photo of the First Feline. It turned out that the official White House Photographer had gotten a lot of requests for photo-ops with the cat, so they had an official photo to give to nice kids or annoying people like me. I may still have the picture of Socks in my Memory Drawer at home; I will check and see if I can find it.

I Wonder Who » « Argument Clinic: Pass Me a Clip of Steel-Core Invective