Let it never be said that sensitivity and the need for safe spaces is in any way monopolized by minorities or liberals. As it turns out, all you need to do to ‘offend’ a certain brand of Canadian Nationalists is add some colour to a piece of fucking fabric: 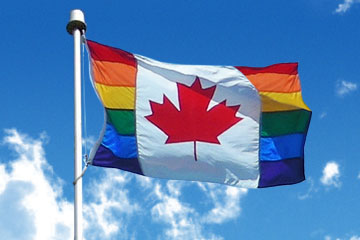 I got a rape threat on my Facebook for sharing this. Facebook says said threat “isn’t a community standards violation.”

According to internet trash basket Life Site News, this ‘distortion’ of the Canadian flag ‘disturbed’ the head of the Christian Heritage Party.

Prime Minister Justin Trudeau appeared at the Toronto Gay Pride Parade waving a Canadian flag with the vertical red bars replaced by the rainbow stripes of the LGBTQ movement.

“It’s disturbing to see the flag put to such a use,” Rod Taylor, head of the Christian Heritage Party, told LifeSiteNews. “He is showing disrespect for all the Canadians who disagree with him on the gay agenda. He is basically saying, ‘This is the new Canada, so get used to it.’”

Yes, Rod Taylor, that is the message. You can’t institutionalize second class status for (cis) queer citizens. Boo hoo. I’d drink your tears but I think my doctor would advise against it–that much salt is bad for my health.

Life Site News goes on to correctly point out:

Another site, Findlaw.ca, goes further, stating “the Canadian flag may be a symbol of pride, unity, honour, and sacrifice, but it’s not against the law to disrespect, deface, and destroy it.” In fact, “there are no laws against desecration, such as burning, shredding, stomping, or spitting on it. However objectionable, such acts are protected forms of expression under the Charter of Rights and Freedoms.”

Yes, this is the part that reactionaries always forget about their so-called freeze peach: Actual freedom of speech protects citizens criticizing the state, and that criticism can include ‘defacing’ the flag, if we were even to accept that this qualifies as defacing. But perhaps nationalists are too busy arbitrarily drawing lines on “true” Canadians to remember that. They’ll romantically say shit like “people died for that flag!” and then promptly ignore the part where the war the soldier died in was ostensibly to protect our freedoms.