We’re going to compare two decals side by side, both depicting cartoon violence, both associated with social movements. Let’s see if you can spot the difference: 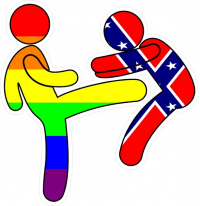 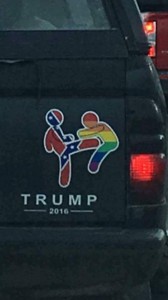 Often one of the ways social advocacy is derailed is through the accusation that minority groups “hate” the majority. This viewpoint conveniently soothes the cognitive dissonance associated with witnessing–and then tolerating–crushing oppression. It’s easy to write off the presence of ghettos, disproportionate police brutality & arrests & convictions, HIV epidemics, employment discrimination, and housing discrimination when you understand the minority’s efforts to liberate themselves from this to be inherently threatening. Now you can accept all those injustices through the lens of self defence. “They deserve to live in a ghetto, because otherwise they’ll come get me,” or so the logic goes. It is often paired with the Just World Fallacy, in which their material security is written off as also being just, because obviously they deserve the world to be handed to them on a silver platter.

It’s all very convenient for maintaining the status quo. And when the status quo positions you on top, you have even fewer incentives to really question it. There are people who genuinely believe this–look no further than the alt-right’s response to every article about anti-Queer discrimination in the West: “Well they’d hang you in Iran so stop complaining!”

As in, we think you have cooties, it’s no longer legal for us to murder you, so be “happy” with widespread economic and social discrimination because it is in fact “better” than you “deserve.”

So, do I actually hate y’all?

When I try to name my emotional response any time I return to “the mainstream,” those are the two words that come to mind.

While I’m good friends with most of the couples that married this year, they know that these events are multi-faceted barbs that sting for me: My parents can and have supported me financially, but only on considerably smaller scales, my extended family would shun my wedding if I were to marry another woman, and even if I did manage to scrounge together enough for a modest wedding I would not be able to follow a lot of wedding traditions because they involve exploring the past. You know, the part before I transitioned? It would be gravely insulting to endure that. Even having a wedding would still require me to trust my guests to honour my request to talk about the future and not the past, or to respect my gender identity more generally, and I don’t trust my extended family at all. I suspect it would be a protracted evening of wondering “who the fuck is Joe*?”

I didn’t finish university because of combination of factors–the biggest being my untreated gender dysphoria wreaking havoc on my mental health. Now that I’ve regained clarity over my mental facilities, I’ve been mulling over returning to university, and now have to deal with the economic realities thereof. Tuition may be cheaper in Canada but it’s certainly not “cheap.” My parents are just wealthy enough that the banks will permit me to dig myself into a giant debt hole to send me to university, which isn’t quite paying for my education but does at least mean I have more options than someone with worse credit.

One of the women that recently married went to Oxford on her parent’s dime, something my family couldn’t possibly support. That stings. It’s envy. I would sacrifice really cute animals to get the money to pay for some of these post-secondary programs that I cannot afford, and likely won’t afford for another decade if I’m lucky.

They’re spending $15,000 or more on a really big party and I have to sit here and calculate just how many pennies pinched will make my return to college feasible.

I’m not saying my life would be “easy” had I all the advantages I’ve just described, just easier. But there are a lot of opportunities I’ve had to watch float by because I could not afford them or because they posed hazards to me due to my identities, opportunities that they could (and have) taken because mum & dad will pay for it while they try to compete in our fucked up, post-boomer economy; or because cisgender and heterosexual identities are punished nowhere in the globe.

So do I hate them? No. I resent the fact that they’ve had more opportunities than me, despite our comparable work ethic and academic performance. I envy their privileges, how they didn’t have to meticulously calculate for homo-antagonism to plan their wedding, or wonder how their additional polyamory partners will fit into a marriage system that only recognizes monogamy. How they don’t have to research their vacation destination to make sure their existence is not a crime. How they can afford vacations to begin with. How they are merely subject to the more generalized danger of being alive, instead of having that danger compounded by being queer and trans in a world that fucking hates queer and trans folk. How, if they are arrested, they don’t have to fear being detained with members of a different gender. How, if they are arrested, they can be reasonably confident they’ll survive the encounter. How they can’t be fired at a job for being who they are. How there are social supports for them who will not put them through the wringer because they’re marginalized.

All this is to set up the basic observation that as a demographic, QUILTBAG people are disempowered and disenfranchised. And unlike prejudice, which by its very nature is informed by ignorance and can potentially change, QUILTBAG people don’t stop being QUILTBAG at any point, despite the best efforts of various homo- and trans-antagonistic lobbies.

This is the part that’s denied by cishetero white supremacists–the alt right. QUILTBAG people are already being brutalized, as a demographic, more so if they’re also black, but there aren’t any organized hit squads run by the QUILTBAG community to lynch cishetero white people. Meanwhile we’re learning that the KKK is resurging, that cops and prominent politicians are members, that the bathroom police are literally a thing, and that many of these groups–especially in the United States–are armed to the fucking teeth.

It’s a pretty glaring false equivalency. One group is angry, armed and dangerous, and wants to micromanage other people (small guvment my ass). The other wants to be left alone. When the rainbow person in the above decal kicks the Confederate flag, that represents angry letters to the editor, protests where participants wave a flag, the “die cis scum” slogans that never actually precipitate in actual crime and more represent the resentment and envy I described earlier. Essentially, the cartoon violence depicted is self-defence in the broader context of assault on our community by trans- and homo-antagonistic people & lobbyists.

When the Confederate flag kicks the rainbow, that represents the epidemic of murder affecting trans women of colour, the lost jobs and lost homes, the forced prostitution and drug use, the aggressive and abusive Christian proselytizing, the gasoline and matches. They want to melodramatically call these acts of violence “defending” their nation or protecting the purity of Christianity or many other myriad excuses they can come up with. Essentially, they noticed that recognizing the state of violence against minorities is one of the strategies used to win people over, so they co-opt the language of actual, literal, assault to phrase equality as a existential threat of violence.

In other words, they’ve been taking up two seats on the train for their entire life and now they’re throwing a prolonged hissy fit because they’ve been told to occupy one and only one seat, like everyone else.

This isn’t a symmetrical issue, where both sides are at fault. One side is murdering people. One side just wants to exist on the same terms as everyone else.

These demands can’t coexist. The symbols representing them ought to be kicking each other. But let’s not pretend there’s a robed hit squad of gays running around hanging straight people from trees here. One represents a threat in the abstract, or in a way that could be easily minimized–the same way one recognizes a growling chihuahua to be issuing “threats,” if not serious or dangerous ones. One represents violence that is already happening. It’s the difference between being interrupted by a tiny dog, and being held up by an armed home invader. It’s the difference between a death threat from a masked, armed man; and a four year-old.

And all this is only true if we accept this misconception that I “hate” you. What consequence could there be if I had an anti-cis prejudice as severe as many people have an anti-trans one? I’m not an employer, so I couldn’t deny you a job. I’m not a supervisor, so I couldn’t sabotage your performance review. I’m not a gatekeeper to social services, so I couldn’t deny you access to the safety net. I’m not armed, so I have no way to hurt you except my hands (I’m also five feet tall and a 100 pounds). I’m not a doctor, so I can’t have you involuntarily institutionalized. I’m not an emergency responder, so I can’t neglect your emergency. I’m not a lawyer, so I can’t railroad you through court. I’m not a cop, so I can’t arrest you, beat you, rape you, or shoot you with impunity. I’m not a judge, so I can’t maximize your prison sentence because I perceive you as dangerous. I am perceived as deviant and therefore dangerous, meaning if I do get caught up in the justice system, I am more likely to be prosecuted and more likely to receive maximum sentencing.

I’m outnumbered, so it would be quite difficult for me to organize group violence. I’m not a banker, so I can’t deny you a mortgage. I’m not religious, so I have no holy book to hide behind to excuse this theoretical prejudice, nor any conveniently obedient congregations to incense with my prejudice. I’m not represented in Legislature or Parliament, so I can’t suggest or start or pass laws to discriminate against you. I’m not security, so I can’t legally harass you in a washroom. I’m not a scientist, so I can’t ram you through biased experiments and publish prejudiced diatribes in an attempt to legitimize discrimination. I’m not a teacher, so I can’t grade you unfairly or torpedo your educational opportunities. I’m not a media pundit, so I can’t make a living spewing lies at a camera lens for a six-figure salary.

And even if I were any of those things, discrimination against you is already illegal, so exercising my theoretical anti-cis prejudice puts me in the sights of the justice system, which brings us to what happens to trans people in said justice system.

Really, all I am is a blogger, and if I did have this anti-cis prejudice, the only risk I pose to you is that I might ban you from the comments section. WooooOOOOOoooo *spooky fingers*

All that is to say that even if I did hate cishet people, the question I ask in response is: So fucking what?

(For the record, I don’t accept the accusation to begin with, but even if I did, what would it matter? Seriously.)

*Not my previous name.