In case y’all ever wonder why I hate this Province, I present a reminder: a picture of a target made in the likeness of the Albertan Premier, Rachel Notley, was posted by the organizer of an oilmen’s golf tournament yesterday afternoon:

An organizer of a golf tournament says he’s not sorry for putting up a target displaying a photo of Premier Rachel Notley’s face on a golf course.

Ernest Bothi, president of the Brooks Big Country Oilmen’s Association, said the sign was displayed at a tournament held Friday at the Brooks Golf Club.

He said the photo of Notley was placed intentionally and was meant to be a target. Although he said no one actually hit the display, Bothi defended his right to have it there.

Oh Dog, not another one. Get yer bingo cards!

“I’m the president of the organization. I take full responsibility for it. And I did it because I see a lot of frustrated people out there,” Bothi said.

“The picture was just a headshot. It wasn’t anything of a lewd nature. We just went out, everybody played 18 holes. That was it.”

Bothi said that the group members of the Brooks Big Country Oilmen’s Association playing in the tournament are “fed up” with people being out of work and the increased cost of living.

“This has nothing to do with a physical attack. We didn’t burn her in effigy or anything like that. We just wanted to release some steam,” Bothi said. “It’s just, enough’s enough.”

Important observation: Bothi has exactly zero pending criminal charges laid against him. He is free to be a fucking asshat, just as we are free to call him one. Seriously, stop misusing the term freedom of fuck mothering speech.

Implying violent acts through the use of an identifiable target is pretty much always tasteless. Doubly tasteless right now, considering a British MP was recently assassinated for her policy. Triply tasteless, because violence against women is still epidemic in the West. I’m not sure what part of “haha, I blow off steam by fantasizing about violence against you” is funny.

Derek Fildebrandt, the Wildrose MLA who apologized for  endorsing a transphobic & homophobic comment without reading it, responds: 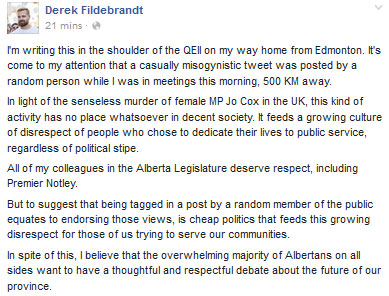 Didn’t he say he was hiring someone else to do his social media? Fildebrandt has at no point been either thoughtful or respectful. No “Mr.” Notley this time. Must be the new PA. Poor creature.

Elsewhere in the Wildrose Party, constituents have called for a leadership review of Brian “gong show after gong show” Jean (emphasis mine):

The constituency association in Lac La Biche-St. Paul-Two Hills passed a resolution Tuesday night calling for a leadership review at the party’s AGM in October.

“But recent events probably prompted some action on behalf of some of the members,” he added.

“In the [Derek] Fildebrandt case, the fact that a suspension took place then, within three days, reinstatement. It just doesn’t appear good in the eyes of many people.”

“I supported Brian from the very first day he announced he would run for the Wildrose leadership. You know, that’s why we’re here, as a strong opposition, working together united to hold the NDP’s feet to the fire.”

If by “hold the NDP’s feet to the fire” you mean “ceaselessly braying about taxes,” sure. No shadow budget, and no evidence based criticism has once come out of the Wildrose Party. But they have flip-flopped on nearly every issue you can think of. I’m not entirely sure what the hell their policy is anymore.

In a statement Thursday afternoon, Jean said he feels he has the support of most party members.

“I’m not surprised there are some members who are uncomfortable with setting a bold new vision for Wildrose,” he said.

“But I have travelled every corner of Alberta and am confident the vast majority of members and conservatives across the province want to see Wildrose broaden our tent and consolidate conservatives heading into the next election.”

I’m sure the Conservative Party is thinking the same thing, Jean. What’s your bold new vision? Making your MLAs be less obvious about their bigotry? (Protip: We can still hear those dogwhistles).

If these fucking clowns could never hold another seat, that’d be great.