I periodically browse websites about interior design, because I consider beautiful interior an art form, and I am interested in all kinds of art. One of the buzzwords I routinely notice in American websites that discuss interior is “decluttering”—the art of getting rid of superfluous and unnecessary stuff. Decluttering seems to be trendy among Americans right now; Googling for “how to declutter your home” gives you a lot of results for various online guides. There are websites devoted to teaching people how to throw away and organize their stuff. Numerous people have made careers by consulting clients who feel like they need help with decluttering. The basic premise is reasonable—if your home is full with stuff you don’t even use, it creates a mess and makes it harder to find the stuff you do need. However, whenever I spot yet another online article offering tips on how to declutter your living space, I cannot help but wonder how humanity even got to the point where such advice on decluttering is necessary at all.

Years ago, the first time I started browsing American interior design websites, I experienced some culture shock. And, no, I wasn’t envious of the American way of life; instead I was horrified and wondered what is wrong with these people. American living spaces are ridiculously huge. 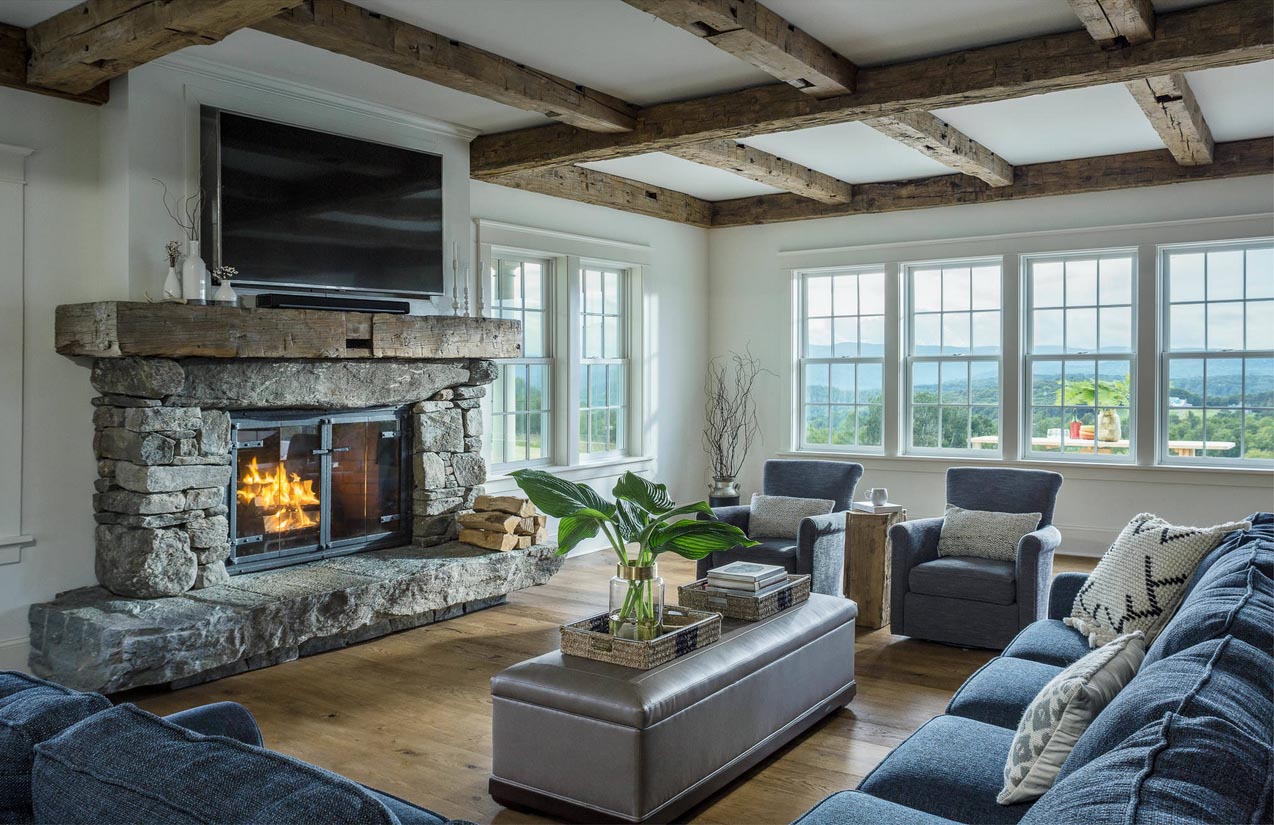 A living room, photo from houzz.com.

Here is a random photo from an American website about interior design. The first thing that catches my eye is how huge this space is. Basically, this is an oversized living room with a couch and a few chairs with lots of empty space around them. Why do people need this? Why do they even want it? Just think about the heating and air conditioning bills, never mind that all this space must be regularly cleaned and maintained. You don’t need this much space in order to accommodate a couch and a few chairs. I imagine that probably only wealthier Americans actually live in places like this one, but it still appears to be presented as aspirational. Yet personally I would never even desire such an oversized living room.

Or consider kitchen islands. They are practically unheard of in Latvia, because here kitchens are too small to have space for a kitchen island. 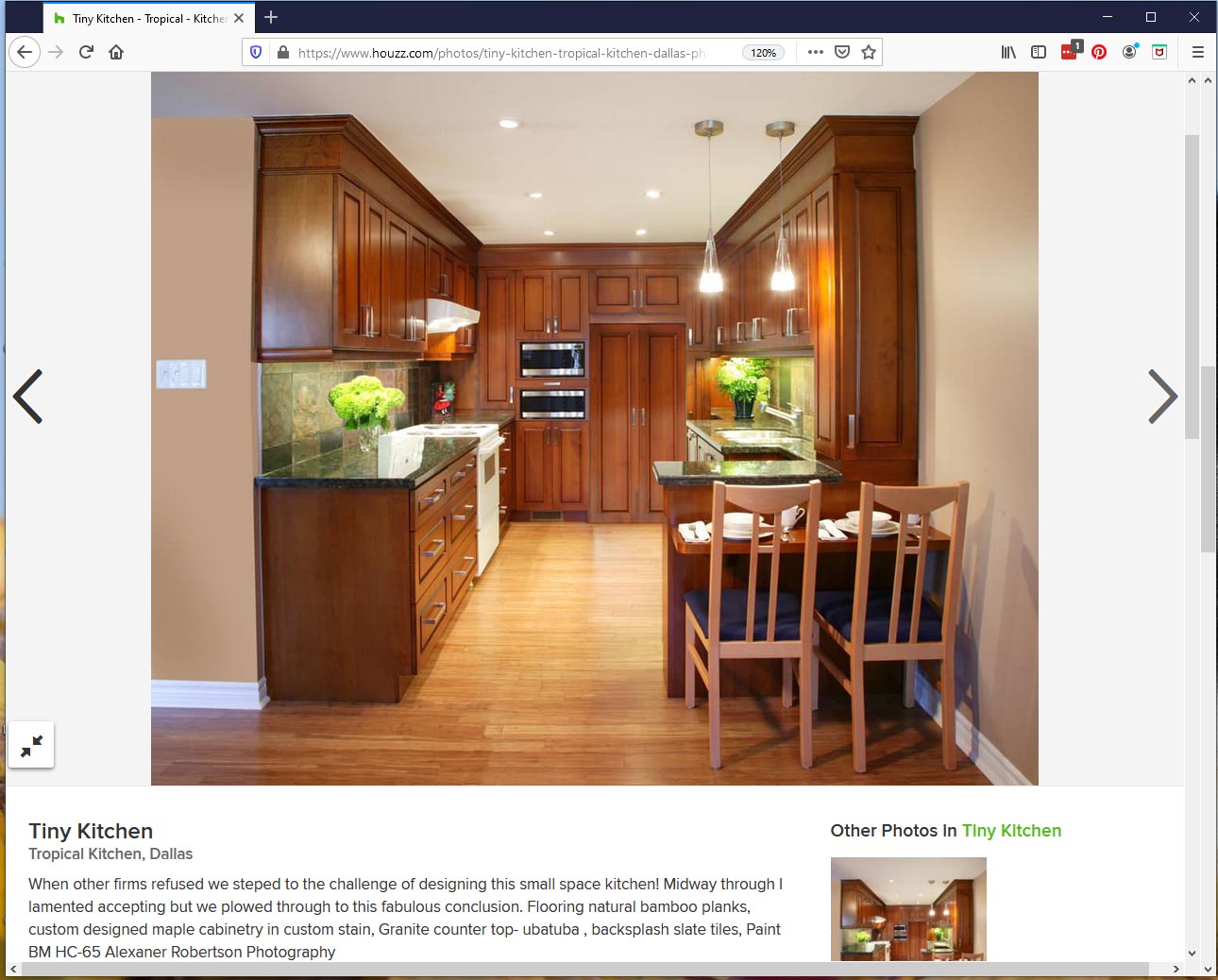 In my opinion, this kitchen is pretty large, it appears to be a little larger than my current one. Thought it is hard to say, maybe they are the same size. Yet in an American interior design website this kitchen is labeled as “tiny.” People who labeled this kitchen as “tiny” have a skewed sense of size. I have lived in an apartment where the kitchen was less than 1/3rd this size, and for me its size felt just fine, I didn’t really feel like I lacked space while cooking in that kitchen. 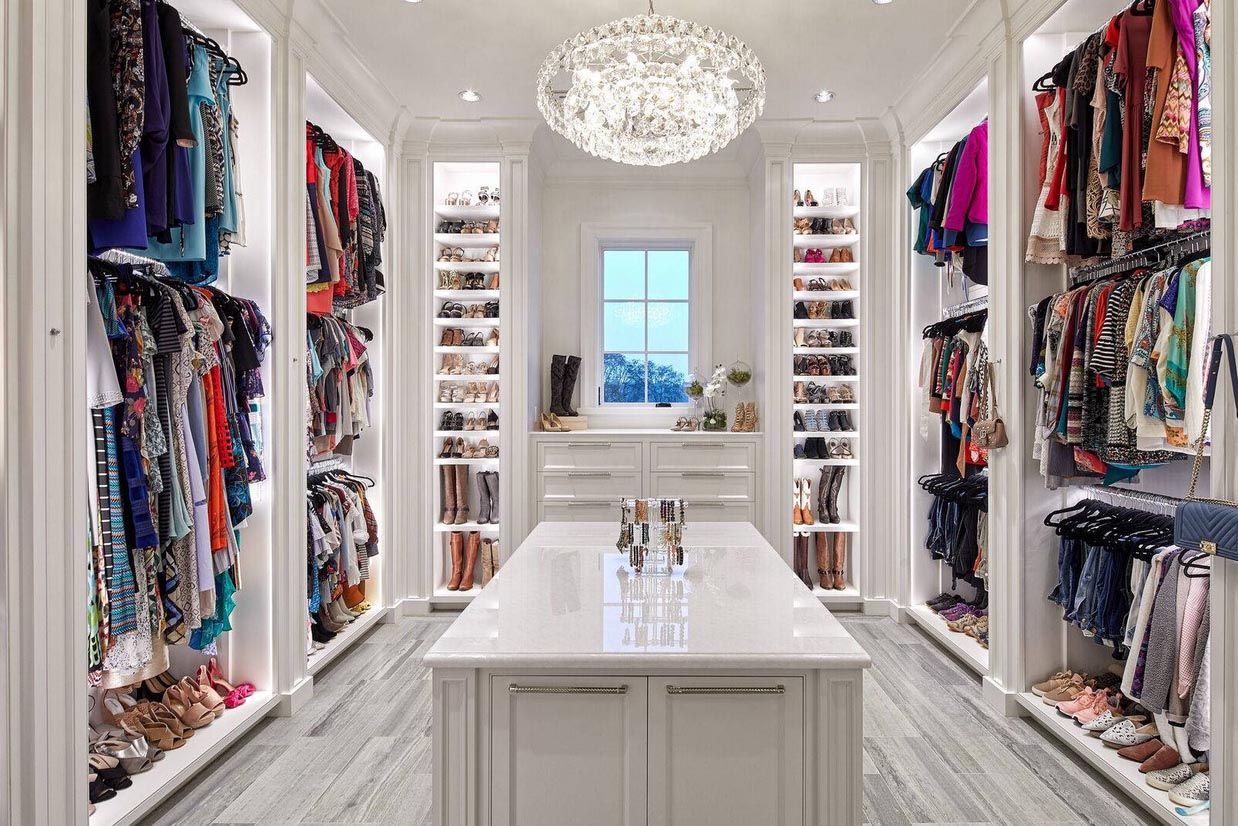 A walk in closet, photo from houzz.com.

Walk in closets are another miracle that I cannot comprehend. How is it even possible for a single person to have that many clothes? My entire bedroom is smaller than this “closet,” and, guess what, I feel like I have plenty of space for my clothes in that room. 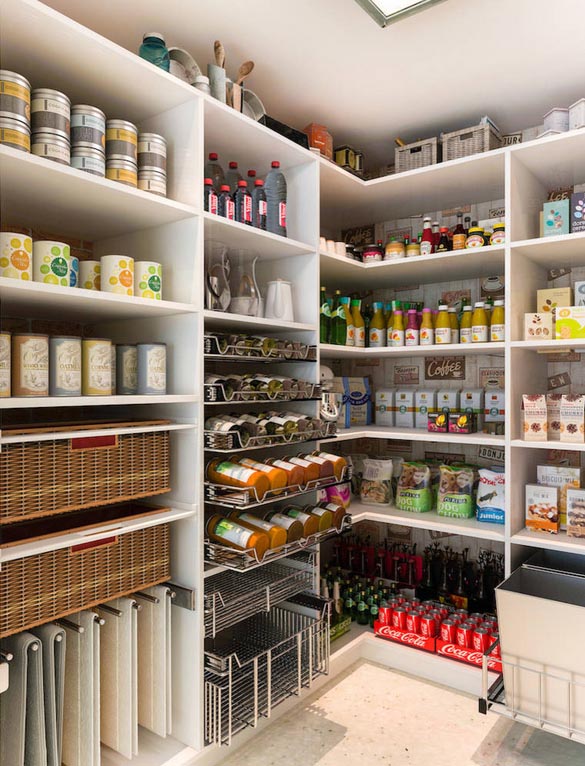 A pantry, photo from houzz.com.

Here’s another photo, featuring a pantry. Looking at photos like this one, I can only wonder whether this is real or staged. Why would anybody need to store so much food at their home? Are they creating reserves for an apocalypse?

There are two people in my household (me and my mother). In terms of size, our pantry is less than 1/20th of the one seen in this photo. It’s just a single shelf in a small cupboard. There we have cooking flour, buckwheat, rice, oatmeal, semolina, a bottle of sunflower oil, baking soda, sugar, salt, cinnamon, cocoa powder, coffee, linden tree flower tea, and a pack of green tea leaves. Occasionally, we also buy some pearl barley, dried peas/beans, various nuts and dried fruit, but we don’t keep those at home at all times. Most of the time, there is a bit of bread too, we usually buy a single loaf of bread when we go grocery shopping, but once it is eaten, we do not rush to get another one. Sometimes, we also have some chocolate or candies, but those are there only occasionally. And that’s it. In a different shelf we store vegetables and fruits. On an average day, we have about three kilograms of vegetables and two kilograms of fruits at home. Right now, we have a kilogram of potatoes, a couple of carrots, a piece of pumpkin, and a zucchini. And also a pomegranate and some grapefruits. And, of course, there’s also all that stuff that people store in the fridge (milk, butter, cheese, meat, maybe some fish every now and then, jam). Right now, I also have some sauerkraut, a bottle of apple juice, and ice cream in my fridge. For our dogs we have a 20 kg bag of dry dog food as well as some meat that’s stored in the fridge.

The point is, my pantry takes up very little space in the kitchen, we go grocery shopping once per week, usually only when all the stuff that cannot be stored long term is eaten, and the fridge has become visibly empty. We also store at home as little food as possible and buy more only when everything is eaten, this way it is easier to make sure that nothing spoils and must be thrown out. Thus images like this one make me puzzled about how American families even live. It seems just so weird.

For me the idea of decluttering seems, well, interesting. On one hand, I agree that your living space being cluttered with unnecessary stuff that you don’t even use is a bad thing. I definitely favor minimalism and only having things that actually serve to improve your life quality. Living a simpler life with fewer possessions can be beneficial. If some stuff only takes up space and serves no useful purpose, then getting rid of it is the reasonable thing to do. That results in having less things to clean, fewer stuff to organize, fewer possessions to search though while looking for that one thing you need to find right now.

On the other hand, I keep wondering how people even managed to get to the point where they start desiring to declutter their living space. Of course, it is possible to obtain unnecessary stuff by inheriting it from deceased family members of getting it as Christmas/birthday gifts. But most of the time all that stuff, which gets labeled as “clutter,” is something that the person bought on their own. Why do people even do this?

Of course, I have experienced buyer’s remorse, I have regretted purchasing stuff that I didn’t end up using as much as I expected. But for me this happens very rarely. I just don’t buy stuff I don’t need, because (1) I don’t have that much money, (2) I don’t have near unlimited storage space in my home, thus I have to keep in mind that I don’t have room for less than necessary things.

First marketing people persuade consumers to pay for stuff they don’t need. Next, websites earn a profit by offering advice on how to throw out/donate the unnecessary stuff. And a hell lot of waste is generated in the process. After all, humanity is fantastically skilled at trashing the planet and failing to even enjoy the process. It’s not like buying stuff and throwing it out afterwards even makes people happy. Never mind that we lead stressful lives and work long hours just so that we could then waste all this hard-earned money on stuff that will need decluttering.

The modern consumerist lifestyle is just ridiculous. Why do people even participate in this rat race? Because marketing specialists have made us desire some new stuff? If so, then we should understand that following the advice of marketing people doesn’t make us happy. Or is it because we fear that acquaintances will look down on us if we don’t own the newest fancy stuff? If so, then why do we care so much about the opinions of people whom we don’t even like?

I believe that current problems are the failure of the society as a whole, and I usually don’t blame individual people for making poor decisions while shopping. For example, if all the people you know have oversized living rooms, then deciding that you want something different in your own home is not that simple. Besides, it’s not like building codes and regulations even allow small homes in every region. Alternatively, if your work colleagues are snobs who look down on you because of wearing the same clothes every day or having an old car, it’s not that simple to just ignore then, given how it might harm your career. Thus I believe that the society needs to change as a whole.

By the way, in poor people’s homes there is often a different kind of clutter. Rich people buy lots of new stuff for no good reason just because they see some advertisement. Poor people (or people who have lived in poverty in the past) on the other hand, often are reluctant to throw out anything that might potentially still be useful some day. For example, my mother often doesn’t throw out empty plastic jars in which she has bought some food, because said containers can be reused in various ways—you can store stuff in them, you can use them as pots for indoor plants, etc. Even when my mother hasn’t used some item for ten years, she is still reluctant to give it away or throw it out, because some day it might be useful. Thus, she has amassed a lot of stuff, most of which is junk. Which is why I have to help her throw out stuff on a regular basis.