Holidays used to be about spending a few work-free days with your loved ones. So far so good, that’s all nice. Unfortunately, nowadays instead people are coerced to participate in a stressful shopping frenzy instead. People are reminded to buy some gift for everybody they know, otherwise they are somehow guilty of failing to show love. As if giving a weird-looking acrylic sweater to your 2nd cousin proved that you love them. As if failing to give some gift demonstrated that you don’t love some person. As if love could be reduced to stuff that you buy in a shop. As if love could be measured in how expensive some gift is.

Capitalists want people to buy stuff they don’t need. Creating a day on which the entire population is expected to swap around stuff is perfect for this purpose. I’m not going to say that shopping is always bad. After all, due to having physical bodies, people need various stuff in order to survive (food, weather-appropriate clothing, shelter). Then there’s also all that stuff we don’t necessarily need but really enjoy having. For example, I don’t need a DSRL, but I absolutely love having it. If you need some stuff or it at least brings joy to your life, then it’s fine to buy it.

I’m only objecting to people buying stuff they don’t even need. All those things that people don’t even enjoy having. The things that end up in a landfill almost immediately after being bought.

Firstly, people are coerced to work long hours to earn lots of money to buy stuff they don’t really need to impress people they don’t even like. What for? Does receiving some random, weird-looking acrylic sweater or a scented candle even makes us happy? I don’t think so. It only results in our homes being cluttered with too much unnecessary stuff. Being obliged to give gifts (when we don’t really want to do so) only makes us anxious, and unhappy. It robs us of our free time.

And what for? Why do we have to do all that? Because capitalists created some TV advertisements about how failing to give gifts shows that you don’t love some person? Alternatively, do we do this just to keep up with the Joneses and show off our ability to afford giving all those gifts? Conspicuous consumption and striving to obtain status goods only makes people worse off. It’s a rat race that hurts everybody and has only losers. It results in everybody getting stuck with an exhausting and repetitive lifestyle that leaves little room for enjoyment and relaxation.

In my life, I have received some gifts that made me extremely happy (from people who knew me well enough to correctly anticipate what I would like). I have also given gifts to people when I wanted to do so. If you want to give a gift to some person, then by all means do so. Here my objections are only about all those meaningless gifts we are socially expected to give to every single acquaintance we have. Society pressures people to conform to whatever the majority is doing, and marketing people exploit human desire to belong and be like their peers by creating a narrative that giving lots of Christmas gifts is the right thing to do and what everybody else does.

Secondly, exchanging superfluous gifts creates a lot of waste and pollutes the environment. The overwhelming majority of all the stuff we harvest, mine, process, transport, buy, and consume is deposited in a landfill within just a few months after the date of sale. Only a fraction of the materials used to produce consumer goods (including the goods themselves) are used for more than just a few months. Just think about the life cycle of consumer goods. Precious (and often finite) resources are extracted from the Earth, greenhouse gasses are produced during manufacturing and transportation of the goods. And then said goods are just thrown out soon after the date of purchase and turn into a waste management problem in the nearby landfill. We live in a throw-away culture, a society dominated by consumerism. Shoppers are buying more stuff and discarding it faster than ever resulting in overconsumption and excessive production of short-lived or disposable items over durable goods that can be used for a long time, cherished, repaired.

Why am I talking about the throw-away culture in a blog post about Christmas gifts? When a person buys stuff for themselves, at least at the moment of the purchase they want this stuff. The problem with gifts is that it is hard for somebody to correctly anticipate what another person would like as a gift. Thus a significant portion of all the Christmas gifts end up being things that the recipient doesn’t like at all; things that will land directly in the landfill if they cannot be easily re-gifted.

This is why I would like to encourage my readers to think about the things they are about to give to other people and try to pick something that won’t land directly in a landfill.

Here’s a conversation I had with my boyfriend last week:

“Is there anything you want for Christmas?”
“Hmm, I’m not sure. Maybe a new sex toy. Oh, I also need a warm winter hat.”
“What will you pick then?”
“I might like sex toys, but I guess I don’t really need more. I do need a winter hat, so I’ll take that.”
“Should I transfer some money to your bank account?”
“Nah. I’ll just buy it for now and give you the receipt afterwards. You can give me the money once I know the exact price.”

I got my new hat two days ago, and I absolutely love it, because I picked it for myself, and thus I was able to take into consideration my own personal fashion preferences.

By the way, my Christmas gift for my boyfriend was a bottle of lubricant. I suppose that doesn’t qualify as a sex toy, but it is close. My partner didn’t specifically ask me for anything, so I just gave him something I wanted him to have (my plan is that the two of us will use said gift together).

With my partner we usually don’t bother with giving each other gifts on specific dates. Instead we exchange stuff every now and then whenever one of us gets something that the other person might want. I bought my hat two days ago, I gave him the lubricant bottle on Tuesday. Since this time it is close to Christmas, I might as well call those “Christmas gifts.” I also just got a bag of gingerbread cookies, I’m planning to share those with him next week. I guess that’s another “Christmas gift.” 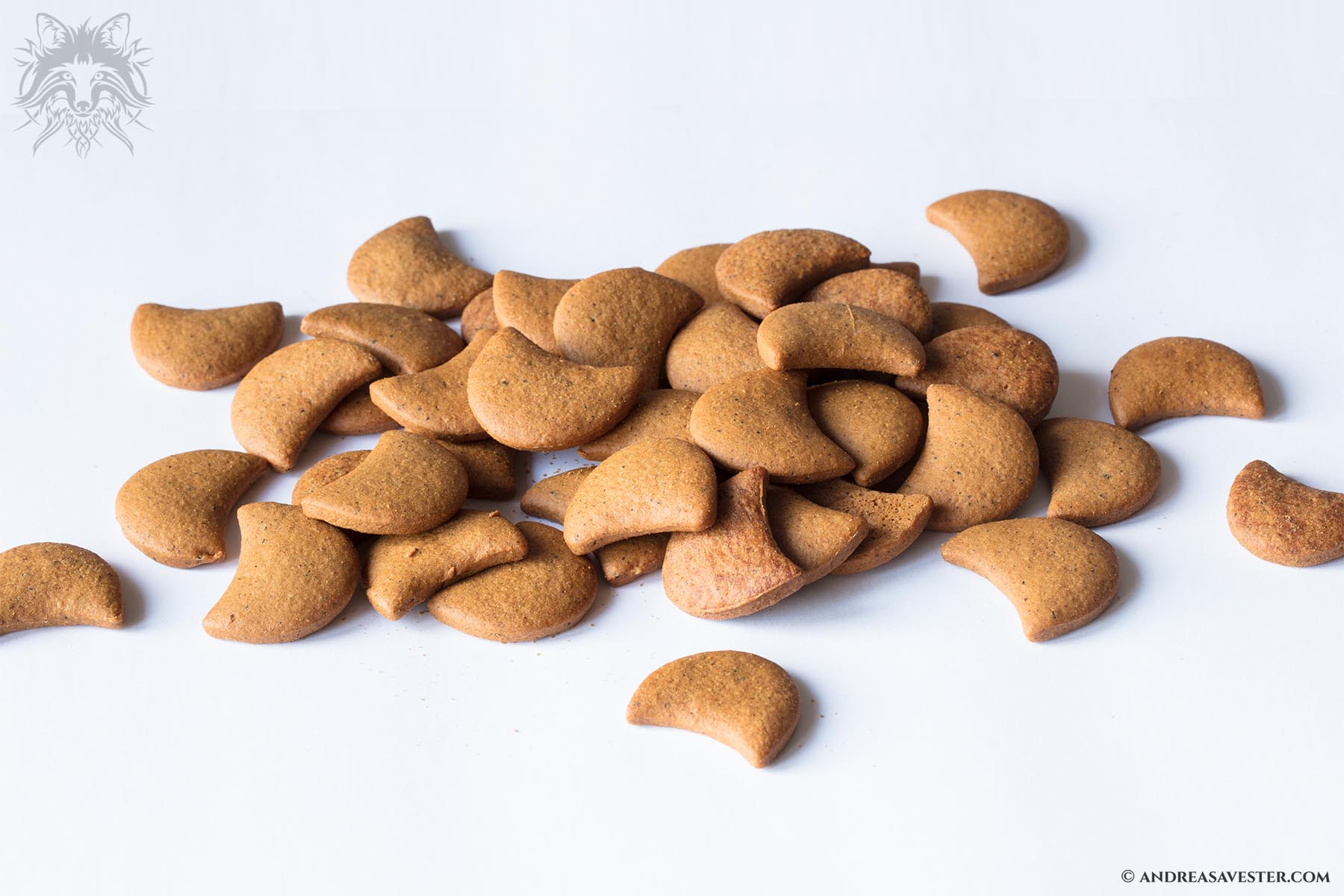 Gingerbread cookies. This is going to be my food for the next few weeks.

Behold: My food. Where I live gingerbread cookies are hard and crunchy. I love their taste; unfortunately bakers sell them only once per year during the Christmas season. I usually buy a big bag that lasts me until February.

If I were obliged to give gifts to strangers, I’d pick something safe, things that everybody can use. For example, chocolate candies, handmade soap, etc. Most people like chocolate, and even if the recipient doesn’t like said candies, they probably have a family member or some friend who will volunteer to eat them instead. The same goes for soap—everybody needs to wash their bodies, thus somebody will use this gift, and it won’t just end in the landfill.

I wouldn’t pick books, jewelry, clothing, etc. for a person I don’t know well. This is where people have strong individual preferences. Unless you know some person well enough to be familiar with their tastes, the probability of giving them a book or some fashion item they like is statistically pretty small.

Speaking of things that you shouldn’t do—don’t just give gifts to other people based on their gender. All those online articles with titles like “Best Gift Ideas for Men/Women” are doing it wrong. Many women don’t like romance novels. Many men don’t like whichever alcohol you consider “a universally desired gift for men.” Individual people aren’t walking collections of all the gender stereotypes out there. You aren’t giving a gift to the average woman out there, instead you are dealing with a unique individual human being who has her own tastes and interests, hence some gender stereotypes about what women, on average, tend to like won’t be helpful.