The film “Dragonslayer” was released on June 26, 1981, forty years ago.  A box office failure at the time, it has gone on to be a cult classic. Its titular dragon, Vermithrax Pejorative, is considered one of the greatest dragons in film history, all done with practical effects.  The film scores highly on Rotten Tomatoes. 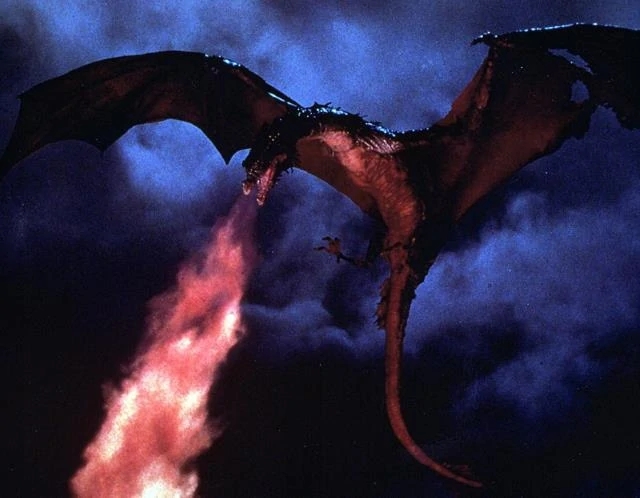 The movie raised eyebrows in 1981 for its partial nudity because this was a Disney co-production, alongside Paramount. It stars Peter MacNicol (Ally McBeal, Numbers) as Galen, a sorcerer’s apprentice; Caitlin Clarke, a widely regarded stage actress; and Ralph Richardson, one of the three giants of British stage theatre (along with John Gielgud and Laurence Olivier). MacNicol actually hates the movie, and doesn’t list it on his CV. But many in hollywood love the film, especially for its special effects and believable fictional medieval setting.

A review found on wikipedia says:

Dragonslayer is a compelling and often brilliant fantasy film; it is also, however, a movie which is at odds with the normal internal structure of the typical “hero myth”. It first tries hard to evoke a certain time and place and then tries just as hard to reject the necessary, and expected, limitations its particular setting and historical era impose. To put it bluntly, Dragonslayer is not content to conform to the strictures of the genre and to tell a rousing good story; it seeks, as well, to impose modern sensibilities on its medieval characters and plot—twentieth-century political, sociological, and religious sensibilities which only serve to dilute its particular strengths.

I disagree.  As allegory, it makes brilliant political and social commentary of today without breaking the fourth wall.  The willingness to challenge the audience and make them think without relying on tropes is a breath of fresh air.  Why should movies set in fictional lands (especially fantasy tales) follow real-life medieval history?  This was a far more interesting and better made film than most “swords and sorcery” films of the era (e.g. Conan, Krull, Clash Of The Titans).

This was one of the film’s trailers.

The full film in was uploaded (illegally) to youtube, in widescreen format: