When a Twitter user at the handle afroSHIRL requested a voluntary sterilization, she was told she shouldn’t get the procedure because she wasn’t married and her future husband might want kids. She rightly pointed out that this implicitly meant to the doctor that her body belongs to a man she hasn’t even met yet. The trope itself is the meeting point of two virulently misogynistic ideas: The first that a woman’s worth is defined by her appeal to men; and the second that procreation is her duty.

Most self-identified feminists will recognise why these premises are troubling. What I hope is that we’ll start to recognise them when they’re being wielded against trans women, too: 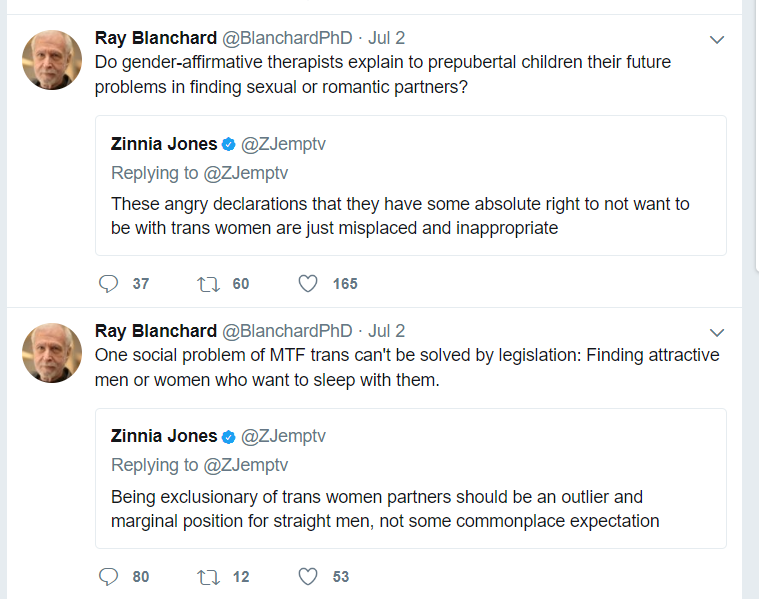 Did anybody else hear that? It’s the sound of the bottom of the barrel being scraped.

Ray Blanchard’s previous appearance on Against the Grain was my fact check of the BBC documentary “Transgender Kids: Who Knows Best?”, in which Blanchard said one of the most stunningly cissexist things I’ve ever had the displeasure of hearing:

“Transgender activists don’t like the high rate desistance to be talked about because if you know that 80% of gender dysphoric children are going to end up as ordinary gay men, I’m going to encourage all of them to adapt to their anatomical sex and the handful that are destined to be transsexual no matter what will sort themselves out later.”

Meanwhile, medical practitioners who might view such a statement to be a confession of malpractice have gone on to produce a methodology that does not require anybody to, quote, “sort themselves out later,” nor do ethical counselors consider it a promising sign that one’s counseling created a need for more counseling after the fact.

I’m not sure how bloated your ego has to be to believe the things Blanchard says but my impression of him is that this man is the Donald Trump of trans research.

Now here we are, six months later, seeing Ray “they’ll sort themselves out later” Blanchard lauded by The Stranger as an “expert,” recycling the trope that someone’s body does not belong to them, but to a man they haven’t met yet. I won’t hold my breath, but maybe that’ll help Katie Herzog figure out why she’s under fire for her contrafactual twaddle.

Are we going to start “warning” cancer patients that their fatigue and weight loss from chemo might be viewed as unattractive to shallow dickweeds in this fucking misogynist lala land? Are we going to start telling people recovering from horrendous injuries and chronic illness that any lifelong disabilities will render them undesirable to a sizeable portion of thoughtless fuckheads in this misogynist lala land?

I’d say it’s un-fucking-believable, but that’s transmisogyny for you: Being reduced to an object to be appraised only for its ability to get Dr. Blanchard’s dick hard.

And this is the man we used to have to impress to get transition healthcare.

P.S. For bonus irony, the woman he tweeted at is married. You can’t make this shit up. I will never ever underestimate the motivated reasoning of a bigot ever again.