Democracy 3 looks like this when you first enter a game: 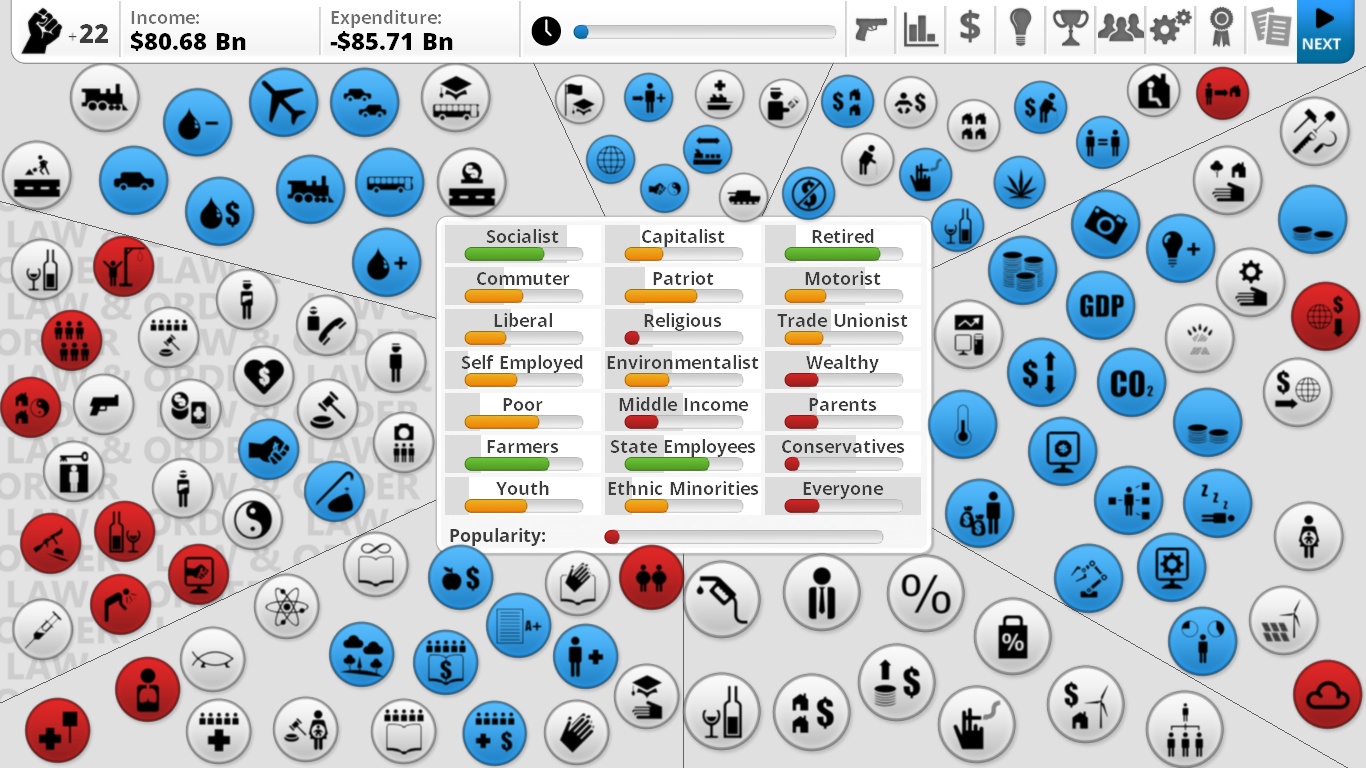 This is meant to be an abstract political simulator, making up for complexity what it lacks in pretty graphics. Nonetheless, its a useful tool for me to think about political situations and to question the assumptions made in the game–i.e. the game codes “more police = less crime,” which is certainly disputable. Here, I’ve opened a game of Canada, and D3 has doled out to my government a combination of contemporary problems and randomly generated ones. It is also biased to generate disastrous starts in general, the idea being that it’s more fun to fix problems created by your political opponent, freshly unseated by an offscreen election. Of course you can deliberately drive your country into the ground, too, but I play this game to test my political ideas, at least as conceived by the D3 creator.

In the centre of the main screen are the voting demographics. The gray bar behind the text indicates how populous the demographic is (i.e. ~80% of simCanada supports Socialist policy) and the coloured bar represents how pleased that voting demographic is with our current policy (i.e. Socialists are generally satisfied with current policy). When it’s election time, winning another term will require me to please at least more people than my opposition. But the election is, thankfully, 20 turns away–each turn is a quarter, so 4 turns makes a year, and the Prime Minister serves 5 year terms. We have plenty of time to work up popular support.

Nobody is a single issue voter, however. The demographics don’t total up to 100% because each simulated population has between 2-5 voting interests that are ranked. For example, the simulated college demographic are all in the “Youth” category, skew towards the social liberal category, and can land pretty much everywhere on the economic spectrum. But within that demographic, there may be differences in how important the policy is–one can abstract that people with strong social liberal tendencies could be supporters of gay rights, for example. Youth tend to be pleased with policies that improve access to education or provide more opportunities for entry-level careers.

The white bubbles in the screenshot are policies; the blue are outcomes; red are crises; green, not yet pictured, are boons. Policies, crises, and boons all contribute to or detract from your outcomes. In turn, outcomes can contribute to boons and crises. Some crises at the start are contemporary (for example, ghettoization in Canada, representing the appalling state of Indigenous reserves and to some extent gentrification) and others are randomly generated (one of the crises is a doctor’s strike, but there is nothing of that nature occurring right now that I’m aware of).

Just like in real life, you can scrap a policy (which removes the white bubble from the main screen), introduce new ones (which brings a new white bubble in), or amend existing policies. When you mouse over a policy, you can see its influence on your outcomes–unlike the boon bubbles, green doesn’t mean “good,” it means it increases the outcome (i.e. poverty is a green arrow to crime) and red doesn’t mean “bad,” it means it decreases the outcome (i.e. State Health Service is a red arrow to the “Disease Pandemic” crisis).

When we focus on a policy, we can see what it effects. When we focus on a crisis, for example our Organized Crime crisis, we can see what is contributing to it as well as its consequences. Here organized crime is receiving support from primarily from our current gambling policy (no government mandated limits), but is taking some hits over non-criminalized (though not yet regulated) prostitution, legalized cannabis, as well as the authority/budget of our intelligence and police services. 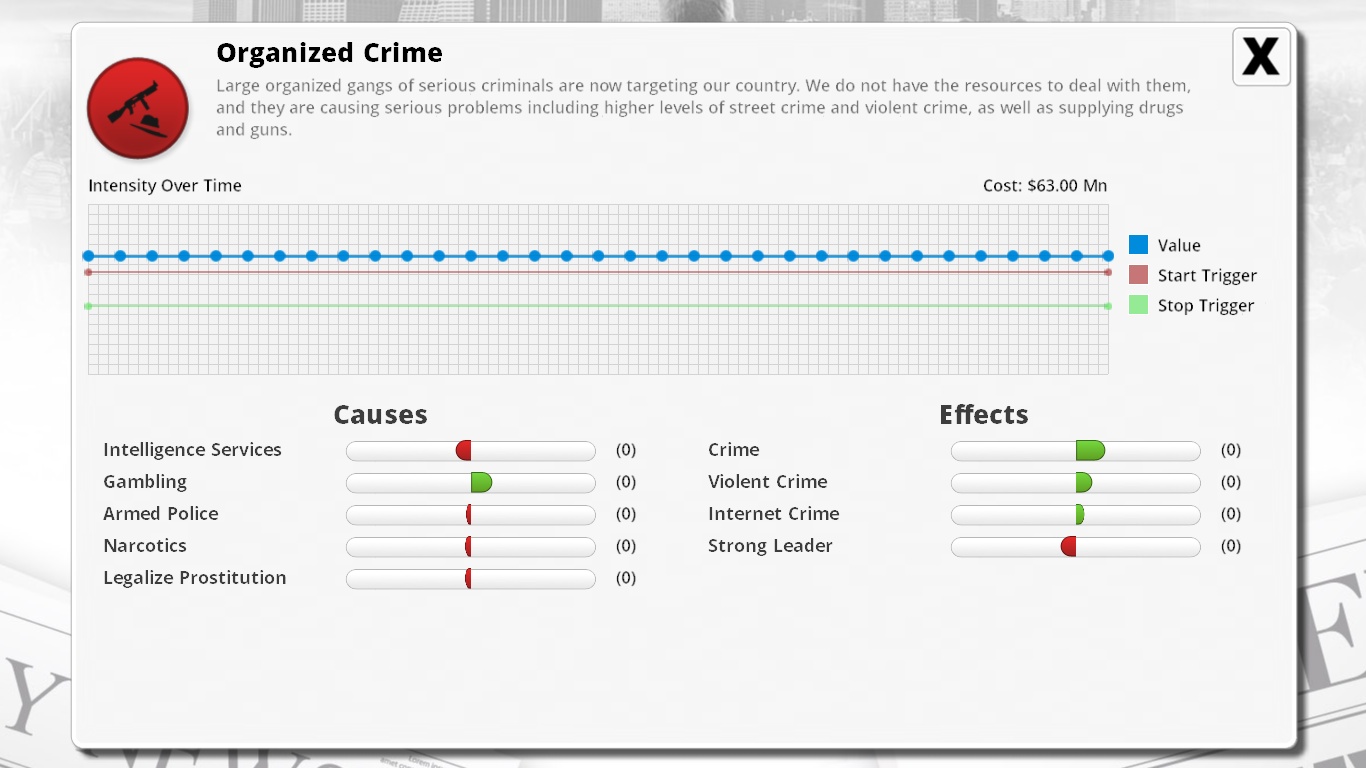 On the right hand side, we see the consequences of this crisis: Crime, violent crime, and internet crime are all increased, and the perception that we are strong is taking a hit. This matters to some voters (i.e. authoritarians).

So we’ve got 13 such crises at the start of our alternate universe term: Organized Crime, Ghettos, Street Gangs, Vigilante Mobs, Alcohol Abuse, Antisocial Behaviour, Internet Crime, an Asthma epidemic, an Obesity epidemic, a Doctor’s Strike, high Homelessness, Pollution, and an Uncompetitive Economy. Thanks, simConservatives, for fucking up the country. We are also running a $5 Billion deficit per quarter, which will eventually have to think about.

There will be two parts to this AAR: The first is cutting my teeth on my political philosophy; the second is investigating what assumptions coded into the game can be corroborated by data.

I’m a Keynesian, for example, and I’ve been dealt into a Canada struggling with a recession. This means balancing the budget is currently a low priority for me. Instead I’m setting objectives to make both the public and private sector expand, as well as planning policy to increase lower income earnings by socializing some of their expenses.

“You have to pay it back,” says the supply-side stooge. We will, just not in the middle of a fracking recession.

The second part, investigating the assumptions coded into the game, can be complicated. For example, a number of my crises are related to crime. The game allows me to expand police authority/budget to brute force this problem, but fails to simulate the flipside of this: 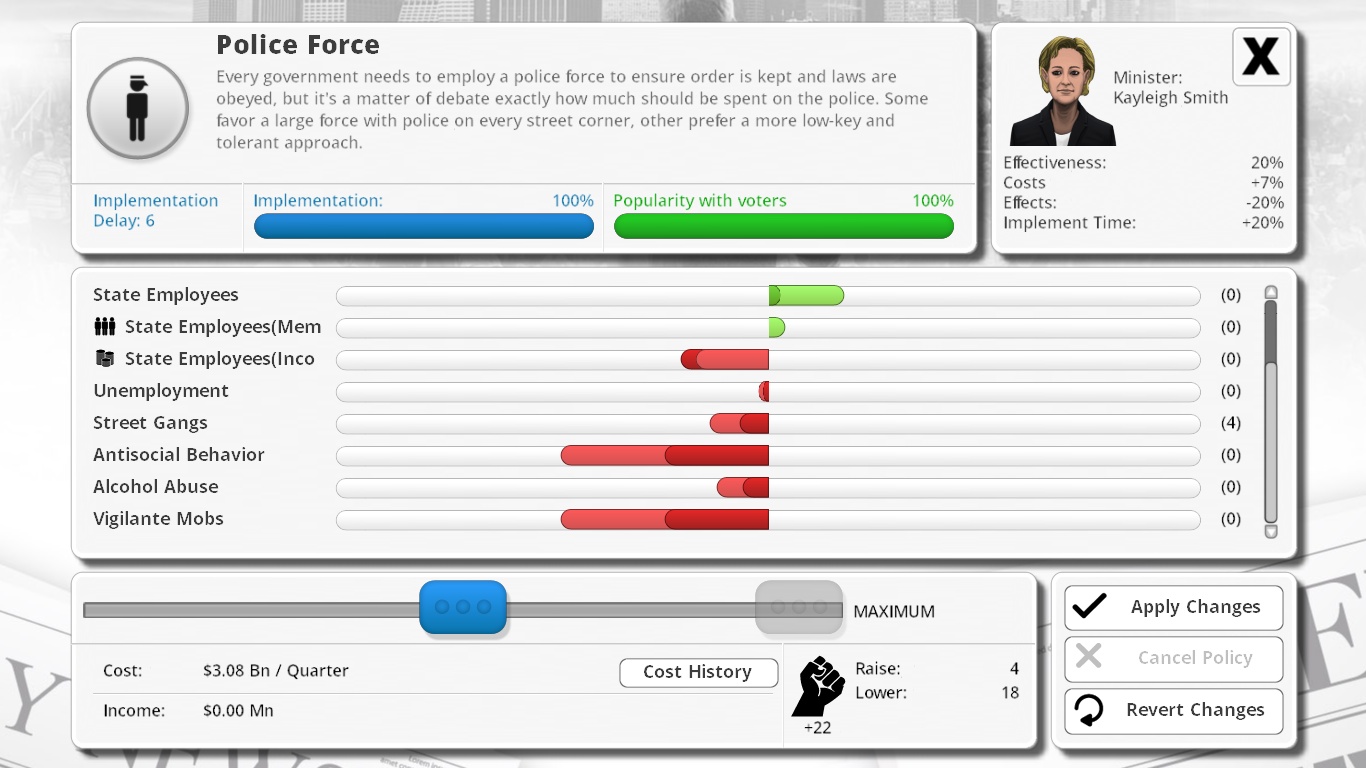 There’s no reason not to double the police budget, according to D3.

We might find upon investigation that some of the assumptions made are untrue, or at least disputable. For example, combining punitive law enforcement with the ability for employers to background check hirees results in the creation of a criminal underclass who can’t get legitimate employment and so resort to crime to make a living. The game simulates the short-term reduction in crime but it isn’t immediately apparent the “criminal underclass” long-term consequence exists in the game. Perhaps it does, and it will be introduced as a new crisis if we opt for a punitive, rather than rehabilitative, law enforcement approach.

Crises are the game’s way of throwing curveballs. In addition to the contemporary and randomly generated crises doled to us at the start, certain aspects of our policy can create new crises, which then go on to influence certain outcomes. Since outcomes often have interdependent relationships, some crises cascade across civil sectors. Our various crime crises are costing us a fair bit of money, and our actual “Crime” outcome is damaging revenues for a number of industries (tourism, for example). Other crises like natural disasters just pop in unannounced.

We then get to the meat of the game–introducing, amending, and repealing policy. The game gives you a certain amount of political capital every turn (quarter) based off the loyalty and competence of your Cabinet. Debate and interference from the official opposition is abstracted as the variable cost of capital depending on the law–laws with popular support cost little capital, representing meek or minor debate from the official opposition. Contentious laws, policies either unpopular in general or anathema to certain groups, can take several turns to pass.

D3 seems to assume you’ve been awarded a majority, since you have essentially undisputed ability to propose and pass legislation–your bills will always pass as long as you have enough political capital to spend. Instead, you have to worry about pissing off extremist groups, some of whom might plot your assassination. At the start of our game, there are two demographics that are already pissed off: The religious, and the social conservatives. Since their “solutions” caused these disasters to begin with, we’re not ever going to try and please them, which means we have to consider the possibility of terrorist activity from these groups. 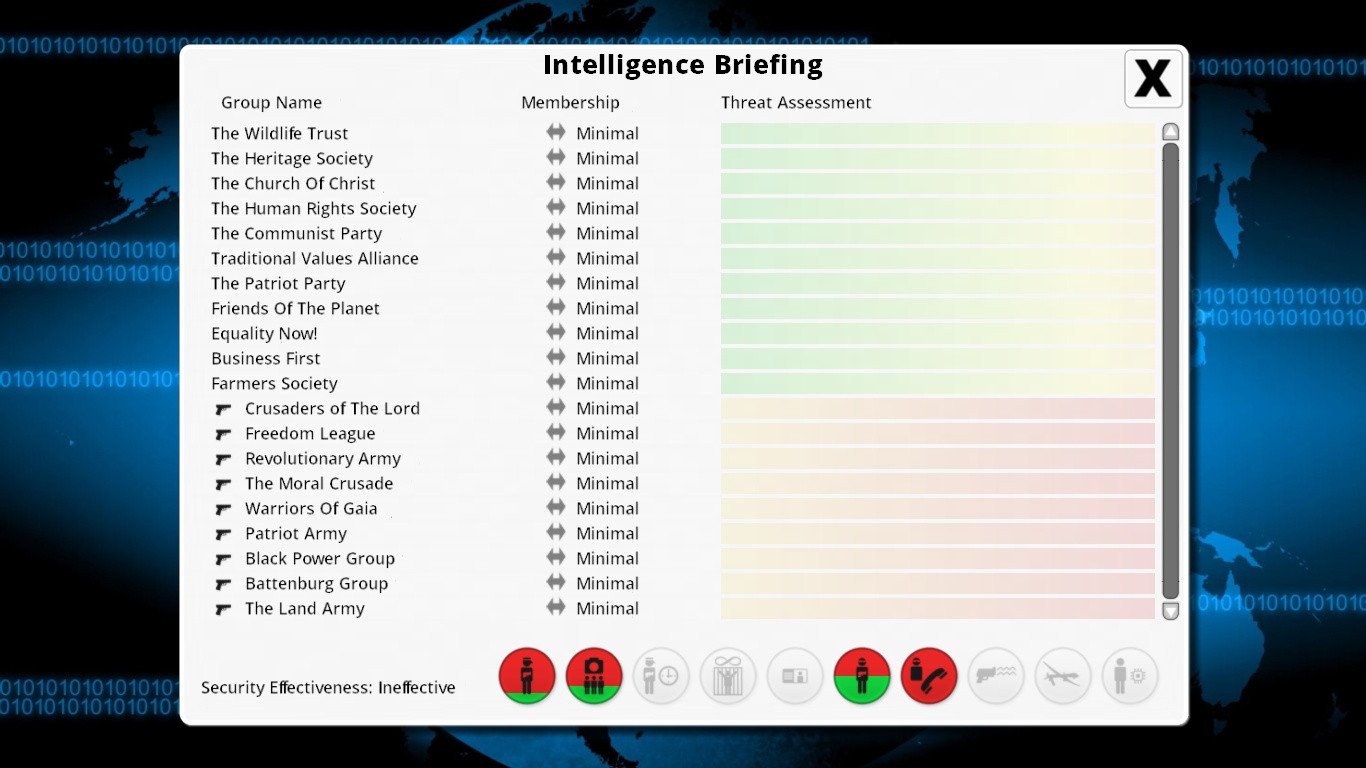 The ones without the pistol are lobbyists. With the pistol? Take a guess.

While I would have liked to simulate a minority government, D3 simply doesn’t give that option. Still, we will play with what we have: A strangehold in the Legislature and the Senate and a lot of pissed off extremists.

With all that background covered, we can now decide our first order of business. Siobhan has been freshly  elected on promises to fix the abysmal state of our country thanks to conservative mismanagement and we’re in a political honeymoon (translating to lots of political capital in my first few turns). This means we need to prioritize contentious legislation and piss off a lot of people right away, since it will be very costly to wait until after the honeymoon. Pragmatically, this means the laws that piss lots of people off will be in older memory come election time.

We have 13 crises, plus we’re currently running a deficit. That makes 14 problems to solve in 20 turns.

That said, what will Bill Sim-1 actually be?

We have a crime problem, and a very complex one. We don’t want to follow the example of the United States and create an overall punitive strategy to address it–we know the effects of a long term “law and order” crackdown just exacerbates class divisions along racial lines. Our long term strategy should address the destitution that creates opportunity for crime, and our reports indicate that at the core of much of our crime is a gambling problem.

We’re going full nanny-state here, and proposing to regulate casinos such that the government defines a fairly strict ceiling for stakes. This reduces the access to vulnerable customers that loan sharks rely on–one of the last branches of vice activity financing organized crime.

This is the one and perhaps only bone we throw to our religious voting demographic. Their reasons for opposing gambling have to do with theology–I’m much more pragmatic. I just want to cut off the black market that’s financing organized criminals. They can’t make much from prostitution, since its gray market, and their biggest drug market is already out of their hands.

The capitalists are pissed and it does put a tiny dent in the GDP. But the costs of intercepting one of the last gateways to organized crime is worth it–the particulars during the debate bring me down to 8 political capital, but the bill receives strong bipartisan support.

It will likely be the last bill to do so.

Results of Turn One:

Opposition parties propose to expand police search authority such that it no longer requires an arrest. This foolish notion is promptly driven into the dirt by yours truly. 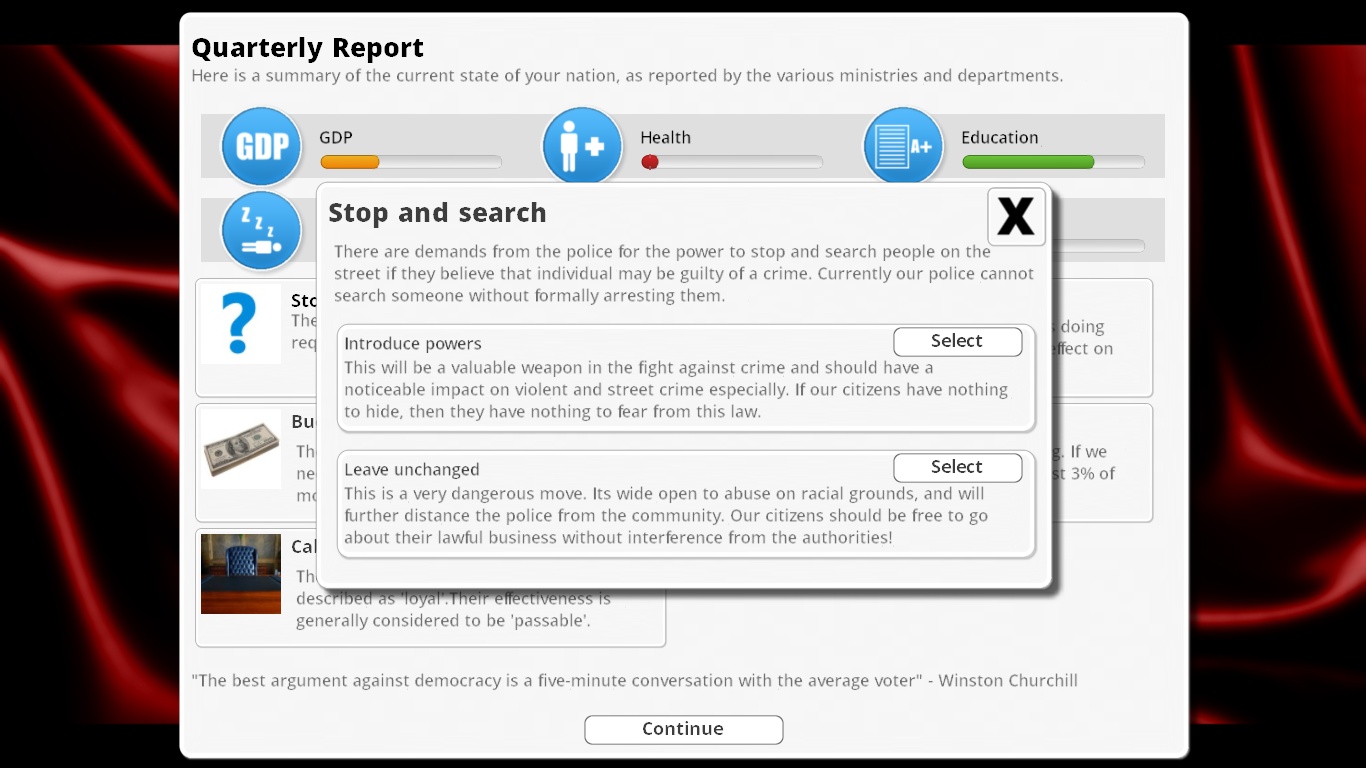 The deficit shrinks to a little over $4 billion, and the economy is reported to be on an upswing. 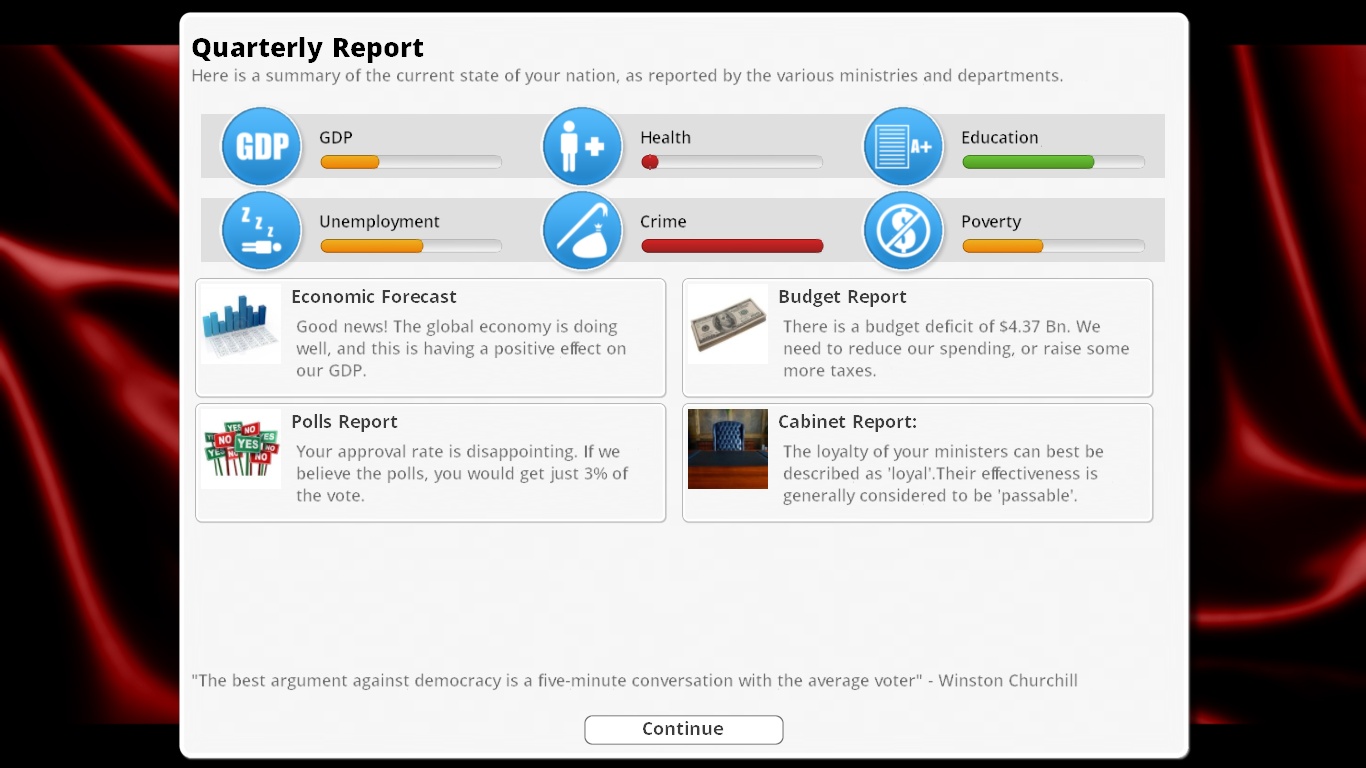 However, none of our crises have as yet ended, and crime is still unconscionably high.

With conservative pundits across simCanada howling in anguish at the notion of a filthy progressive in the PM’s office, what zany things can we expect from Siobhan’s administration next?