Content Notice: Transmisogyny and the “deceptive trans” trope, invocation of t-word slur, detailed description of the murders of trans women.

Standard disclaimer: My Transition Reactions series is a mostly anecdotal recount of fucked up ways people respond my gender variance. 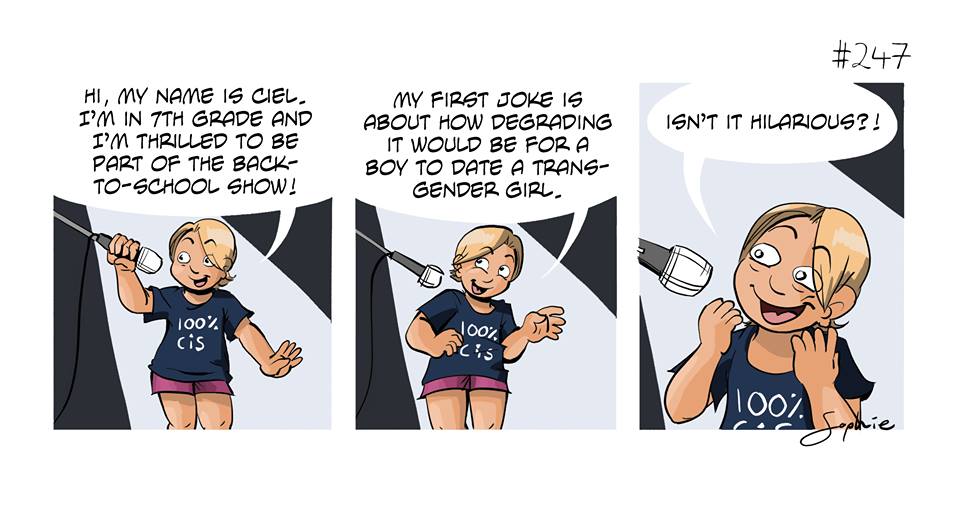 If you look at the details surrounding every murder of a trans woman, you will notice a common thread across all of them: She was found attractive, her gender status was later discovered, the murderer will express something to the effect of “I was tricked,” then the trans women is killed in a graphic scene which almost always obliterates her face. 3 times out of 4 she’s also black.

It is distressing, if extremely important, to dissect these murders. When we dig just a little, we can spot a literally fatal flaw in our culture’s understanding of masculinity and gender variance and how this comes down on trans folks, and trans women especially, and black trans women triply. This flaw has a body count, and the puzzle pieces that contribute to its picture need to be challenged–aggressively, and without apology. And while the people performing the actual murder of trans women are mostly men, it is important to note that feminists, TERFs, and cis lesbians can all contribute to this violence by supporting the cultural tropes underlying the violence.

We start with toxic masculinity, restrictive norms imposed on men that defines their manhood in highly specific ways. Men don’t cry, they’re tough and like to “rough it out” when they disagree, men like sex, men like women, men like bacon, etc. The list goes on. No shortage of impositions thrust upon you because you were assigned male. Because Western masculinity is married to sexual activity, and as that sexual activity is still to this day assumed to be heterosexuality, many men will often tie their sense of manhood to their ability to bed women.

The flip side to toxic masculinity is punishing transgressors of masculine norms. In general, TM is something that has to be continuously proven, often in violent ways. It works by questioning one’s manhood for doing x, and then you have to repent by doing y. The act of imposing punishment y, through violence or coercion, is considered masculine “dominance.” It’s a constant power struggle, a rigged game designed to constantly put people down for not adhering to the arbitrary expectations of masculinity. As long as you continue to play the game, you are never secure in your manhood, because it is by design a constant fight to reassert one’s manliness.

Because these men adhere to a highly sexualised understanding of their own gender, their masculinity itself can be threatened by “sexual deviants,” because “deviants” aren’t typically visible and anybody could be one. Whether it’s men who enjoy letting their female partners take charge in bed or whether it’s men who prefer the company of other men, you can often see a distinct contempt for men who don’t fit the heterosexual norm.

As they are often perpetrators of this contempt, considering these qualities to be unmanly and disgusting, the idea that they could “accidentally” fall for a trans women positions them as their own targets. The foundational belief is that trans women are still men, or male, or whatever excuse you can concoct to exclude us categorically from womanhood, and so being attracted to a trans woman is the same thing as being attracted to a man, and being attracted to a man is anathema to hypersexual masculinity. If we are found attractive before it is discovered we are trans, these men will interpret their attraction of us to be a threat to their heterosexual masculinity, and will be compelled by their restrictive beliefs that homosexuality is bad or deviant to reassert that masculinity.

They will defend their egos by saying they were deceived or tricked. Here’s the best part–it’s 2016, and still men who confess to these murders can and often do avoid murder charges. They get slapped with something absurd, like manslaughter, as if toxic masculinity is an unfortunate circumstance like getting into a car accident and not a deliberate choice.

There’s a lot of transphobia born of ignorance that I can patiently explain, the first time someone invokes it (~90% of the time they don’t listen, so I explain it again, less patiently). Most of the other Transition Reactions didn’t actually involve me steaming out of my ears. They were calm conversations, even if the other side didn’t interpret it that way. But this–this is the one trope that will have me screaming in your face. The idea that trans women are deceptive is literally fatal, and it is inexcusable to perpetuate or support this idea. No calmness here.

The “deceptive trans” trope is not exclusively an idea from toxic masculinity. TERFs often dedicate hundreds, if not thousands of pages to produce arguments about how trans women are still men, in some way or another. Cis lesbians sometimes proudly declare their gold star status in a way that frames it about “never having anything to do with dick,” as if a lesbian loses the right to call herself lesbian if she loves a trans woman. The harm in these declarations sits uncomfortably on the same premise that leads to our frequent murders, that we are not “real” women and that attraction to us doesn’t “count” as attraction to women.

It’s not just us being gatekept from gender, it’s our partners being gatekept from their sexual identities. If I’m not a “real” woman, then the straight men who I’ve had sex with aren’t “really” straight and the gay women I’ve had sex with aren’t “really” lesbian. It is harmful, unfair bullshit to our lovers–and unfortunately, some of our lovers take that out on us.

It is the first part of that sentence–“unfair bullshit to our lovers”–that is often the focus of Hollywood depictions of gender variance and trans folk. In a film about trans folk, they’ll inevitably make a character’s transition all about how it affects a cis person. The latter part–the part where trans people are sometimes punished by our own lovers for this–is a nuance never explored in mainstream media. And so even Hollywood contributes to this idea that a trans person’s gender variance isn’t their own business. It’s the business of cis folk. They need to know they’re being attracted to a freak so us trannies should just blurt out we’re trans any time any remotely flirtatious conversation occurs, even if that results in increased assaults and murders because the actual crime here is being attractive while trans. And if we don’t disclose RIGHT AWAY AND ALL THE TIME JUST LIKE CARRY A NEON SIGN OR SOMETHING, we are “deceptive,” even if we were just minding our own fucking business and not seeking a flirtatious encounter.

“Hi I’m Siobhan I’m trans and I’m telling you that right away because some dickhead on the internet thinks my existence constitutes deception and obviously I care about the opinions of every dickhead on the internet so I thought I’d tell you right away because we made eye contact and I wanted you to know also I like pina coladas rope bondage and scotch can I buy you a drink??”

That we are perfectly comfortable with ourselves is seldom the focus. That everything I’ve just described is on the cis person, and not on me, is never the thesis of these films. Always transition is framed as an issue of how I affect other people, and never how cis people might affect me. Given the sheer volume of violence affecting my community, I say it’s high time we forget about how trans folk affect cis folk and start talking in detail about how cis folk affect trans folk. And we can start with the myriad of violent ways cis folk respond to the notion that trans women aren’t “real” women and how this Isn’t. Fucking. Funny.

*In case it’s not clear, Assigned Male is by a trans woman, and she is mocking the trope, not supporting it.

HAHAHAHAHAHAHA No » « Isn’t the point of an initialism to be snappy?