Over on Death to Squirrels, Iris discussed the complex interaction that leads supposed “compliments” to become problems, even though the issuer of the compliment means well. This prompted me to think about another context in which a similar argument can be made about the types of compliments I’ve received as a trans woman that have made me superbly uncomfortable.

Usual disclaimer: This series represents my experience of gender variance and does not represent a monolithic commentary on the trans community as a whole.

Roughly 330 days out of the year, I choose to express my gender in a deliberately calculated way such that I cause the look in cis people. They tilt their heads and squint their eyes and the question I know they’re asking is “is that a boy or a girl?” I derive no shortage of sadistic glee of making people question their normative conceptions of sexuality–but being deliberately androgynous has the bonus of generally filtering out queerphobes and self-selecting my flirtatious interactions with other queer people.

I also do this because I just plain like being androgynous. Most of the time, I feel very confident expressing androgynously. I don’t really need to justify it more than that, and I shouldn’t have to. I’m not hurting anyone and it brings me joy.

There are 35 (ish) other days in the year where I don’t straddle the gender line, but instead express femme. I still try to queer-code as much as possible with things such as rainbow nails or polished combat boots or pride merchandise, but the confused look I usually get is replaced by either cis men paying attention to me under the assumption I am a cis woman, or cis women complimenting me for doing femme. Just yesterday I found an adorable summer dress and paired it with my favourite leather boots and received compliments from cis acquaintances who’ve never paid me much heed when I was doing my usual look. 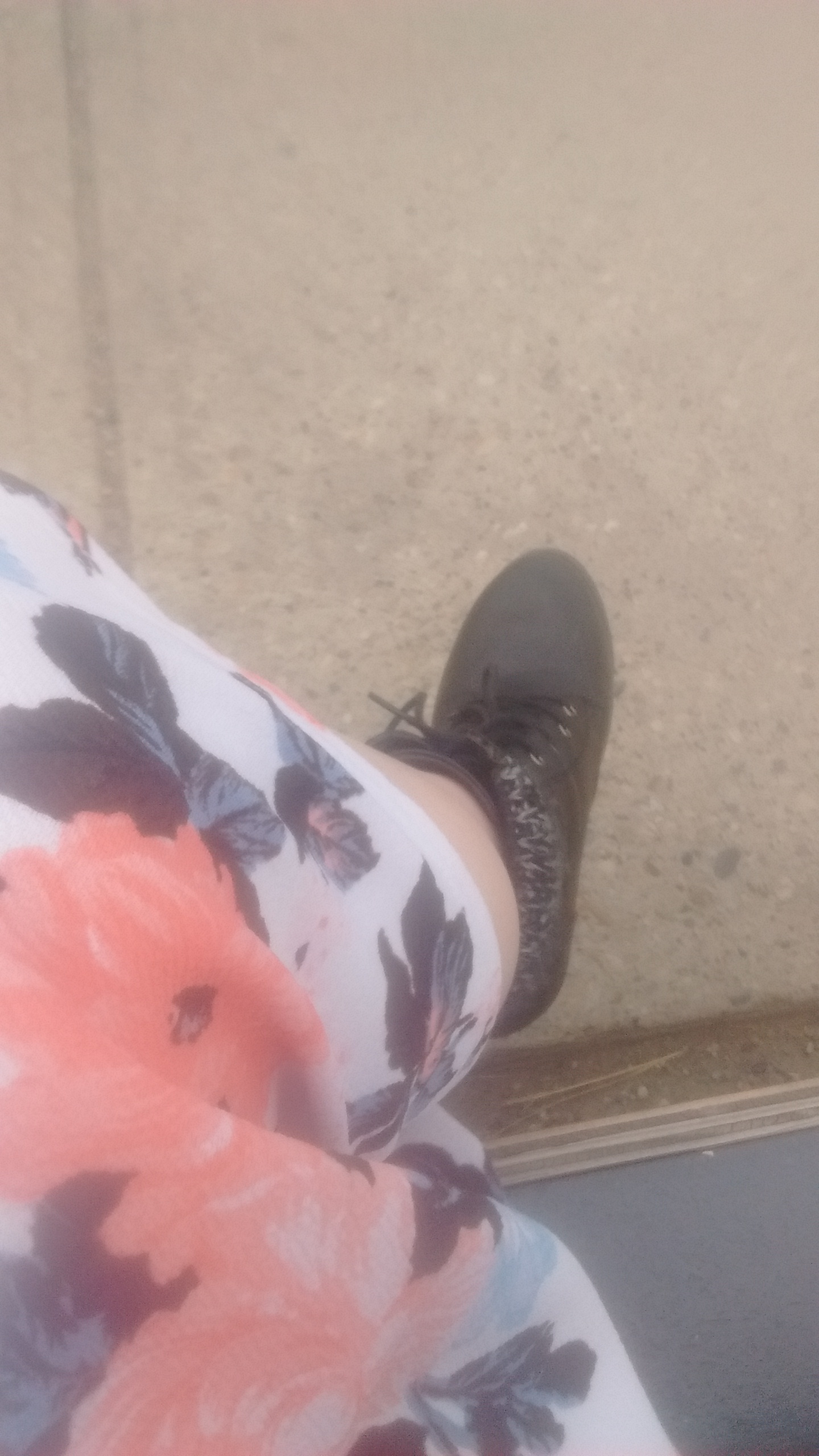 No flowery summer dress is complete without polished combat boots.

What made me uncomfortable was that these same acquaintances have never once provided me any affirmation when expressing as an androgynous woman. They may not be intentionally reinforcing gender binaries, but the selective way in which I receive positive reinforcement suggests that the only gender presentation which will be celebrated is femme woman.

And don’t get me wrong, on those 35 days I do enjoy femme (albeit queer-coded femme). But it’s a bit odd for me to receive compliments. I wasn’t particularly dressed up, and I’ve been more put together in my androgynous formal wear, but never receive the same volume or degree of compliments. Isn’t the confidence I find in androgyny also worth celebrating?

One of the major differences between trans women and cis women is that trans women can never do right by their gender expression. Androgyny or even masculinity is sometimes celebrated when young cis girls do it, because we live in a society that values that. So there is a point to be made that selectively celebrating femininity is a response to its devaluation. Certainly, those people who feel more confident expressing it do not deserve to be punished for that, including me on my 35 ish femme days a year.

But I’m also not cis. I could leave my house and throw a stick and I would hit someone who has strong and simultaneously contradictory opinions on trans women. There is a strong undercurrent that still exists where cis people feel entitled to politicize my gender expression, regardless of how I choose to express it. What happens then is that I am acutely aware of cis people and their entitled invasion of my personal choices, and that power differential is what changes the nature of the compliment. The selective celebration of femme gender expression just screams of the “One True Way to Woman” types, of which there are too fucking many.

Just as cis women can argue that sexualised violence is epidemic and this is what causes cis women to be uncomfortable of so-called compliments from strange men (because the odds that they’re one of the violent ones are too damn high), I too argue that because cis people generally feel entitled to invade my private choices and that it is entirely rational for me to be wary of their motivations, even when they’re being “nice.” Most of the violence I’m vulnerable to starts with unreasonable interrogations of my choices, and selective approval is just another form of that interrogation.

I’m at a point in my life where I don’t need constant reinforcement to validate my transition. I don’t need compliments to be assured I’m making the right choice. While there is a case to be made for giving unconditional positive reinforcement for someone that is new to modifying their gender expression, that reinforcement should not be contingent on their expression being normative. Strictly complimenting me when I’m doing femme just feels like another conversation where cis people dissect my personal decisions.