Summer solstice (Jāņi in Latvian) is celebrated on 23rd and 24th June where I live. And, yes, I do know that solstice is actually a few days before that. So it goes. Here Jāņi is one of the major celebrations, and some of the traditions, mostly remnants of the good old pagan days, are pretty fun. And somehow Latvian Christians who celebrate what is essentially a pagan holiday do not feel any cognitive dissonance. But hey, it’s fun.

Because of COVID-19, this year there was no large public celebration. Instead everybody had to celebrate at home with their family. Thus this time I will write about how Jāņi are usually celebrated in this part of the world in addition to what we could do this year.

During Jāņi, fires are lit and burned from sunset till next morning. In pagan days people believed that the light of the fire bestows power and fertility on the fields and people on which it shines. Nowadays people burn fires, because it is fun. 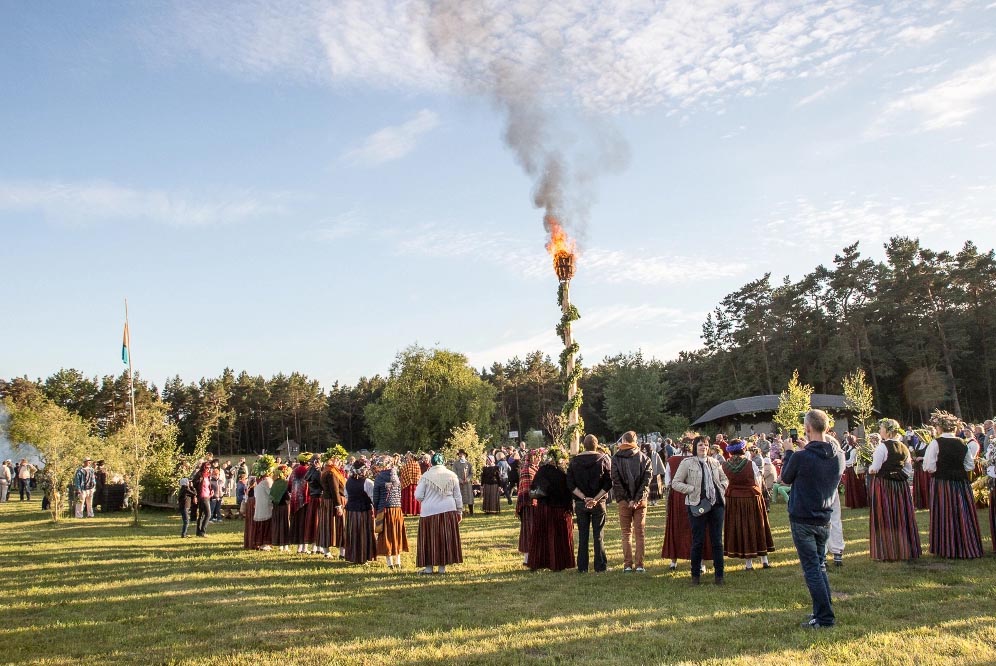 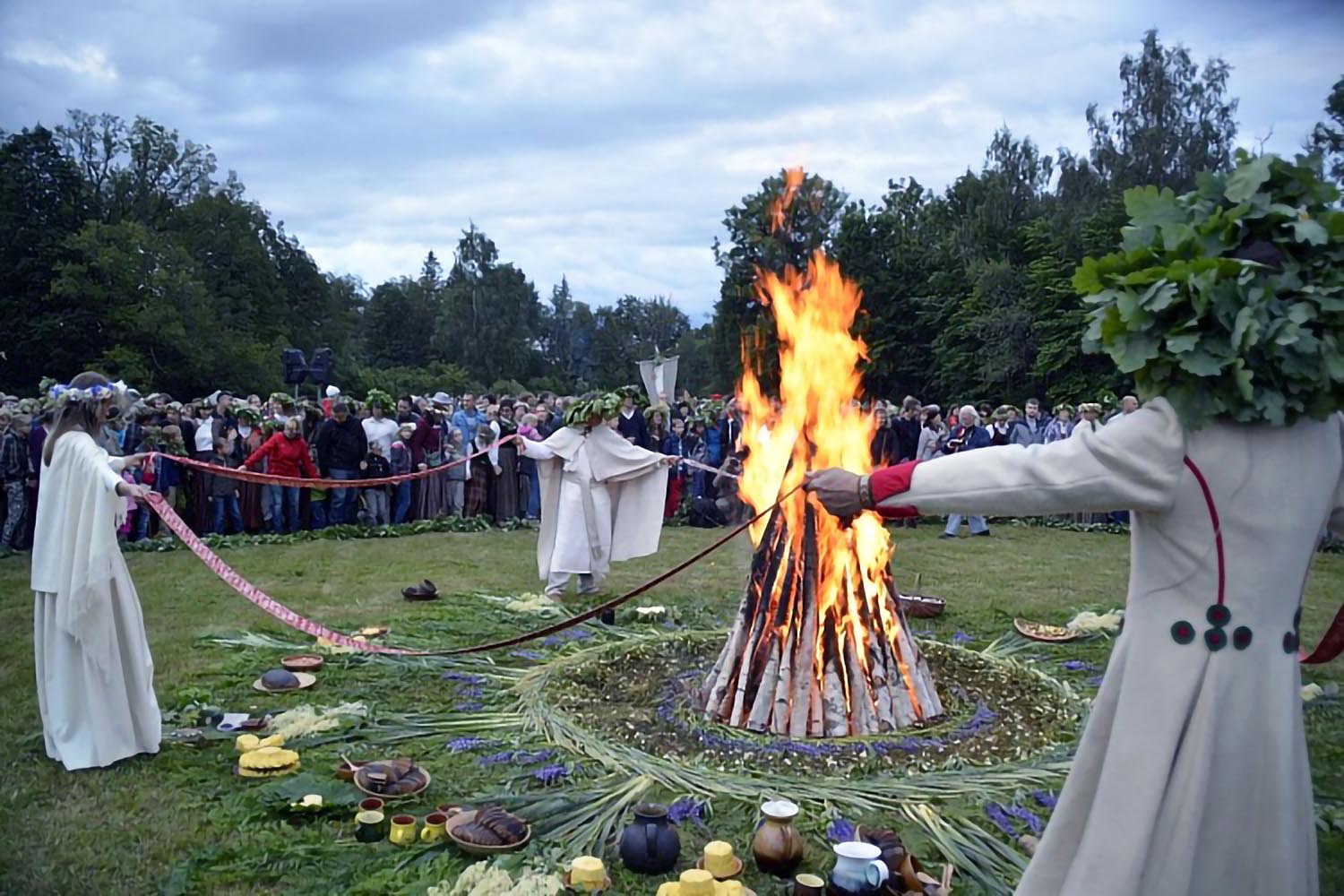 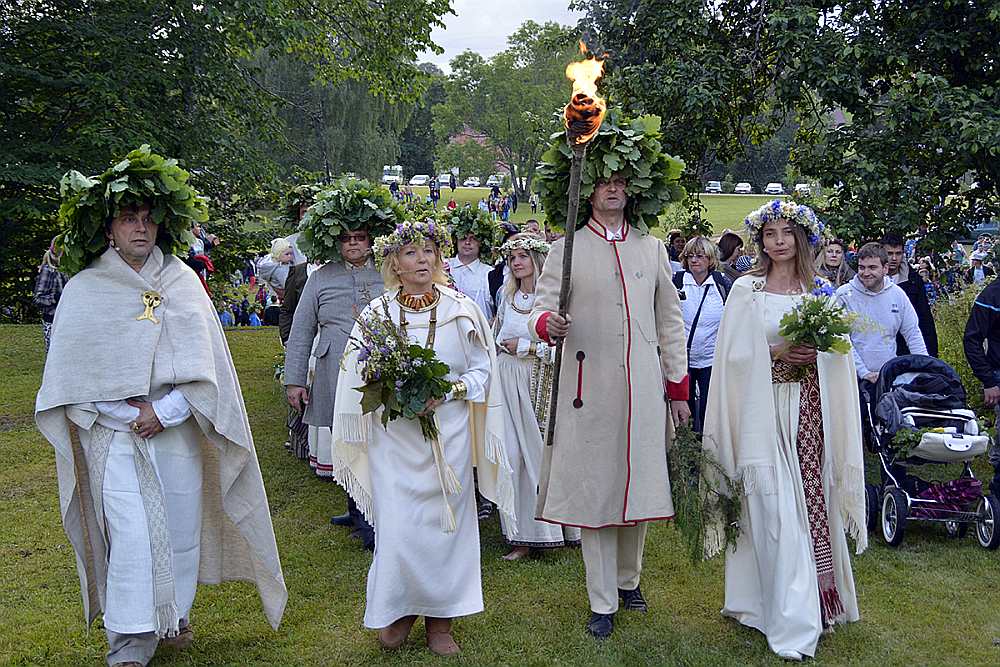 When people celebrate in large groups, then also the fire is large and impressive and there are various fun rituals about it.

When people celebrate at home with their family, the fire is much more modest in size. Also, leaping over the Jāņi fire is said to bring good luck and health through the coming year. Obviously, that’s something you can do only when you have a small fire, and frankly, to me this part sounds risky and I have never tried it.

During Jāņi, people decorate everything with plants. In the countryside, people get their decorations in the nearest meadow. In Riga, we have a zāļu tirgus (literally: a grass market) instead. Basically, it’s an outdoor market in which you can buy various plants and all kinds of other nice stuff. 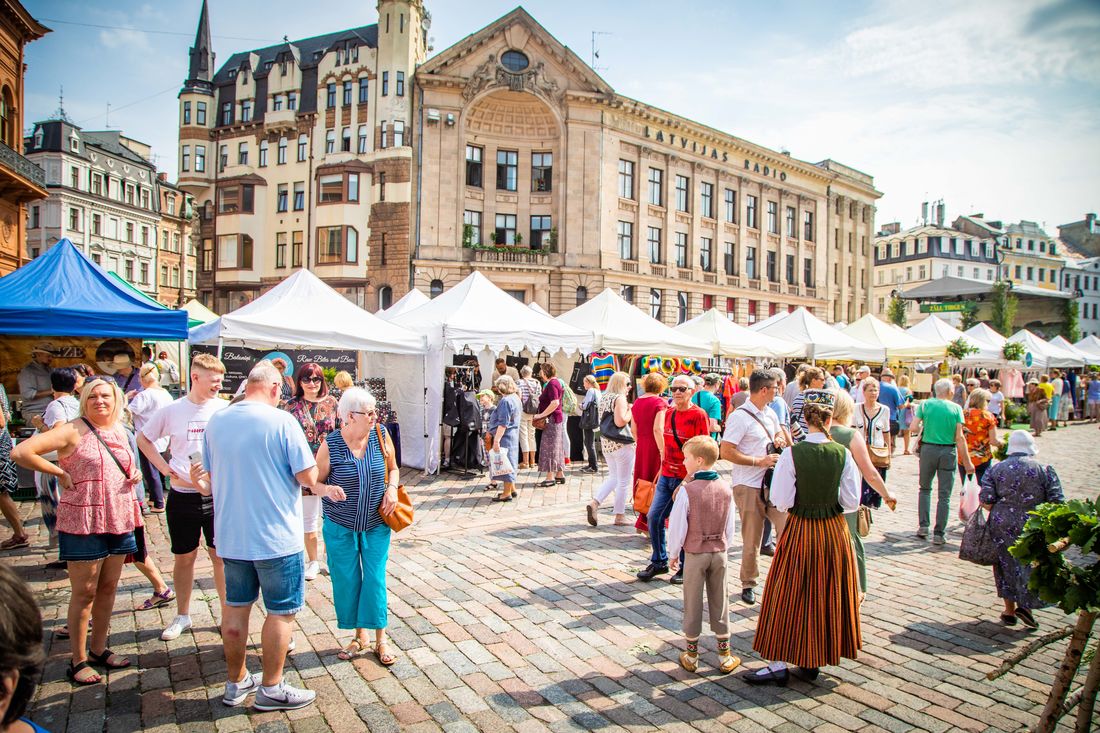 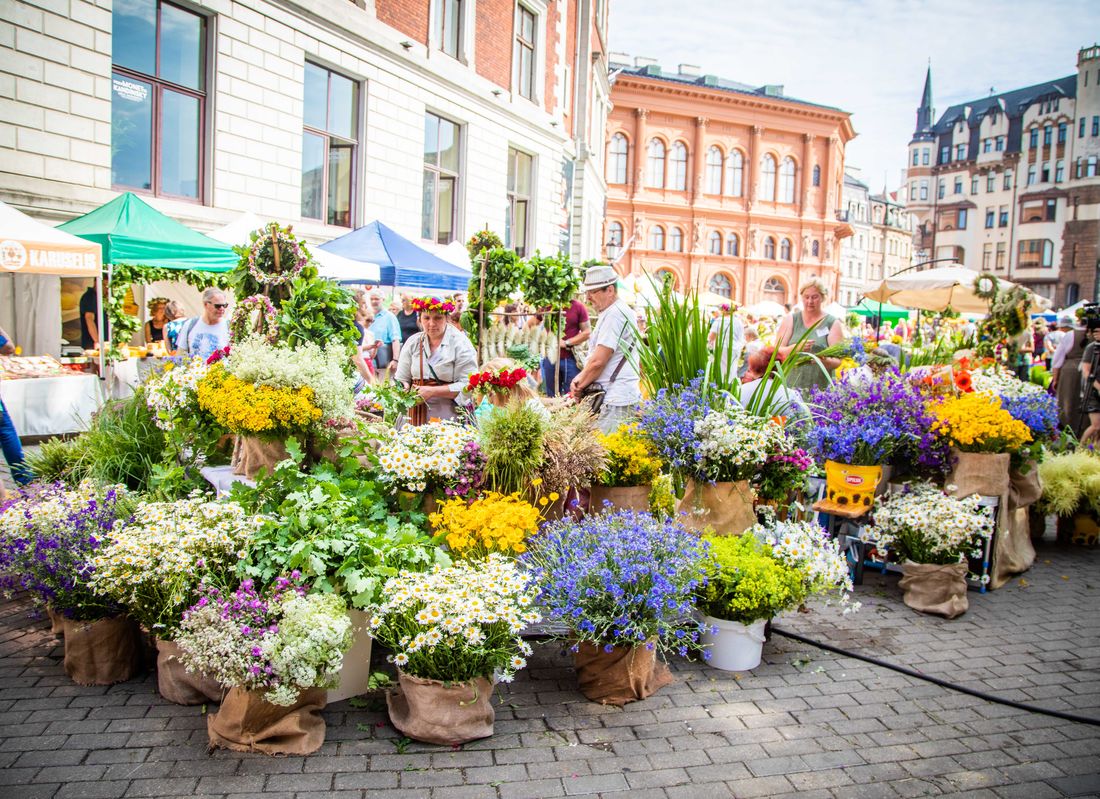 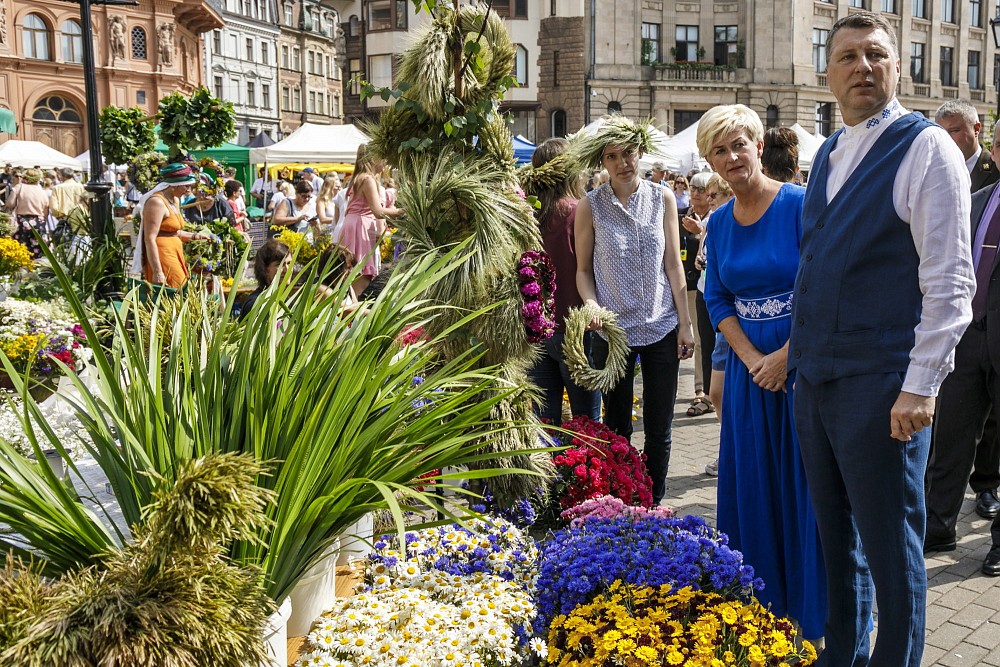 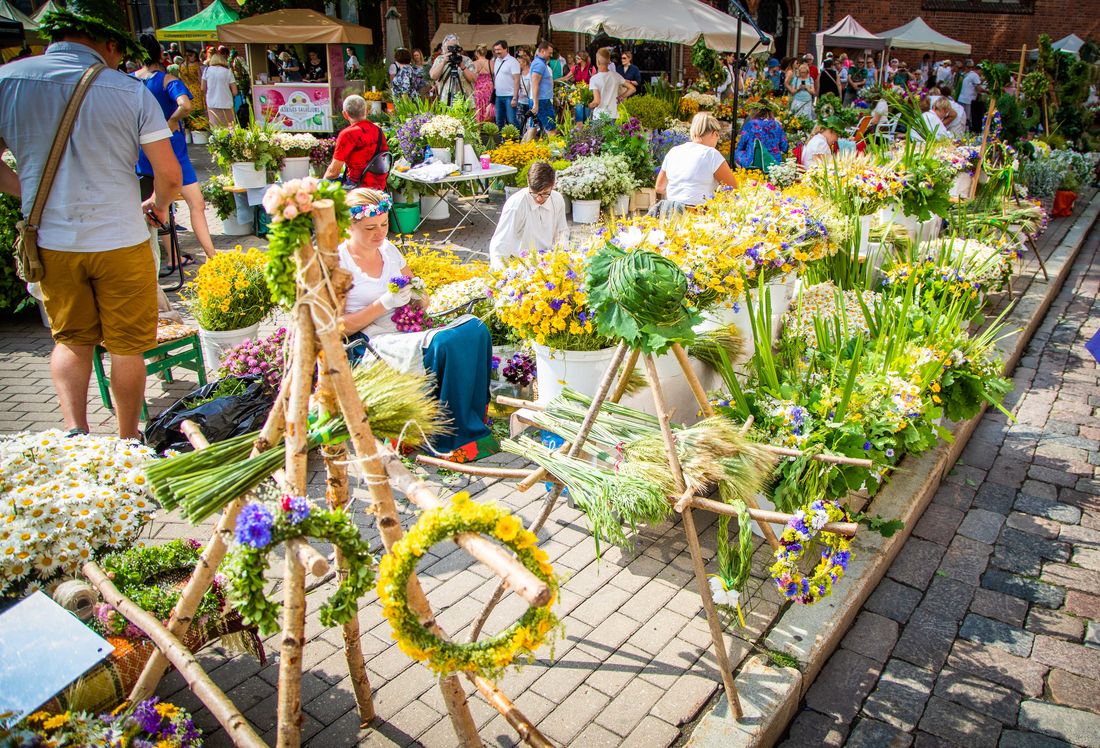 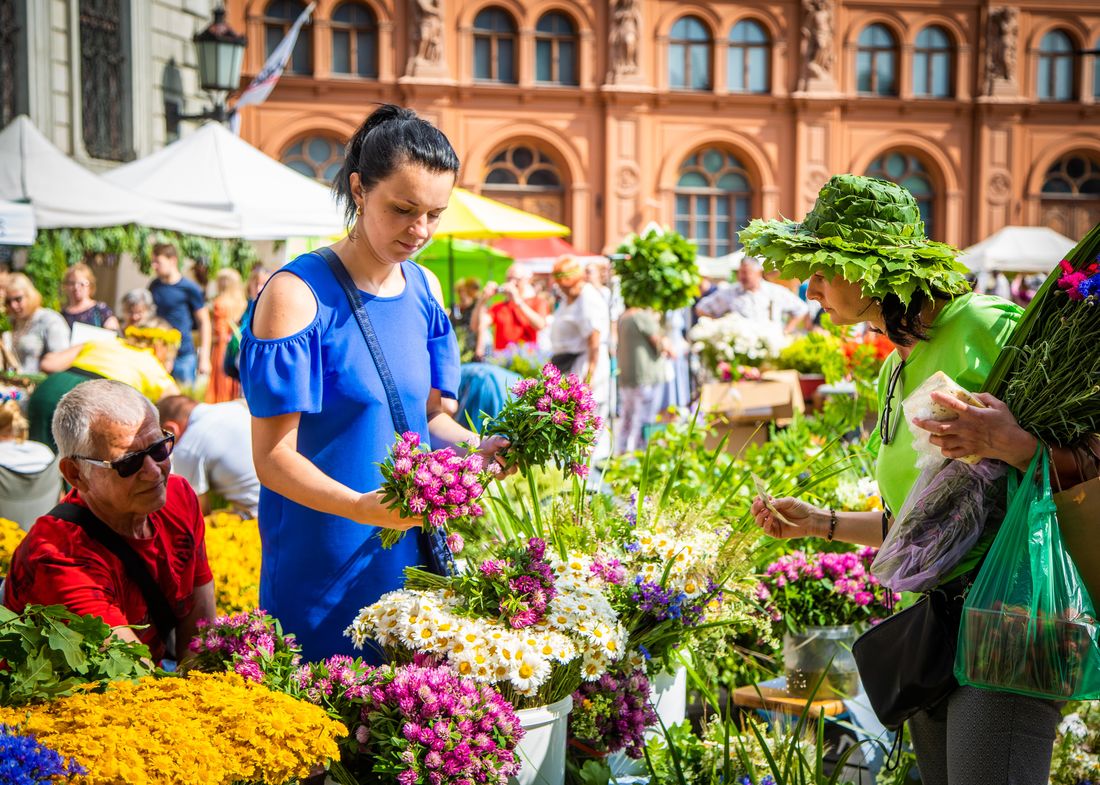 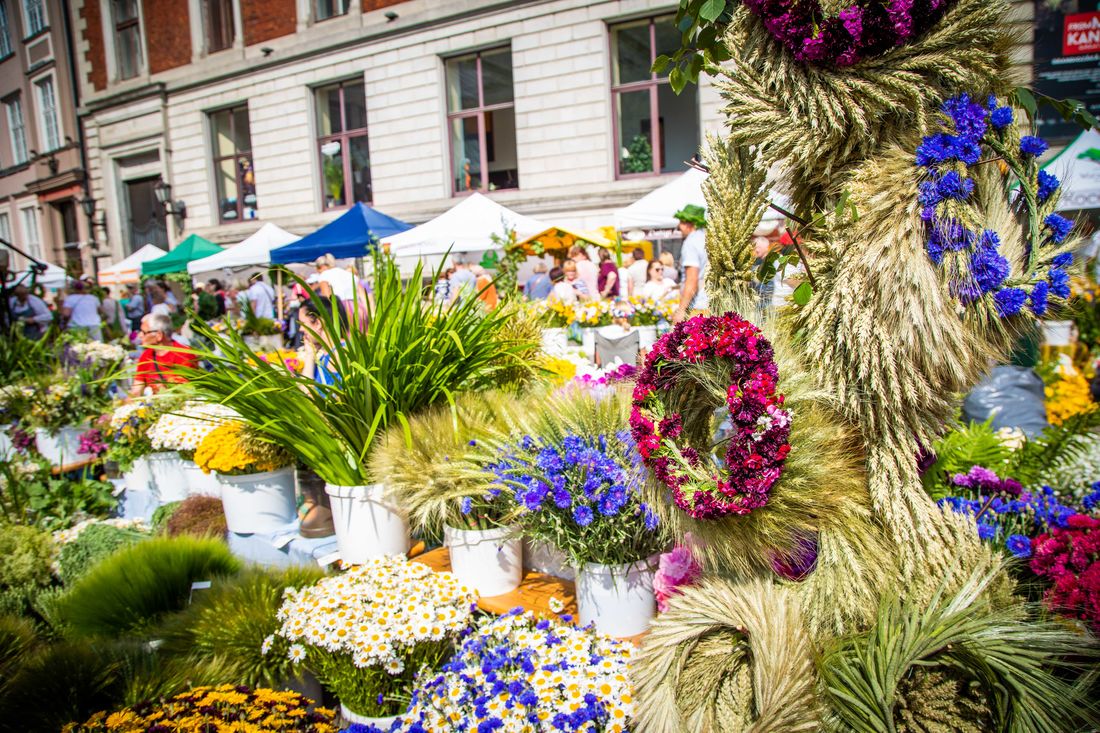 In Latvian they say “visa laba Jāņu zāle, kas zied Jāņu vakarā,” which translates as “all plants that bloom on the Jāņi evening are good decorations.” As you must have noticed from the photos, people mostly use various flowers that grow in meadows as well as oak leaves and branches. Acorus calamus plants are also commonly used. (Photos are from here.)

Markets that happen during holidays are also an opportunity to purchase various cool handmade items. 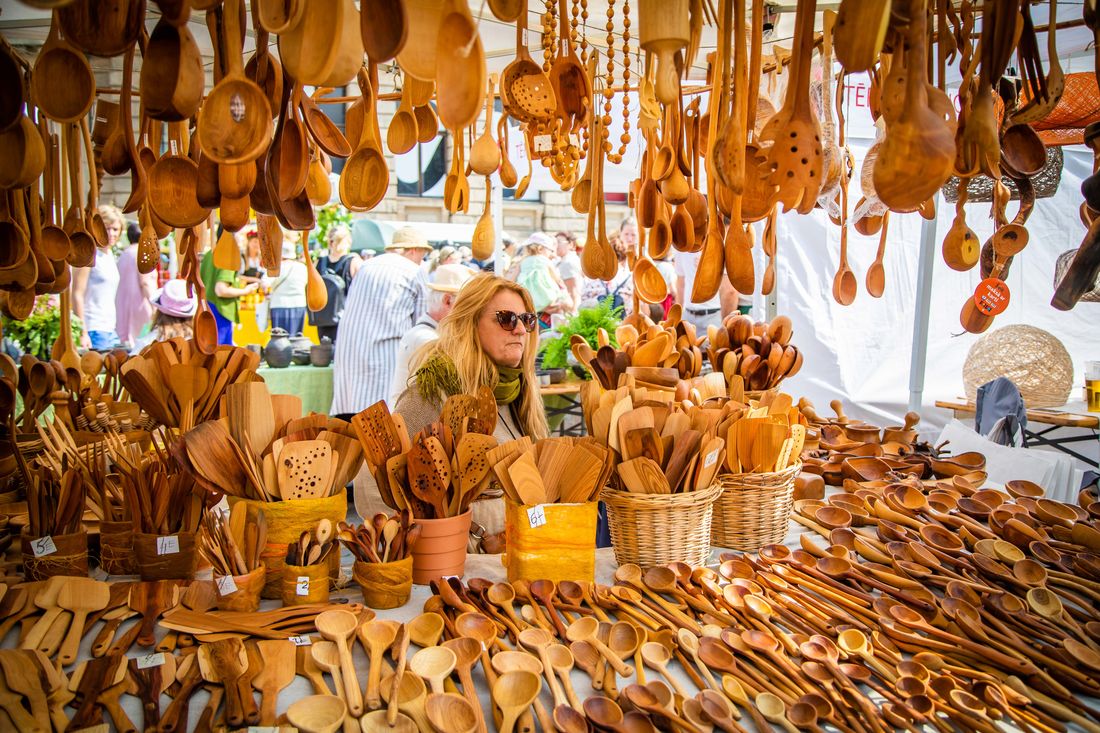 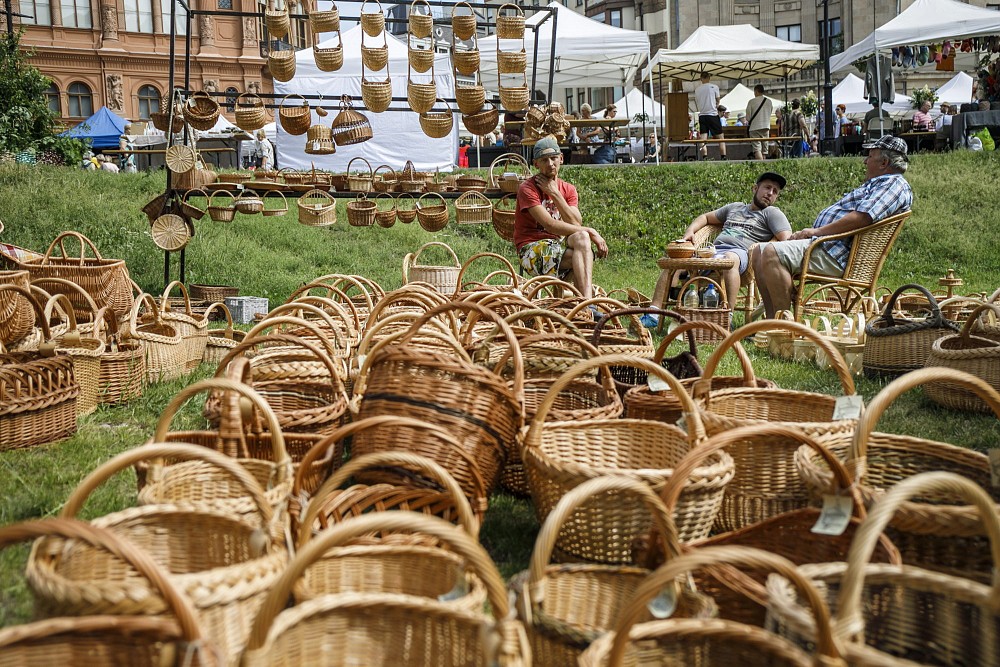 Of course, there are also foods associated with this holiday. 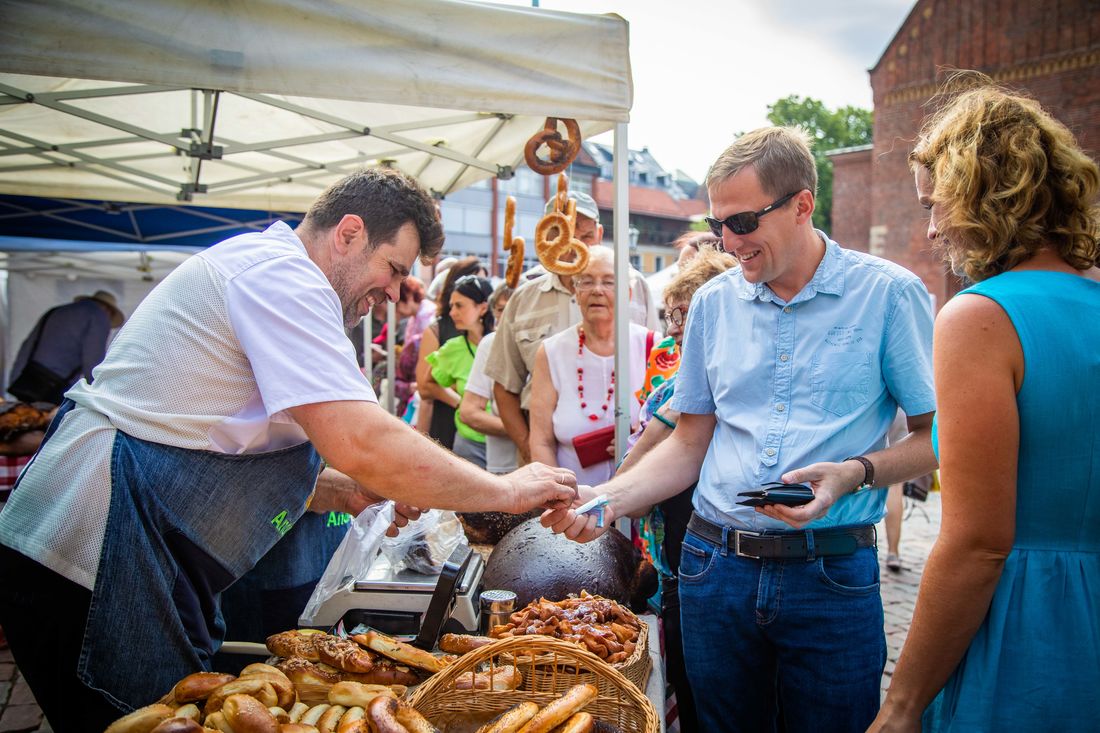 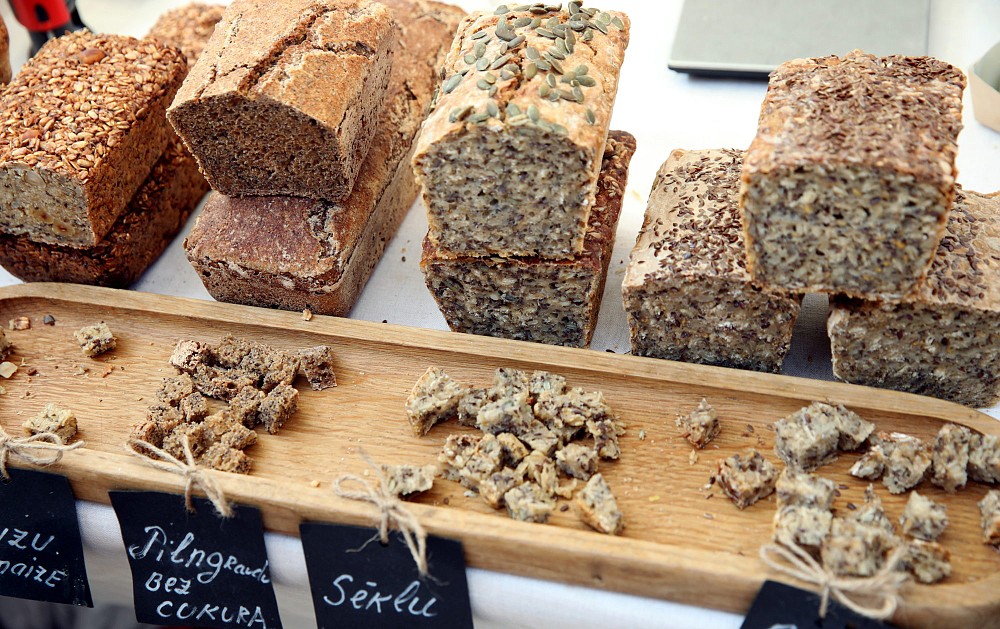 Various breads are always there for every holiday. 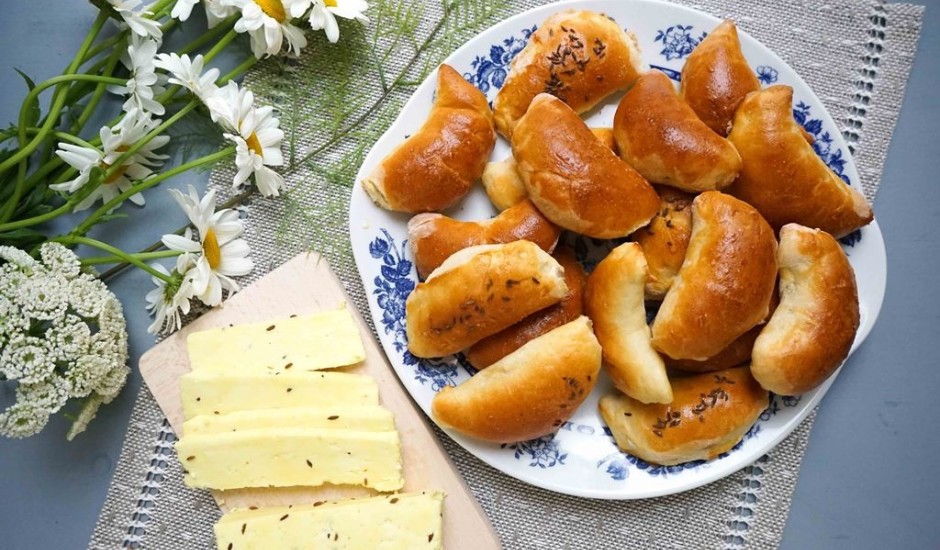 These are called speķa pīrādziņi in Latvian (meaning “fat meat pie” in diminutive form). This is the universal holiday food that people make for every single holiday out there. These are crescent-shaped baked pastries containing a filling of finely chopped bacon cubes, fatback, and onion. 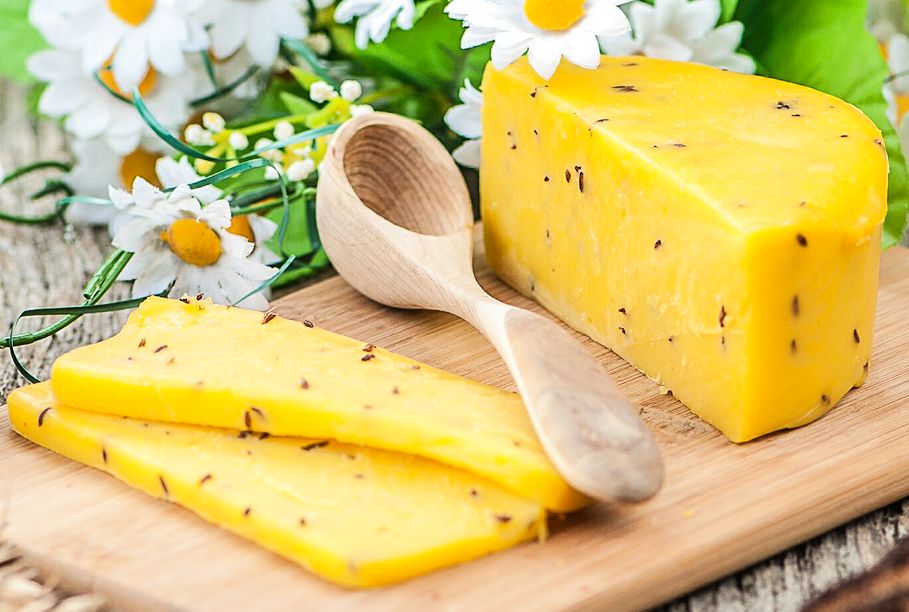 During Jāņi, people are expected to eat Jāņi cheese and drink beer. Jāņi cheese (Latvian: Jāņu siers) is a Latvian sour milk cheese, traditionally eaten on Jāņi, the Latvian celebration of the summer solstice. This cheese is soft and slightly grainy, it’s made from raw quark and fresh milk, caraway seeds being added during cooking as a spice. 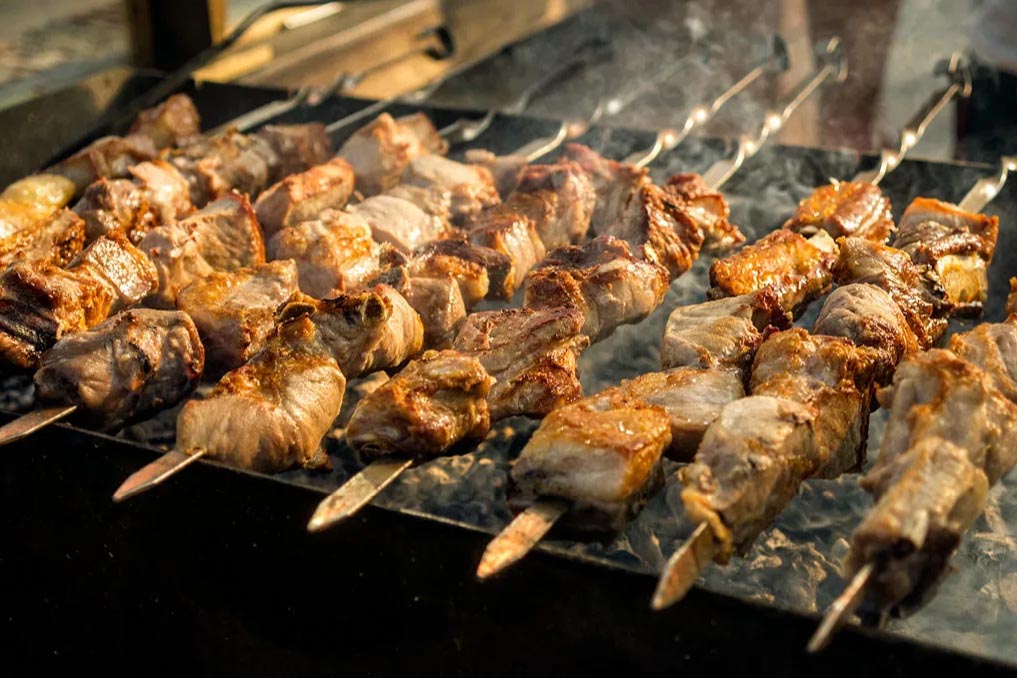 And then there’s also shashlik. This thing became a staple in Latvian cuisine relatively recently. People who prefer to celebrate Jāņi according to older pagan traditions don’t make shashlik. Those who celebrate in larger groups with huge fires don’t make it either. But pretty much everybody who celebrates at home with a small fire makes some shashlik. If you already have a small fire suitable for cooking food on it, you might as well use it for cooking some meat. (Actually, yesterday I ended up with chicken drumsticks cooked on a fire, my boyfriend’s family members preferred to cook those instead this time.)

And, of course, as with most celebrations, there’s music and dancing. Usually that means ethnic dances at this time of the year. 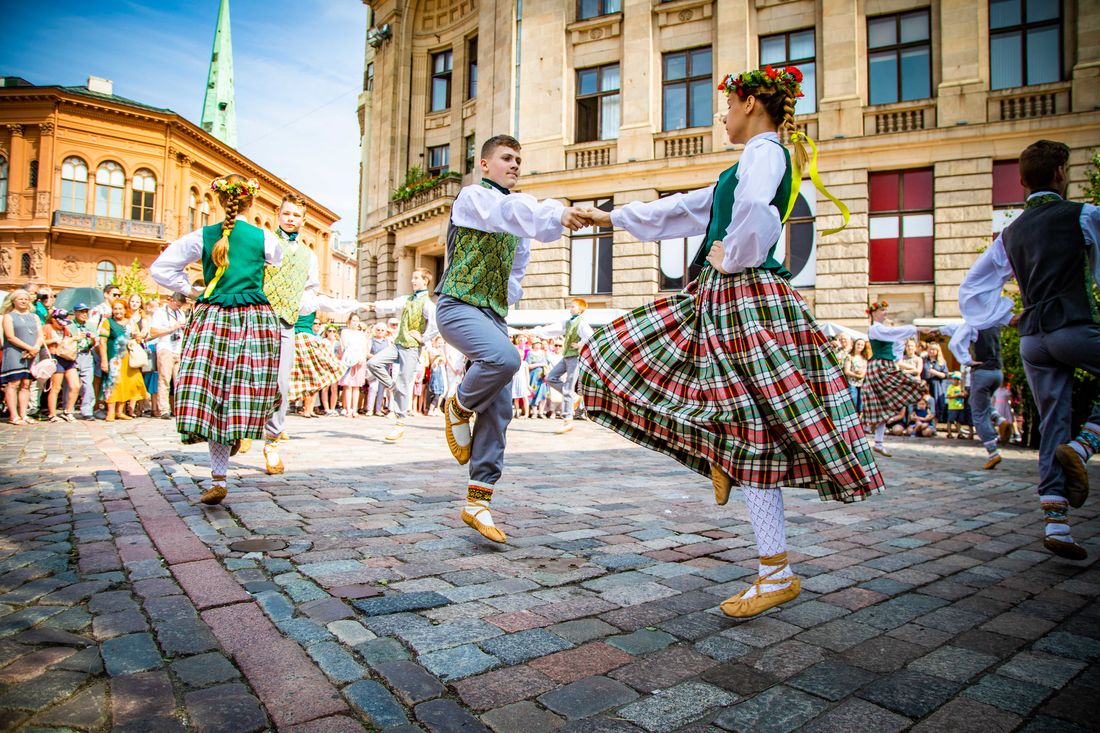 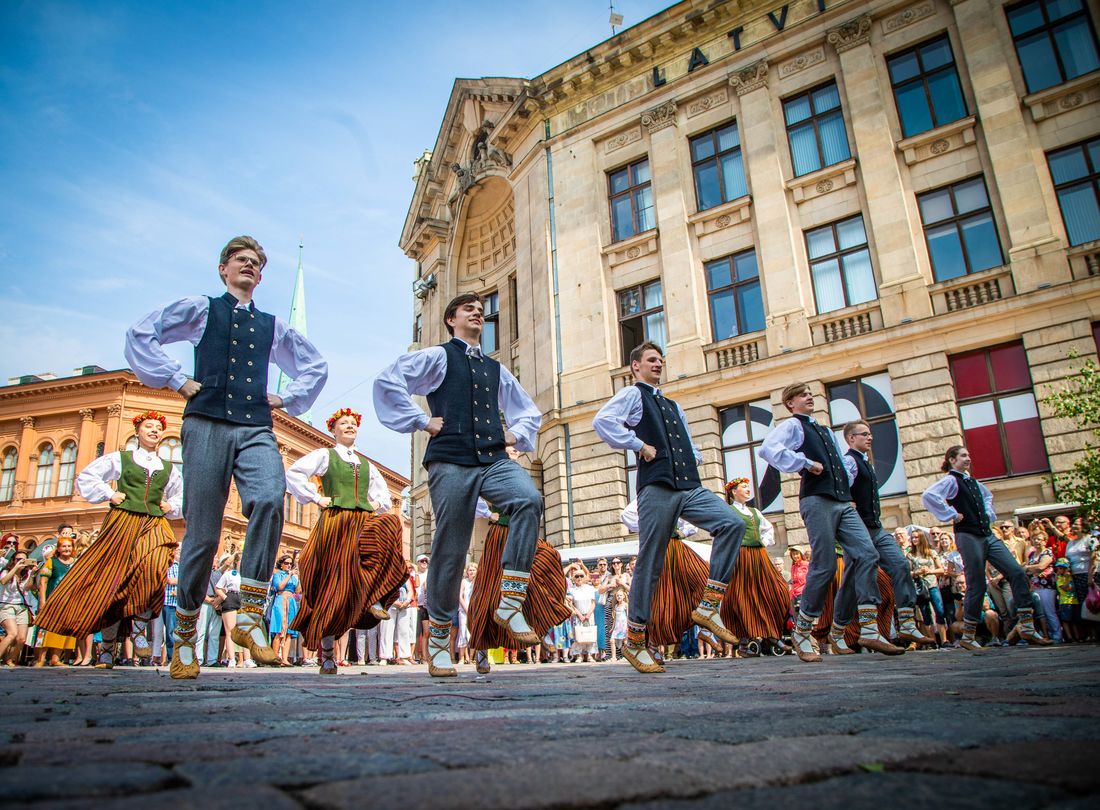 For people who are into ethnic costumes, Jāņi is an excuse to wear one. And people who like ethnic dances tend to wear Latvian traditional costumes while performing. And those look pretty cool. Moreover, there’s a huge variety of them. Every Latvian region has its own unique fashion. Here are two examples from different regions: 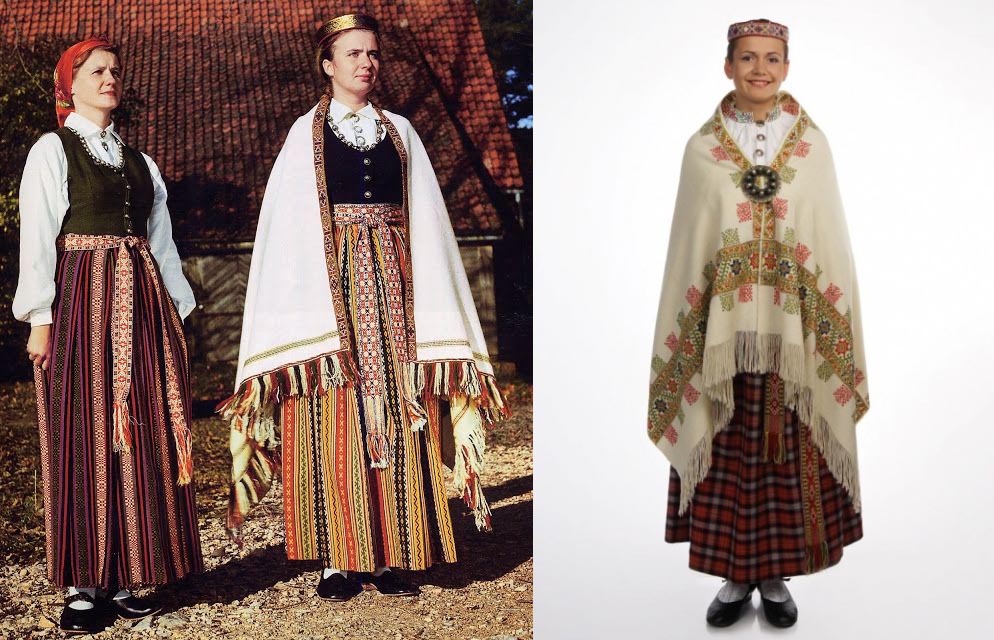 Most folk costumes people wear during holidays are based on the clothing people wore back in 19th century. But one can also pick fashion from any other time period. 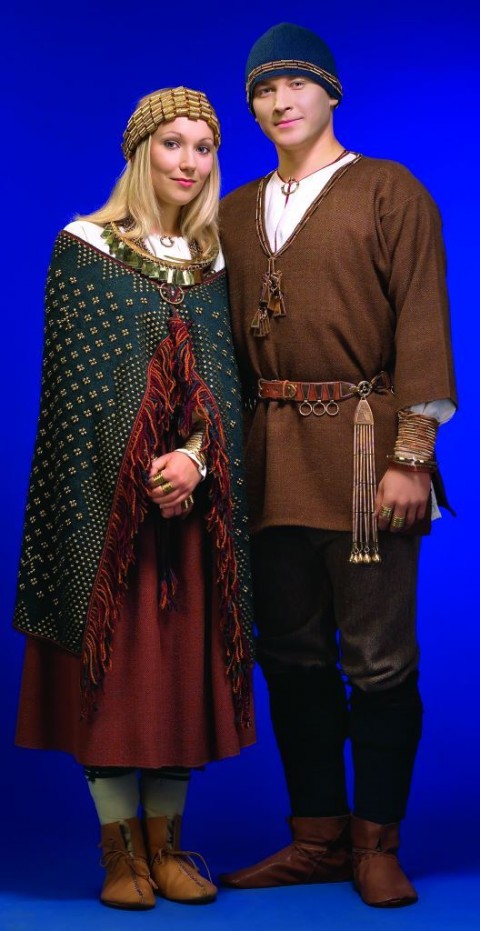 Clothing from 12th to 13th century, from Latgale region.

Another Jāņi tradition is searching for a fern flower. Back in pagan days, people actually believed that fern plants bloom on the Jāņi night, during midnight, for a short period of time. Fern flower was believed to have magical properties, whoever found one would get all their wishes fulfilled and get all kinds of other perks. Thus people went to forests and looked for a fern flower. Maybe. Or maybe they just went to have sex in the woods.

In modern days, in Latvian language “searching for a fern flower” is a euphemism for “having sex in the woods.” Personally, I have done that often enough that I’m not going to discourage anybody from looking for fern flowers, but I guess I am starting to get old—nowadays I tend to just prefer a soft and comfy bed. No mosquitoes, no ticks, and no sharp pine needles in my back are nice.

Another Jāņi tradition is wreath making. Wreaths made of flowers, grasses and oak leaves are woven and worn on the head. As you probably noticed by now from all the photos, different types of plants are used to make wreaths for males and females. Women and girls wear wreaths made from flowers, grasses and herbs. Men and boys wear wreaths made of oak leaves. In pagan days, various plants symbolized different things and there were different superstitions about them. As with most traditions, wreaths were expected to bring their wearer good fortune, health, strength, or blessings.

Now that people no longer believe all these pagan myths, we make wreaths, because they look cool and are fun to have. Here are some examples of wreaths worn by women: 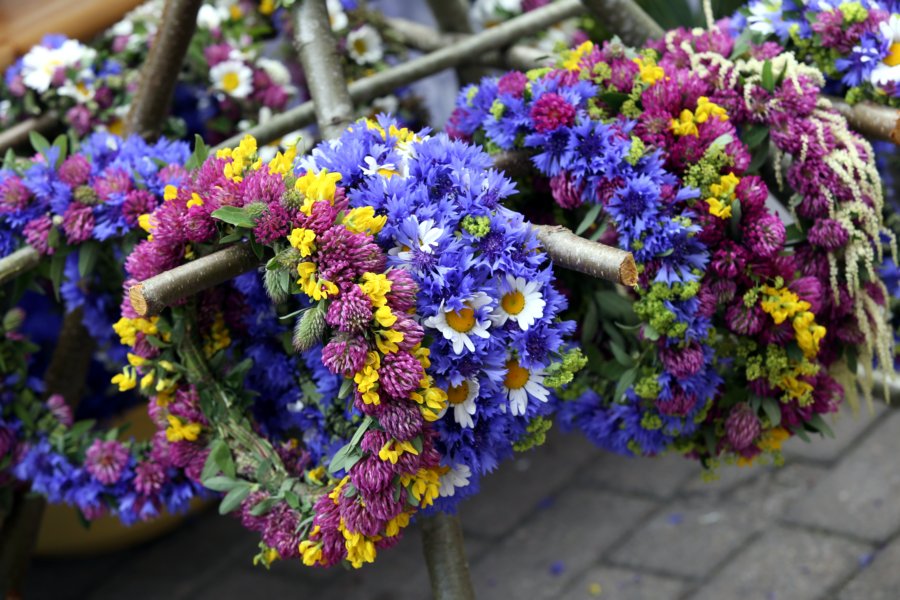 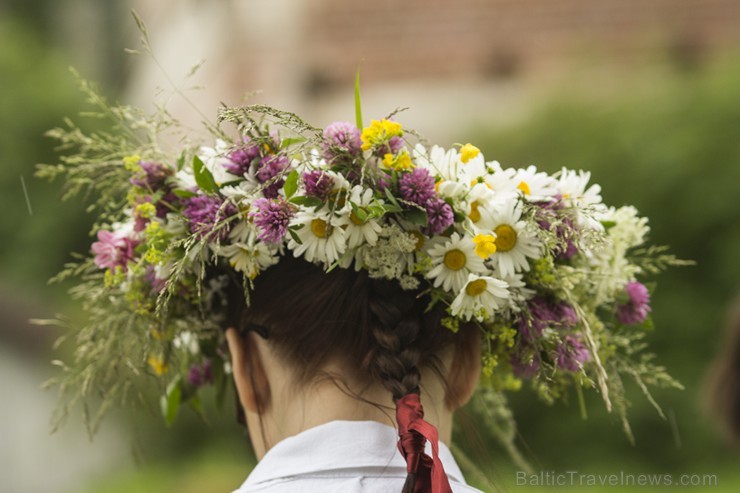 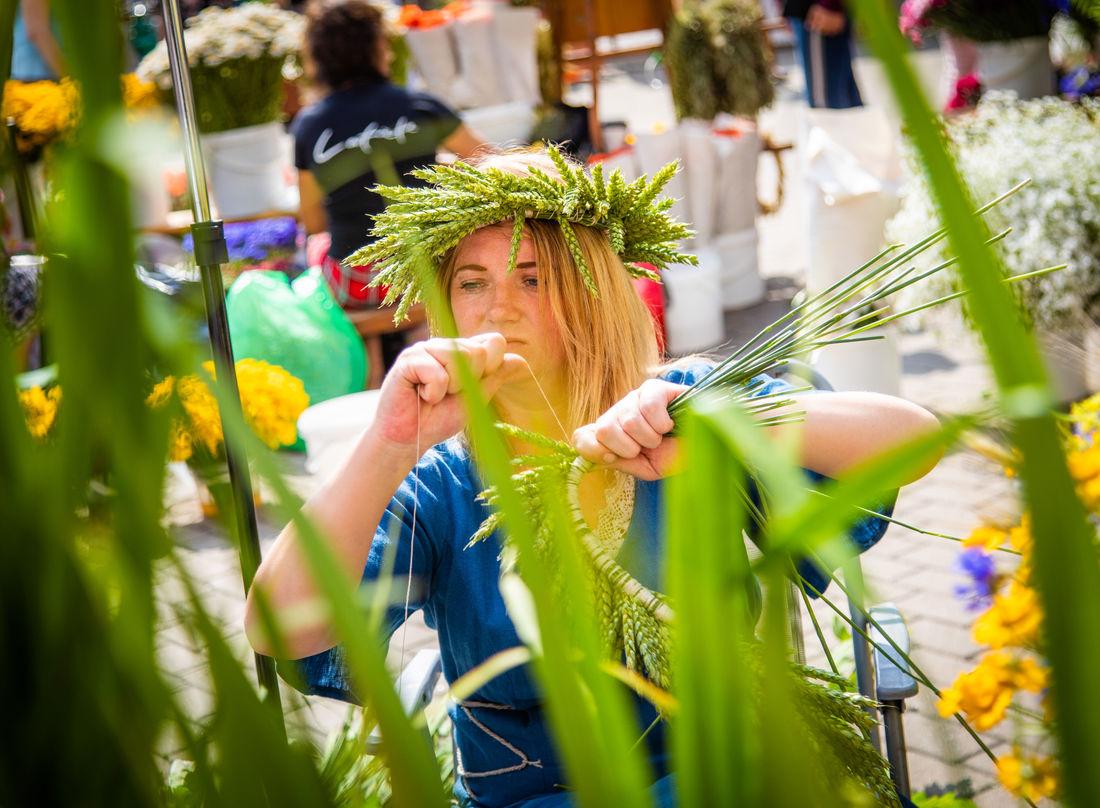 Men get oak leaves instead.

One of the nasty problems about various celebrations is that old traditions are sort of sexist, at the very least they enforce gender expectations—men are supposed to do this thing while women are supposed to do that other thing. For example, in past women were expected to cook the cheese, prepare all the pastries, weave the wreaths, decorate the home with plants. Men were expected to get drunk on beer. Sounds fair, right?

Their dress codes and expected appearance differed as well. Flower wreaths for ladies, oak leaf wreaths for men. Never mind the inherently different men’s clothes versus women’s clothes. By the way, gender roles are the main reason why I never liked Latvian folk dances. Opposite sex couples and different dance steps for men and women were the rule.

So far all the photos in this blog post were from previous years and not mine. (It’s not like you can have crowds this year due to COVID-19.) The next two photos are mine and from two days ago. This year I spent the holiday with family. We were mostly hanging out together and eating tasty foods. Jāņi cheese is great and I’ll never say “no” to speķa pīrādziņi. 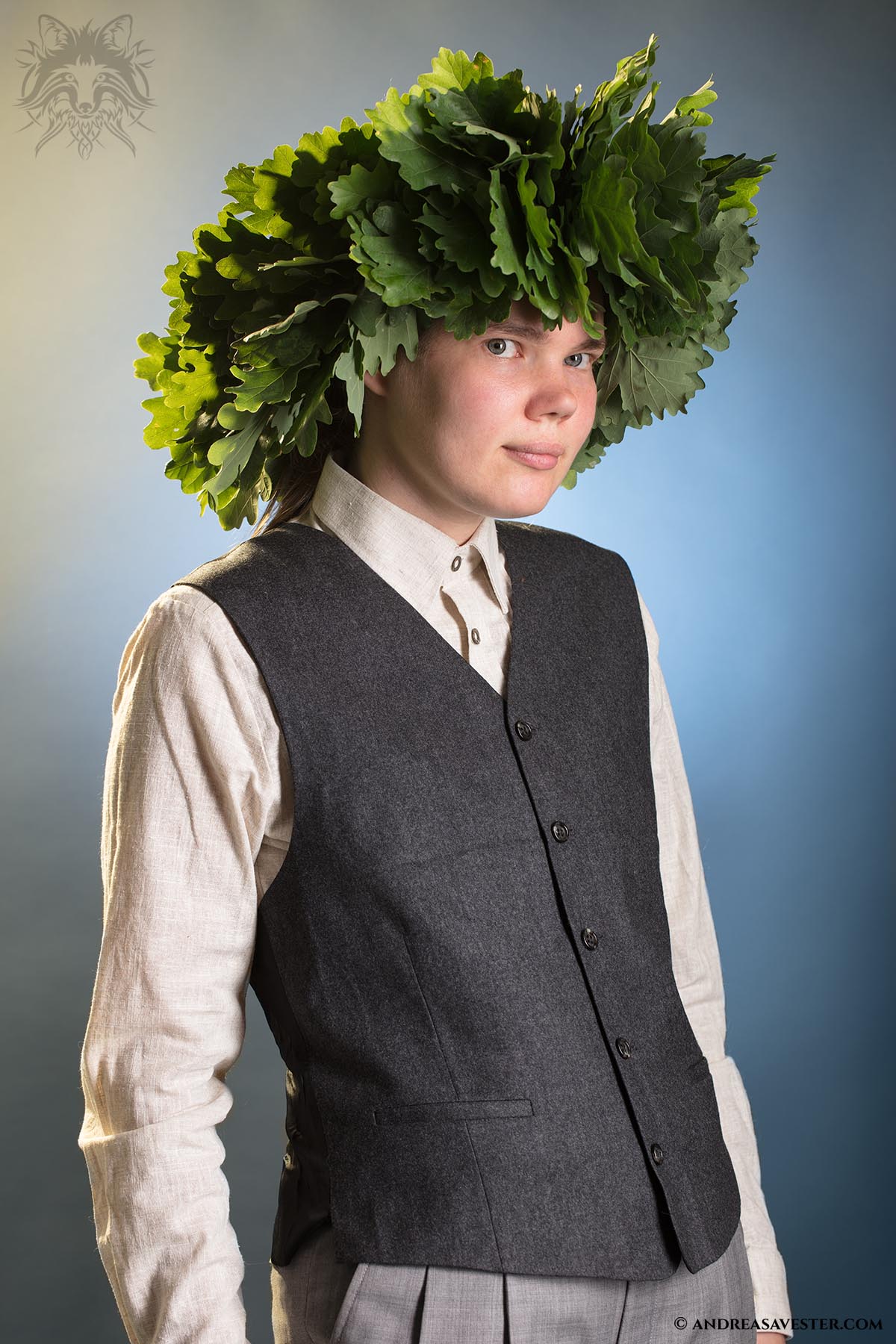 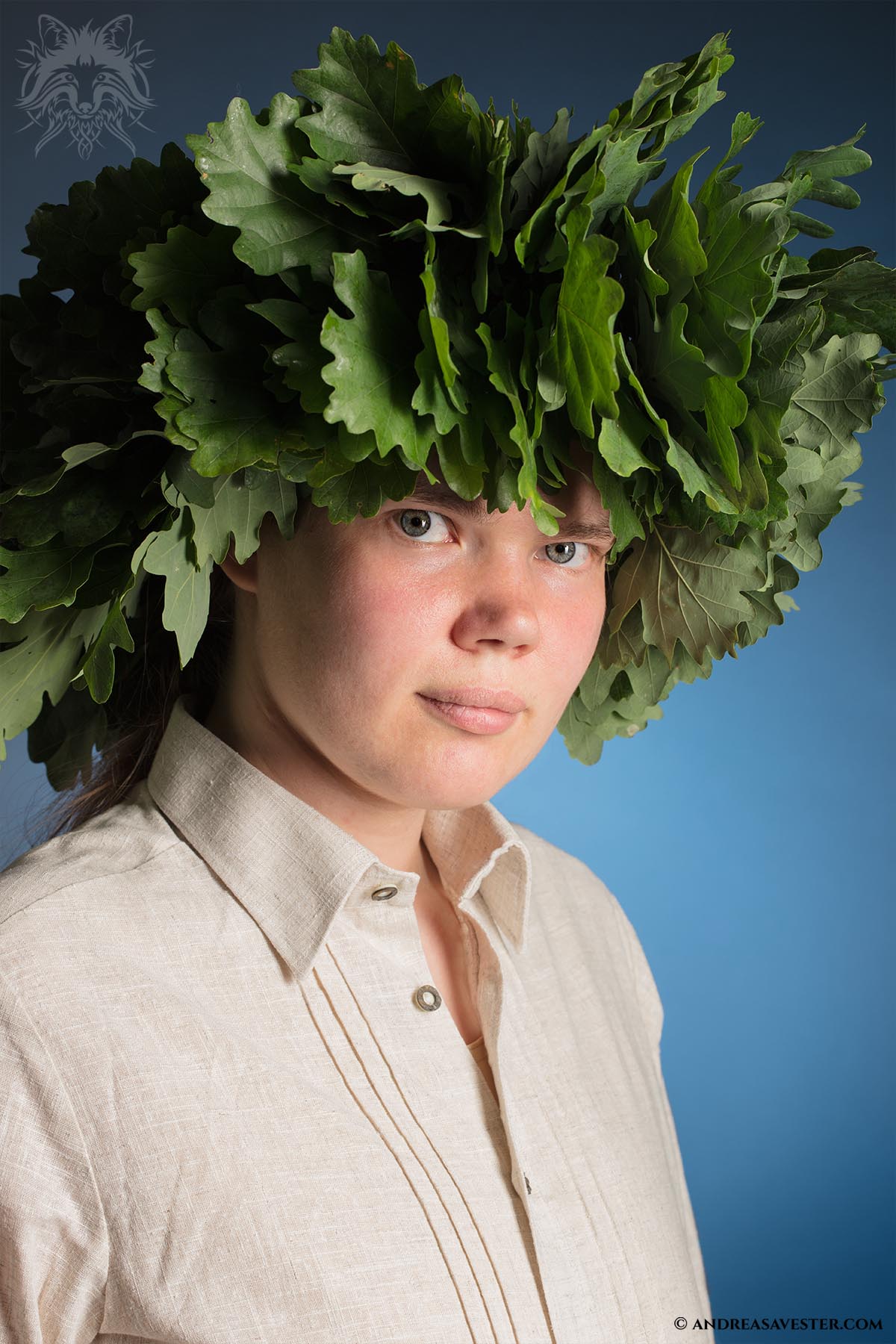 And one of the cool things about being an adult is that I can do with my appearance whatever I want, and I no longer have to listen to “helpful” adults reminding me that this or that thing isn’t for girls.

As for celebrations and old traditions, we can keep the fun parts and ditch the sexist gender expectations. There’s no reason why cheese must be cooked by female hands just like there’s no reason to enforce some dress code based on what genitalia some person has.

And some parts of the old traditions can be fun. I don’t need to believe in pagan myths to perceive burning fires or decorating my home with plants as fun and simply do it for the sake of enjoyment.