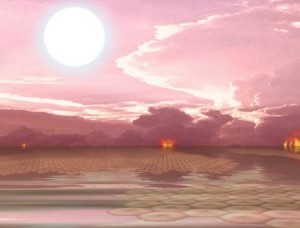 On a hypothetical simmering ocean world, under an oversized blue-white star, the tendrils of one of sci-fi writer Steven Baxter’s “Qax” reach out to the limb of another in the distance.

It’s fair to think we know life when we see it. But is that really true? Scientists have worked on defining life for decades, and in most cases they’ve ended up with a pragmatic suite a characteristics that’s both useful and clearly incomplete. With the recent focus on Mars, the effort is rejoined. Here’s one stab at it:

Faye Flam — That’s been a concern for NASA, and so in the 1990s, the space agency convened a panel to try to define life, said Steve Benner, a biologist from the Foundation for Applied Molecular Evolution(Ffame). The panel put evolution front and center: Life, the panel decided, is self-sustaining chemical system capable of Darwinian evolution. Benner said Carl Sagan had some pull on the panel. “This definition is very Saganesque.” …

Some creationists worry that the NASA panel’s definition will force scientists to ignore or cover up findings of life forms that didn’t evolve. Take the creationist website, “Uncommon Descent,” which accused me of “getting it wrong” in a previous column for mentioning NASA’s Darwinian definition without saying it’s controversial because a post-doc at Michigan State University criticized it in a blog post.

The blogging post-doc post in question proposed a “thought” experiment: “Suppose we go to another planet and find one being there, looking exactly like a human being. Everything we can measure about this being confirms that it is just as much alive as you and me. It eats, moves, heals, replenishes, communicates, feels, defecates. Learning more about this being, though, we find that it has no ancestors, and that it does not age. It does not reproduce, and it is the only such being on the planet. Thus, there is no lineage of descent and no population that can evolve. So this being is then not alive? Of course it is. This definition does not work.”

The article notes there’s a subtle semantic difference at work here, between living and life. That being said, is it a good idea to limit our definition to chemical systems that evolve?

It certainly make sense given the facts we have to work with here on earth! Maybe chemistry is the only way replicating system, using local resources to grow and reproduce, can or has developed in the universe. But should we count out other possibilities?

Here comes the power of the sun » « Mars rocks and rolls