I’m writing to you regarding the email that just dinged into my box this morning, December 31, 2014, offering me one last chance to contribute to your honorable organization, which I infer by the subject line, “Stephen, it’s your last chance!” will no longer be available for donations after today. First and foremost, thanks for thinking of me! Truth is most people don’t. As a struggling, middle-aged single man who lost my job and was then laid off in successive waves of outsourcing and downsizing right in the middle of recovering from a heart attack and corrective surgery, it’s good to know that someone is finally thinking of me and the millions of other struggling former Middle Class Americans who have generously given you their hard-earned time and money for years. END_OF_DOCUMENT_TOKEN_TO_BE_REPLACED

Last day of the year, and while every year you stay above ground cannot be called a bad year, 2014 was not a great one for me by any measure. A little older, a little broker, the world is a little bit hotter and many people are a whole lot colder. For the site, the number one search terms were all heart attack, all the time, under various phrasing. After that, Titanoboa, the monster snake came in second, a search term “859th page of the Bible,” about a supposed cancer cure in the good book rated third, atheist related and science/astronomy related searches rounded out the rest of the top five.

This FTB sub-site site served up about half a million unique hits and logged over 3000 comments from fellow atheists and skeptics. About 80 or so of those visitors kicked in donations adding up to about $400, mostly in the last few weeks during the holiday drive. My pay official payout for the year for the site was a little under $250. This is the last week I’ll ask for donations until next year — if necessary then as I pray to what false gods may be that there will be no reason to bother — so please consider sending some holiday cheer my way if you have a couple of remaining bucks to spare. END_OF_DOCUMENT_TOKEN_TO_BE_REPLACED

I’m fortunate for a lot of reasons present circumstances aside. I have my health and a few generous readers here who kicked in to my annual Holiday begfest to the tune of several hundred dollars. A couple hundred more dollars, just ten readers with 20 bucks, and I’m done for the year! This time, it’s not just me, I’m helping someone else too.

Please use the Paypal email address DarkSydoTheMoon-at-aol. Or you can use the snail-mail address 11512 Tincup #109, Austin, TX 78750 addressed to my agent G. Scanlon FBO Steven Andrew.
END_OF_DOCUMENT_TOKEN_TO_BE_REPLACED

I’m a sap for Christmas. I like most everything about it. Sure, I’m an atheist, but the lights, time off with friends and family, what Robin Williams’ character called “The Good Stuff,” in Good Will Hunting, even the rampant commercialization, what’s not to like? Where this seasonal optimism comes from is simple: no Gods needed, no magic resurrection spells cast, no special gifts received. It’s as simple as being raised in middle class America.

Below the fold is some up to date info on Santa as tracked by NORAD — another sappy tradition I treasure — and some background for new people on why I have to bleg every holiday. END_OF_DOCUMENT_TOKEN_TO_BE_REPLACED

A special Holiday, Christmas, Hanukkah, etc., thanks to all those who have helped me throughout the year with everything from gentle, corrective comments, great feedback, and a few who even sent me money! I would not be where I am without you support. My holiday bleg for your hard earned dollars is almost over. If you can spare a few Paypal bucks this week to help keep me in food and water, please consider directing them in my general godless direction at the email address Darksydothemoon-at-aol.

Don’t look here for tasty insights on the state of North Korea’s online access or broadband penetration. Last thing I read on the topic was that only a few government spooks have full web access inside that secretive nation. But via Vox, a report has appeared today at a website that does claim such expertise and it states something looks to be afoot:

NoKoTech — I haven’t seen such a steady beat of routing instability and outages in KP before,” said Doug Madory, director of Internet analysis at Dyn Research. “Usually there are isolated blips, not continuous connectivity problems. I wouldn’t be surprised if they are absorbing some sort of attack presently.”

That certainly sounds like a proportional response. Or an attempt at one. Apparently, NoKo does have some Internet including official webpages and the like as part of their pitiful PR campaign, word is their access routes in and out through China.  Although how “crippling” even a total nationwide denial of service could be in such a backward country is hard to gauge. North Korean webpages are about as convincing to the outside world as a Potemkin Village.

I certainly want it to be true, because those assholes deserve it, richly, with piping hot dressing and a cherry on top all day long. But this report could also be complete bunk or it could just be a minor, unorganized event thrown together by friendly hackers fooling around with too much time on their hands and a sense of payback. I’ll update the post if we get more details from wherever or any kind of official information.

Update: NYT also reporting likely attack; Yahoo News; Vox has an update on how the Internet works in NoKo and its fascinating; Twitter hashtag #NorthKorea

Update 12/23: It came back up breifly over the wee hours and is now down again. My guess would be this is more like an Anonymous hack, or a group sympathetic to them. But unless State dept or the WH confirms it was gov’t orchestrated, we will never know for sure.

Some meta-news, I have a new job starting this week and the hilarious thing is, since it’s the holidays, I get a bunch of days off over the next two weeks. It’s a grassroots environmental activism role that pays mediocre. But at least a lot of it is outside, healthy work, with like-minded mostly, young idealistic progressives. I don’t get my first partial check until mid January, so pleeease consider a small holiday donation to Paypal at the email darksydothemoon-at-aol. Thanks!

Today is the December solstice, the shortest day of the year in the northern hemisphere and the longest day down under. But it’s not the earliest sunset or latest sunrise in the north. How could that be? Follow below the fold for a visual explanation. END_OF_DOCUMENT_TOKEN_TO_BE_REPLACED 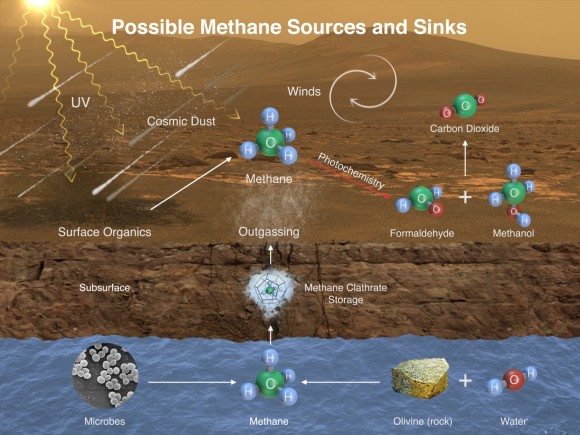 Two possible ways methane might be added and removed from to Mars’ atmosphere. NASA’s Curiosity Mars rover has detected fluctuations in methane concentration in the atmosphere, implying both types of activity occur on modern Mars. A longer caption discusses which are sources and which are sinks. (Image Credit: NASA/JPL-Caltech/SAM-GSFC/Univ. of Michigan)

Curiosity phones home with some interesting news on Mars that has some scientists scratching their heads: it detected methane. The substance is common in the outer solar system, but the methane detected on Mars came in “whiffs,” apparently from the ground. And while that’s not a smoking gun for life, it is consistent with the kind of microbes that might theoretically eek out a living under the cold, dry surface of the red planet in spots thought to be warmer and wetter: END_OF_DOCUMENT_TOKEN_TO_BE_REPLACED

Who could’ve predicted Sony would get hacked? Answer: EVERYBODY. They’ve been hacked in the past and so have a lot of other large companies, this is nothing really new outside of the successful blackmail part. There are a lot of reasons why corp IT security is so easy to breach. But a big part of the blame lies with stingy mega-corporations and senior management, who got lazy and greedy, used to getting expertise on the cheap during the recession, and are not adjusting well to the recovery. For my part I can attest that network admins are often outsourced to the cheapest third-party provider a company can find. Even in the US these skilled employees often start as low as $12/hour with no benefits, pure temp pay. That’s for a pretty complicated job where you also have to work nights and all holidays.

So newsflash to the S&P 500: you get what you pay for and you are not paying anywhere near enough. Companies managed to slide by since 2008 because IT employees were desperate like everyone else, they’re not as desperate anymore and unemployment is probably going to get better, which means this situation will get worse. Because if there’s one thing you can count when it comes to post recession corporations, mid level execs will keep reassuring one another and gawking at the senor exec/emperor’s new clothes as long as their direct deposits arrive on time and in full. Sadly, it’s going to take more than this to change that entrenched sense of entitlement to other people’s smarts and sweat.

Speaking of employment, I actually have a new job starting soon. And it’s not in tech support, but won’t get paid for a few weeks and the pay is mediocre anyway. Any holiday contribs you can throw my way are appreciated. Paypal email address is darksydothemoon-at-aol. Thanks again!

One of the other things I’ve been busy with the past few days is helping a dear, old friend who was struck with cancer exactly a year ago. She was given a fifty-fifty chance of surviving a year and a much lower chance of living any longer than that. I’m sure many readers here have been privy to the harsh, roller-coaster ride that is a cancer patient’s life. And while no cancer is good, this one was about as bad as it gets: aggressive glioblastoma, better known as brain cancer. After round after round of chemo and radiation, multiple issues with meds causing horrible side effects, and four separate invasive brain surgeries requiring months in the hospital, she was literally death’s door more than once. But the tumor shrank dramatically, encapsulated and shows no sign of metastasizing. It’s now an inert bag of tissue the size of cherry with no blood flow in or out as best the docs can tell. In short, she may well turn out to be among the lucky five to 10 percent of patients who survive this deadly form of the disease. But it still came at a terrific price. END_OF_DOCUMENT_TOKEN_TO_BE_REPLACED

I’ve had a couple of job interviews the last few days keeping me busy. The job market has noticeably improved. I can’t quite pick and choose among plum jobs, but there are offers on the table starting as early as Jan 5, 2015, for stuff that will keep the lights on and none too soon. In the meantime, I thank those of you who found the generosity and holiday spirit — despite your purportedly cold, immoral atheist hearts — to send some paypal or snail mail bucks my way. If you haven’t yet contributed and are able to, the blog bucks I receive from the annual Christmas bleg are vital to the continued operation of this site and my ability to stay in the lifestyle in which I have become accustomed, i.e., food, water, and Internet. My Paypal email is Darksydothemoon-at-at AOL, thanks!

While that was going on we had a blockbuster and, in the opinion of many, long overdue development yesterday afternoon. Technically overseas but in reality closer than most US cities in neighboring states are to each other. Working behind the scenes with Pope Francis, the Obama administration secured the release of several American prisoners in Cuba and that’s just the tip of the iceberg: END_OF_DOCUMENT_TOKEN_TO_BE_REPLACED