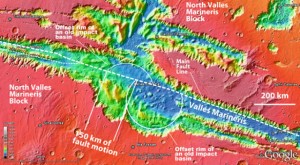 There’s a bit of a lively debate in geology about tectonic plates and how rare or common they may be. Since earth is the only planet we’ve studied in-depth, the winners of that debate are yet to be announced. But one geophysicist has found evidence for nascent plate tectonics on a certain nearby world, and the evidence was there all along:

io-9 — Some had merely suggested that it was a “big crack” that had just opened up. But Yin’s work shows that Valles Marineris is in fact part of a plate boundary, one that’s subject to slow, but persistent horizontal motion; the two plates have moved about 93 miles relative to each other. He compares it to Earth’s Dead Sea fault system, a trough-like structure that is also moving horizontally. The finding indicates that Mars may be subject to earthquakes, or what should be more appropriately referred to as marsquakes.

The analysis also suggests that Mars’s tectonic activities are excruciatingly slow, with major tectonic shifts occurring about every million years or so. Yin suspects that Mars is subject to a different kind of plate tectonics — one that may be the result of the planet just having two plates, as contrasted with Earth’s seven. Yin’s study can be found at the journal Lithosophere.

We’re not even sure how common plate tectonics are on terrestrial worlds, let alone what strange versions may pop up on moon planets and super earths. There is speculation that Venus may have once been festooned with plates and even vast, warm oceans to help lubricate them. Maybe when the oceans evaporated the tectonic machinery seized up, heat built up inside until magma burst through all over and covered the planet — that would explain some things about the surface geo of Venus, but without more data and a lot of it, it’s just a guess really.

There is a school of thought that our tectonic plates were in a sense freed, opened up like pieces of a puzzle able to slide freely after a few other few pieces are removed, when hunks of our mantle went sailing into orbit around the Hadean earth and formed the moon. And there’s a good argument to be made that without those easily moving tectonic items on earth, there would be no continents today.  That early on in our history the plates collided, like they do today, and piled up rock and earth at their boundaries, like they do today, and over time those aggregations themselves joined up forming the spine of the first dry land outside of ephemeral volcanic islands. Without plates and the geophysical events that come along, the earth might be an ocena planet, with an occasional eroding rocky crag standing above the waves. We’d all be fish or corals or, in PZ’s world of course, very sexy and smart cephalopods!

But without having at least one other planet to test some of this stuff on, we’re limited to computer models and our imagination. So it’s cool for the geosciences that Mars has plates, plus it makes an alien world a tiny little bit more like home.