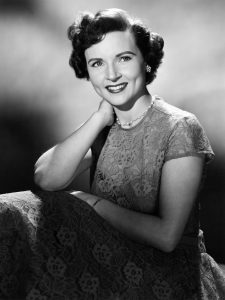 Well, that’s it. The end of the world has arrived. 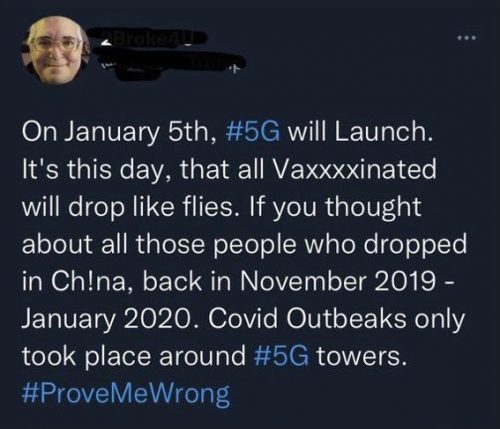 If you’re bored and feel like exploring all of life, try the One Zoom explorer. It’s a graphical interface to a collection of data about phylogeny. 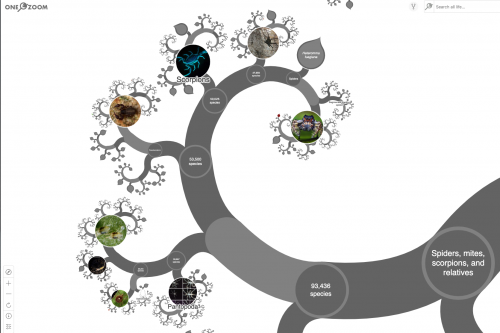 It’s interesting and useful at the top level, but as you dig down into the twigs and leaves, it starts to fall apart, lacking in detail. That’s what you’d expect if you’re trying to track about 1.5 million documented species (somewhere over 10 million species total). It does help communicate the diversity and complexity of life, though.

Let’s look at vaccination rates for every county in the US against the percentage that voted for Trump, shall we? 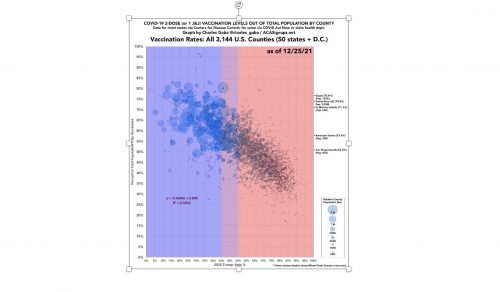 That’s his legacy, ignorance and death.

A lot of presidents in every party can claim to have left a legacy of death, but this is a stunning anti-accomplishment that might only be rivaled by Ronald Reagan and W.

You better join us for our livestream this afternoon, because we’ve lined up an all-star cast. Aron Ra! Dark Lilith! Emma Thorne! GonnaGoForIt! The only person not invited is Kent Hovind, I think.

Good news: Ghislaine Maxwell was found guilty. I think we can also consider this a conviction for Jeffrey Epstein, since there has to be a child rapist to receive delivery from a child trafficker.

Ghislaine Maxwell, the longtime paramour of financier Jeffrey Epstein, was convicted on sex-trafficking charges after a trial that centered on what types of enabling conduct — including befriending young girls and teaching and scheduling them to massage an older man — should be considered criminal.

Maxwell, 60, was accused of recruiting teenage girls to massage Epstein at his homes in Palm Beach, Fla., New York, New Mexico and elsewhere between 1994 and 2004.

Epstein allegedly paid the girls hundreds of dollars in cash for the massages, which involved sexual touching and which he expected three times a day. He died by suicide 28 months ago, while awaiting his own trial.

Also, though, I must ask what has happened to the BBC? They asked Alan Dershowitz to provide commentary on the verdict.

After Ghislaine Maxwell was found guilty Wednesday on five of six sex trafficking counts for her role in procuring young girls for her former boyfriend and serial sex offender Jeffrey Epstein to abuse, BBC News took to the airwaves to analyze the proceedings. And they brought on Alan Dershowitz, notably named by Epstein accuser Virginia Giuffre as one of the men (she has also claimed Prince Andrew sexually assaulted her) she said Epstein and Maxwell allegedly forced her to have sex with repeatedly when she was underage. Dershowitz has denied the allegations.

Big day of remembrance and reflection for all our heroes of Science and Rationality. pic.twitter.com/eZNX0cnPQp

Maybe the BBC should convene a round table conversation with Pinker, Krauss, Dawkins, Summers, etc. to sadly discuss the fate of their old friends. 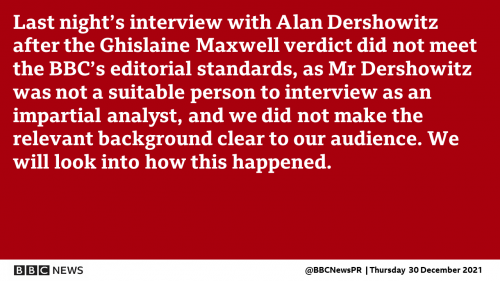 Come on, every news service. Scratch Alan Dershowitz off your invitation lists already, just like all those scientists should have automatically shunned Jeffrey Epstein.

I cannot resist. Tomorrow (30 December) at 1pm Central, I’ll be hosting a livestream to laugh at Kent Hovind. It might just be an hour of belly laughs.

As I predicted, Kent Hovind & Matt Powell were so stung by Emma Thorne’s video that she’s the subject of their “wack-an-atheist” video tonight.

What’s most hilarious, though, is that they’ve been flailing about for 20 minutes now, and their audio is totally fucked up. It’s unintelligible. Both Powell and Hovind are sitting there, and they haven’t once looked at their audience’s chat, where everyone is yelling at them to fix the audio.

Amazing. He’s done now. He streamed for 42 minutes and never once noticed all his fans screaming at him in the chat that the audio was broken.

Most of you missed it (lucky you), but we do have YouTube’s automated transcript of the whole show. It only includes the words the machine could make out, so it’s a bit…abbreviated. Savor the one time Kent Hovind made sense.

One of Oprah’s greatest crimes was promoting that horrible opportunist, Dr Oz, and turning him into a celebrity quack. Here’s a good expose of how awful Oz is.

Dr. Oz became an Oprah regular, and when The Dr. Oz Show premiered, it took off. He fit in easily among the celebrities in his new social stratum and now counts among his friends everyone from hedge-fund billionaire Ray Dalio (who did not wish to discuss their relationship with me) to Brooke Shields (who did not respond to a text seeking comment) and Martha Stewart (who said she couldn’t talk owing to her “busy year-end schedule”). And then Dr. Oz seemed to change.

“He’s one of those public figures who really haunt me,” Frank Bruni of the New York Times said. Bruni met Dr. Oz when he wrote about him in 2010 for The New York Times Magazine. Bruni spent weeks observing his subject, work that required him to experience for himself the incongruity of Dr. Oz’s dual existence. One day, he was in an operating room, peering into the open chest cavity of a patient as Dr. Oz stitched around her heart. The next, he was hanging out at a studio as Dr. Oz and his producers discussed a plan to create prop body parts to hand out to the audience at a taping of The Dr. Oz Show.

During the process, Bruni said, “two things came into equally vivid relief: This is a man who is or was a serious doctor. Seriously trained. Seriously talented. Gifted. And with a record of performance in which he contributed an enormous amount to humanity. But at the same time, I’m sitting in on these story meetings where they’re talking about ‘Does cotton or Silly Putty or something else better stand in for testicles?’ I mean, how do you go from A to B? Why does he seem more excited about the fake testicles than the open-heart surgery? The answer is because the latter was the route to fame and riches — and that’s the Faustian bargain.” That observation was not just some convenient mythic device, Bruni said, but his honest conclusion about a subject he’d thought hard about for more than a decade. “I’ve met and profiled very few if any people who so embody the wages of ambition.” In this allegory, the Devil gave the doctor wealth and fame in exchange for his reputation.

“Somewhere, I’m not sure how, he started to sell out — it happens to a lot of people when they get money and success; they want more money and more success. He went from doctor to entertainer to scam artist,” a veteran daytime producer said. “Dr. Oz is dangerous because he believes he’s got some divine power.”

The author’s conclusion is a little worrisome. Oz has a chance of winning, but he’s facing opposition from the far-right MAGA crowd. He may not be nuts enough to win! Is that a good thing, or a bad thing?