Don’t just bolt it down! Chew it until there’s no doubting it’s dead. Especially if it’s an octopus.

Stephens says that the 4.6-pound cephalopod appeared to have grabbed onto Gilligan’s larynx with a tentacle, preventing it from reconnecting to the dolphin’s breathing apparatus and effectively suffocating him to death.

“That octopus might have been, in theory, dead, but the sucker was still functional,” Stephens says, adding that while nobody wins in a situation like this, “the octopus gets a bit of a last hurrah.”

What a horrible way to go — not only choking to death, but getting your post mortem photo plastered on websites as an example of gluttony. Or being murdered by a mammal, and having your arms shown dangling from its mouth. 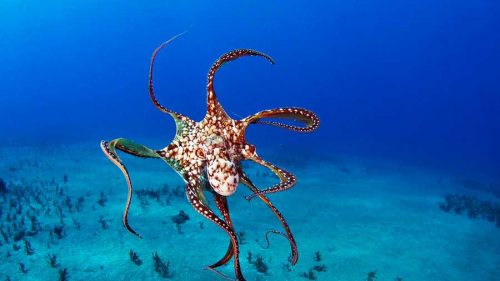 I might have to be a bit less lithe than that show-off, though.

It’s the hot new parenting fad: glue all your babies to your cape and carry them with you everywhere.

Pelagic parenting 101 🦑📚
⁠
Some deep-sea squids, like Bathyteuthis berryi, store and brood hundreds of thousands of fertilized eggs in specialized egg sacs, guarding their young and protecting them for up to nine months until they hatch.

Definitely should have a featured role in a Bladerunner movie. 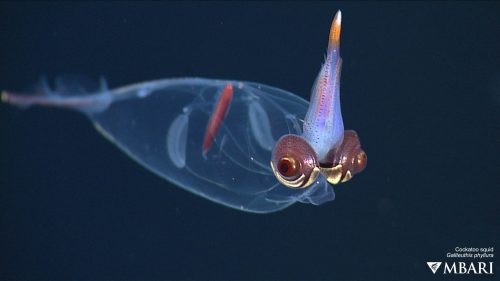 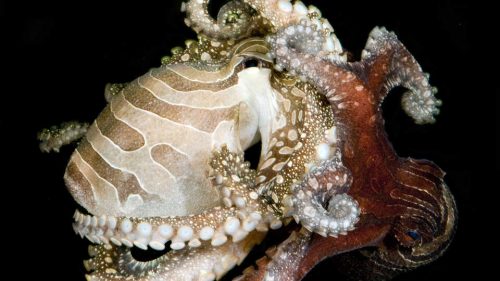 There are two Pacific Striped Octopuses in that image. I can’t untangle them.

It’s bad enough that Uncle Elmer is going to be bellowing his ugly opinions all evening, so don’t add this fellow who is so transparent that you can see his digestive gland churning away.

Really. The way he grips that poor Humboldt squid deserved a few chomps.

Even the peaceful octopus knows that sometimes you have to do battle. 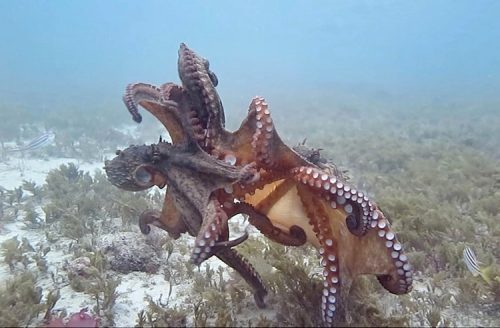 You might want to get snacks and fluff your pillow now, because all you get to do today is be mesmerized by a very long BBC Earth video. Lots of cephalopods in here, as well as other exotic sea creatures!

A giant squid washed ashore in Japan. Surprisingly, it was still alive!

A giant squid 3.35 metres in length has been found alive on a shore in western Japan.
Giant squid live in the deep sea, and is unusual for one to be washed ashore alive. The squid has now been transported to an aquarium pic.twitter.com/FGdc23MBjI

That looks like a sick squid to me — alive, but barely. I’m seeing conflicting reports that it’s already died, or that it’s living in an aquarium, or that it was airlifted to a secret kaiju laboratory on a remote volcanic island in the Pacific.