She has done a little renaming.

The section of 16th street in front of the White House is now officially “Black Lives Matter Plaza”. pic.twitter.com/bbJgAYE35b

And a little repainting. 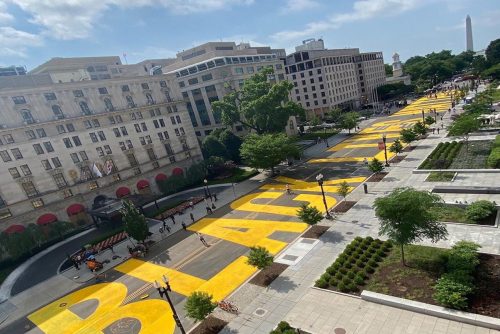 Choke on it, you horrible little stale cheeto.

Never tell me that an art history degree is useless.

Art history doesn’t usually have much to offer in the way of practical, directly actionable lessons. But Sarah Parcak, a renowned professor of Egyptology at the University of Alabama at Birmingham, recently plumbed humanity’s cultural past to offer some very concrete advice. On Sunday, she posted detailed, step-by-step instructions on Twitter (including a helpful diagram) for how to tear down an obelisk, culled from her research into ancient Egypt. (For every 10 feet of monument, you need 40 or more people; use rope attached to a chain; everyone should wear gloves; pull hard in unison from either side.)

After she shared the sketch, she added, “There might be one just like this in downtown Birmingham! What a coincidence. Can someone please show this thread to the folks there.”

Here’s a rough schematic. I note this is experimental archaeology in action! Just my professional Hot Take and you may need more people, longer rope, etc. everything depends on monument size. pic.twitter.com/lzl55CSPNt

You’d be surprised at what you can learn with a little education.

Also, while protesters failed to totally destroy the monument, the mayor of Birmingham promised to finish the job, which has prompted the state of Alabama to sue the city. Don’t worry! Liberal arts students are also fearless!

With every budget year, there are factions in Minneapolis that call for more police, in the mistaken belief that more police equals more safety. It’s never true, but they tend to get their way. As we can rather clearly see this year, the police are a destabilizing, violent institution that has grown over-confident in their untouchability.

Five decades ago, police departments operated under the authority of city governments, most notably serving as enforcers for corrupt political machines. That was then. With the decline of the machines in the ’70s, the police emerged as the most powerful section of municipal governments, more influenced by Homeland Security, regional fusion centers, and a police equipment industry aggressively pushing the latest in weapons and surveillance systems.

While politicians turn over every few years, the police have built an enduring base of support, unwavering in its belief that more cops mean more safety. As a result, their numbers, budgets, and clout have steadily increased over the years, as racial and economic inequality have grown.

Elected backers of police expansion like Minneapolis City Council members Linea Palmisano, Lisa Goodman, and Alondra Cano seem to believe they would be supporting a community-oriented police department spearheaded by Chief Medaria Arrodondo. That department is a mirage. They would be better off investing in a unicorn park. Reformist chiefs have at best a fleeting impact on their departments, their effort—what former Minneapolis Police chief Tony Bouza called his “futile attempt to reform the police”—erased within a year or two of their departure.

That’s changing. Right now, Minneapolis City Council members consider disbanding the police. I doubt it will be as radical as it should be — they’ll probably just end up stripping them of some functions and putting them in the hands of more responsible organizations — but it’s a first step.

Now the council members are listening to a city that is wounded, angry, fed up with decades of violence disproportionately visited upon black and brown residents. Various private and public bodies – from First Avenue to Minneapolis Public Schools – have essentially cut ties with the police department. Council members are trying to figure out what their next move is.

Their discussion is starting to sound a little more like what groups like Reclaim the Block and the Black Visions Collective have been saying for years. On Tuesday, Fletcher published a lengthy Twitter thread saying the police department was “irredeemably beyond reform,” and a “protection racket” that slows down responses as political payback.

“Several of us on the council are working on finding out what it would take to disband the Minneapolis Police Department and start fresh with a community-oriented, nonviolent public safety and outreach capacity,” he wrote.

You can peruse that thread in its entirety here.

Please, please make it happen. Remove this malignant force from our cities. All the money spent on cops and their toys and the prison system that feeds on police action would be far more effective if spent on correcting the root source of much of our crime: poverty.

Well there’s our problem. When wingnuts see a man with swastikas tattooed on his body, they think that’s antifa. Sorry, guy, that’s just the fa.

When I see that goon I see ANTIFA. https://t.co/0yTmwfAPhw

Although it should be said that the guy with the tats has seen the error of his ways, and has repudiated Naziism. You can’t judge a man by the mistakes of his past, I guess.

This, by the way, is Chris Loesch. Scraggly bearded, skimpy mustached Chris Loesch, who is so vain that he thinks curling a sparse few hairs with wax makes him look good. 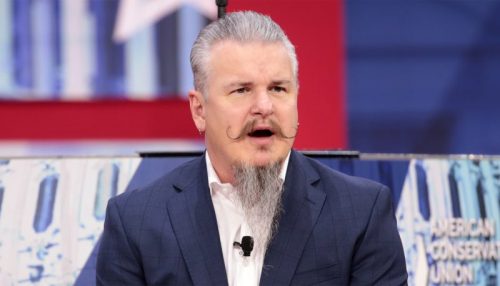 That’s just an ongoing mistake. I’ll forgive him after he apologizes for his deeper crimes against humanity.

Little ol’ Stevens County, Minnesota, population 10,000 (dropping to between 8 and 9 thousand when the students go home) has been busy militarizing their police force.

We don't need a mine resistant vehicle. I can't think of a county that does. https://t.co/BdGT1rbSdv

Right. We needed one of these things: 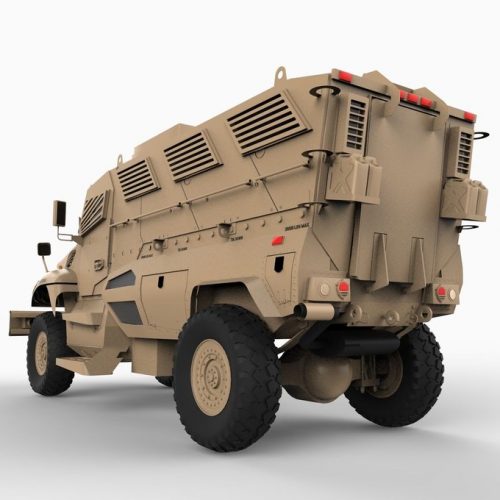 I vaguely recall reading a while back that there was a small coalition of a couple of rural counties to put together a mighty task force of super-soldiers to handle Big Crime; they may have made the news for an assault on a motel in Sauk Center. So maybe it “serves” a slightly larger population, where “serves” is a rather dubious verb.

I’m having a tough time imagining the circumstances in which local law would need a monster troop transport. A meth house catches fire, and the gangly, toothless desperate addicts start puking on the lawn? Another cat lady refuses to allow animal services to break up her 50 cat swarm? The corn revolts? Maybe they’re getting ready for a hypothetical “Red Dawn” scenario.

There is a petition to defund the Minneapolis police. Maybe we should all be looking closer to home, too, and asking what kind of ridiculous expenditures our local police are making. This is basically Mayberry — we’ve got some modern challenges, but nothing that requires a tank.

The Iowa primaries were held yesterday. Great news: rabid racist and white supremacist Steve King is out on his ass. Finally!

The bad news: he was defeated for the Republican nomination by Randy Feenstra, who promises to be more of the same, except he just won’t say the quiet parts out loud anymore.

But there have been notable changes of heart in Iowa, too. Among those who backed Feenstra was activist Bob Vander Plaats, a GOP political kingmaker in western Iowa who once was one of King’s staunchest allies. In an ad funded by the Priorities for Iowa super PAC, Vander Plaats said King was “no longer effective” in Washington — echoing Feenstra’s central campaign message.

“He can’t deliver for President Trump, and he can’t advance our conservative values,” he said. “Thankfully, Iowa has a better choice.”

Craig Robinson, who runs the website TheIowaRepublican.com, said Feenstra offered the district everything King did as a conservative, but with no baggage. 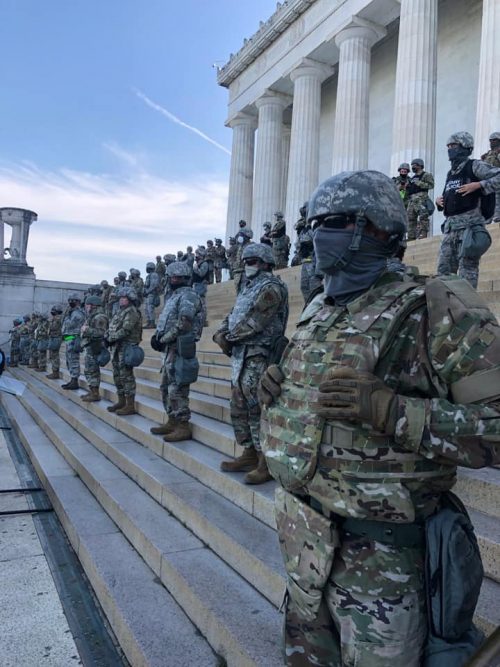 The flag should have been burned in 1865, we’re just now getting around to it. Have you got any other symbols of treachery and racism we could set on fire? 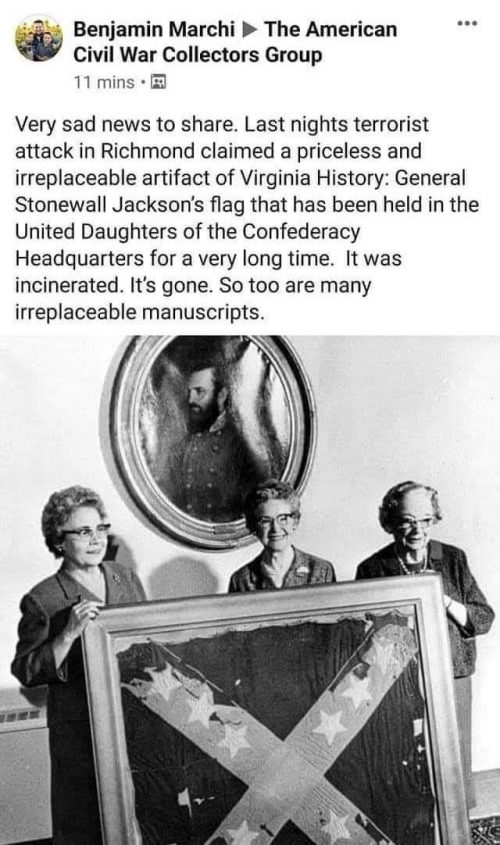 It’s also about time that the Daughters of the Confederate Revolution closed up shop in shame. 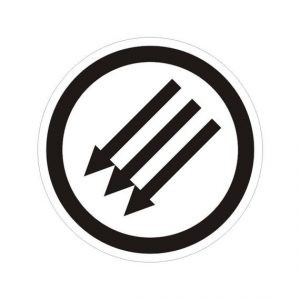 The president has his solution: DOMINATE! 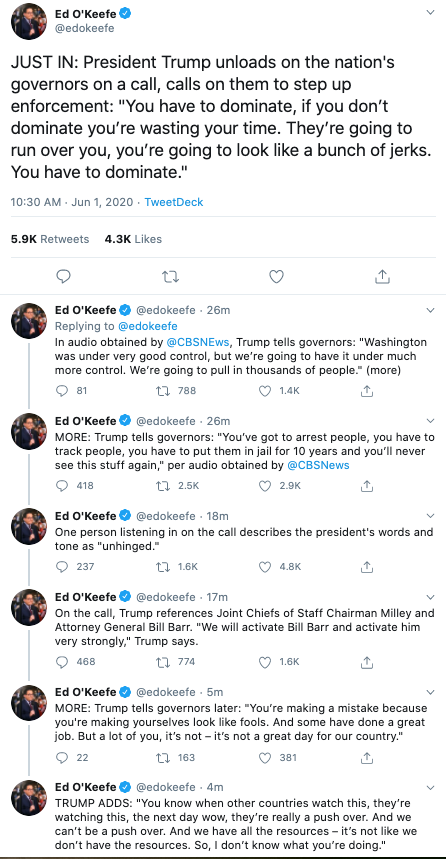 What he’s really worried about is that he looks weak before all those nations he respects: Russian, North Korea, any random dictatorship out there.