Arachnologists spend a lot of time staring at spider genitals, since they’re often key to classifying them. I’ve mentioned that I want to work out some taxonomic ignorance of my own, so I’m finding myself trying to do likewise. This morning I was working with my shiny new toy to see if I could resolve the important details with an SLR tricked out with a 100mm macro lens and 65mm of extension tubes. This represents the maximum magnification I can squeeze out of this set up, short of mounting the animals under the microscope, which would give me hella more magnification.

I’d rather not go that route, though, because it requires more manipulation of the animals and I’d rather keep them happy and relaxed. Right now in their cages, they lounge about upside down, all quiet and mellow, their legs spread out and flaunting their genitalia to the sky. I can just pop the lid and zoom in with my camera lens and they’re totally unperturbed and au naturale, exposed and waiting for their close-up. This would also be the case if I encountered them in the wild, where I’m typically not lugging a microscope around with me. The hope is that my camera would have enough oomph to get all the diagnostic details.

Long story short…probably not. I’ll throw in a few photos below the fold, but they aren’t quite good enough to see what I need to see.

What I need to resolve is in the dark pigmented area of the anterior abdomen where her feminine mystery is located. The lighting isn’t bad, but I can’t quite peer in closely enough. 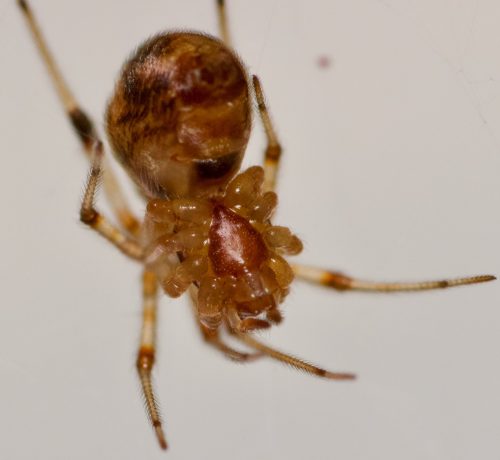 Meanwhile, this one has posed with her third left limb shyly veiling her zone. There are hints of structure there, but even if she wasn’t trying to be modest I don’t think I could get a crisp enough examination. 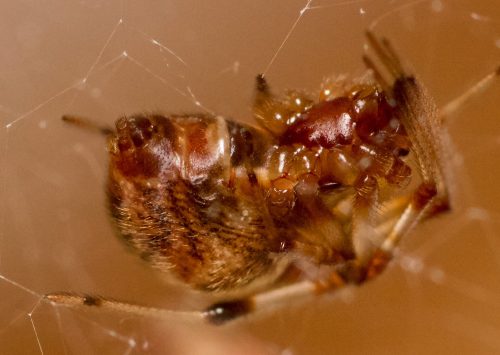 Oh, well, it’s fun trying. Even with all the extension tubes in, I’m still dazzled by how much working distance this lens gives me. Unfortunately, I’m beginning to understand why all the real arachnologists fix and clear and dissect to get good look at what’s going on in this region, and I guess I need to be a spider gynecologist/pathologist rather than a spider pornographer.

My current plan, then, is to do a post-mortem classification after they die of natural causes, which will also identify the species of all their offspring. Alternatively, I could also do breeding experiments to at least divide my colony into groups, although there the concern would be that maybe I’d get hybrids and totally confuse everything.

Maybe male pedipalps would be more accessible features for classification?

Above the law » « The IDW is f*cking embarrassing