Here’s another wintertime project I’ve got to work on. I’ve got all these spiders I collected, and I’m confident that they’re all of genus Parasteatoda. However, we’ve got two species in this genus here in Minnesota: P. tepidariorum, which is the darling model system in developmental biology, and P. tabulata, which is more obscure, but I suspect is fairly common around here. In the literature, P. tabulata is the one that builds nests of debris suspended in their webs; P. tepidariorum isn’t described as doing that, but who knows? I’ve collected a lot of spiders in outdoor environments with the fancy cribs made of leaves and gravel, and the ones I collect indoors don’t do that. Is this just an environmentally-induced variant?

That’s not what the taxonomic literature says. Rather, there is some contentious debate about distinguishing the two, which is made clear by close-up inspections of dissected genitalia. Their epigynes have subtly different shapes.

This is not a playing field I’m competent to contest. You should see this stuff: intricate, carefully drawn illustrations of the P. tepidariorum epigyne vs. equally detailed drawings of the P. tabulata epigyne. OK, gang, I surrender — I struggle to figure out what the heck I’m looking at there. I clearly need to work on my knowledge of spider sexual organs, not something I ever expected I’d have to do. I’m also handicapped by the fact that I’m working with live animals, and killing them and ripping out their genitals and clearing them in clove oil is kind of antithetical to breeding them. Also, I like my little spider friends.

So I’m trying to get photos of their genitals to see if I can distinguish them. Here’s one. Pretty racy, I know. 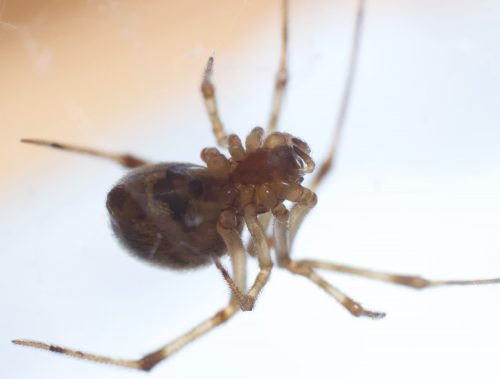 You’re probably saying “Whu…? Where?”. It’s the dark oval on the anterior end of the abdomen, just behind the posteriormost legs. And no, I don’t see enough detail there myself. I’ve got to work on getting higher magnifications and better-lit close-ups. And I’m going to have to create a folder of numerous spider vulva piccies on my computer so I can study them and learn better how to tell them apart.

No, this isn’t creepy at all.

All right, here are some more conventional photos. This is Gamera, not in a cheesecake pose, but nicely illustrating her abdominal pigmentation, something else I want to look into. I suspect she’s P. tepidariorum from where I caught her and her large size, but I won’t know for sure until I zoom into her epigyne. 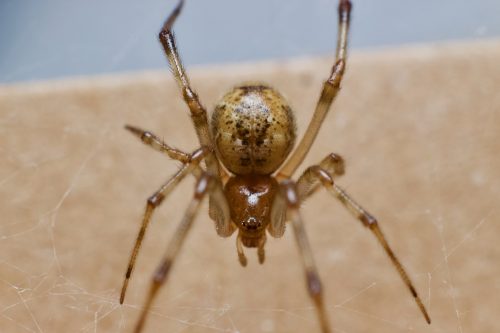 Well, maybe this next one is slightly risque: she’s giving you all a coquettish little wave and smiling. What a tease. 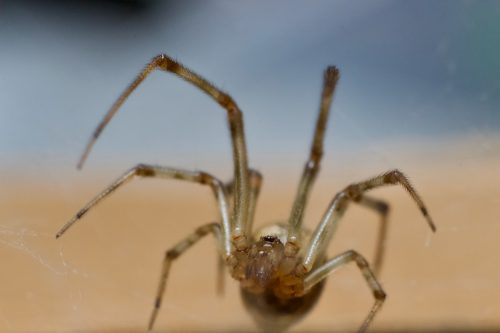