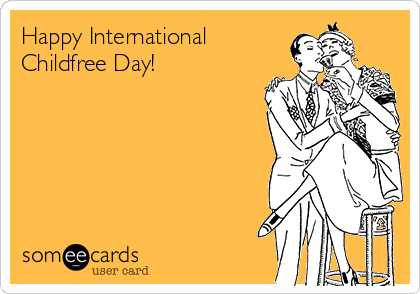 As the title says, August 1st is International Childfree Day, a day to celebrate those who choose not to have children.  Some may see that as a contradiction, to celebrate what looks like “doing nothing”.  In reality, being Childfree is a carefully thought out decision made by responsible people who have asked themselves:

Among MANY other valid reasons.

Being Childfree is NOT: 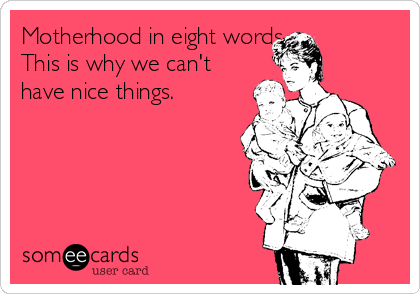 The percent of people who are Childfree is increasing with every generation, highest among Generation Y and Millennials, similar to how they the most likely to be LGBTQIA.  These are people aware of their rights, who think globally informed, and are not as constrained by social pressure as earlier generations were.

Why a generation is choosing to be child-free

The biggest contribution anyone can make to the climate crisis is not to have children. So why do we still treat parenthood as the default?

When I think that it won’t hurt too much, I imagine the children I will not have. Would they be more like me or my partner? Would they have inherited my thatch of hair, our terrible eyesight? Mostly, a child is so abstract to me, living with high rent, student debt, no property and no room, that the absence barely registers. But sometimes I suddenly want a daughter with the same staggering intensity my father felt when he first cradled my tiny body in his big hands. I want to feel that reassuring weight, a reminder of the persistence of life.

Then I remember the numbers. If my baby were to be born today, they would be 10 years old when a quarter of the world’s insects could be gone, when 100 million children are expected to be suffering extreme food scarcity. My child would be 23 when 99% of coral reefs are set to experience severe bleaching. They would be 30 – my age now – when 200 million climate refugees will be roaming the world, when half of all species on Earth are predicted to be extinct in the wild. They would be 80 in 2100, when parts of Australia, Africa and the United States could be uninhabitable.

We are in the middle of a mass extinction, the first caused by a single species. There are 7.8 billion of us, on a planet that scientists estimate can support 1.5 billion humans living as the average US citizen does today.

How many boomers and Generation X people were pushed into unwanted marriage, especially LGBTQIA people?  Pressured into having kids are parent demanding “grandchildren”?  How many women didn’t have access to abortion and birth control to avoid unwanted pregnancy?  There could be millions of people over forty who wanted to be Childfree but didn’t know it was an option, or had it taken away from them.

There is nothing selfish about choosing not to make a problem worse. 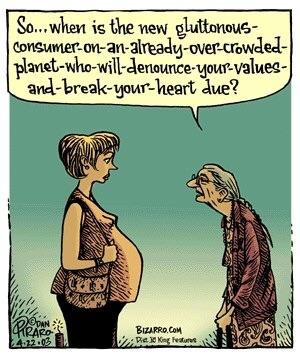 Here’s a CBC podcast from 2018, thirty minutes discussing why people are Childfree.  Being interviewed is Meghan Daum, editor of “Selfish, Shallow, and Self-Absorbed: Sixteen Writers on the Decision Not to Have Kids”.  This comic by Patricia Flaviana appears on the CBC page: 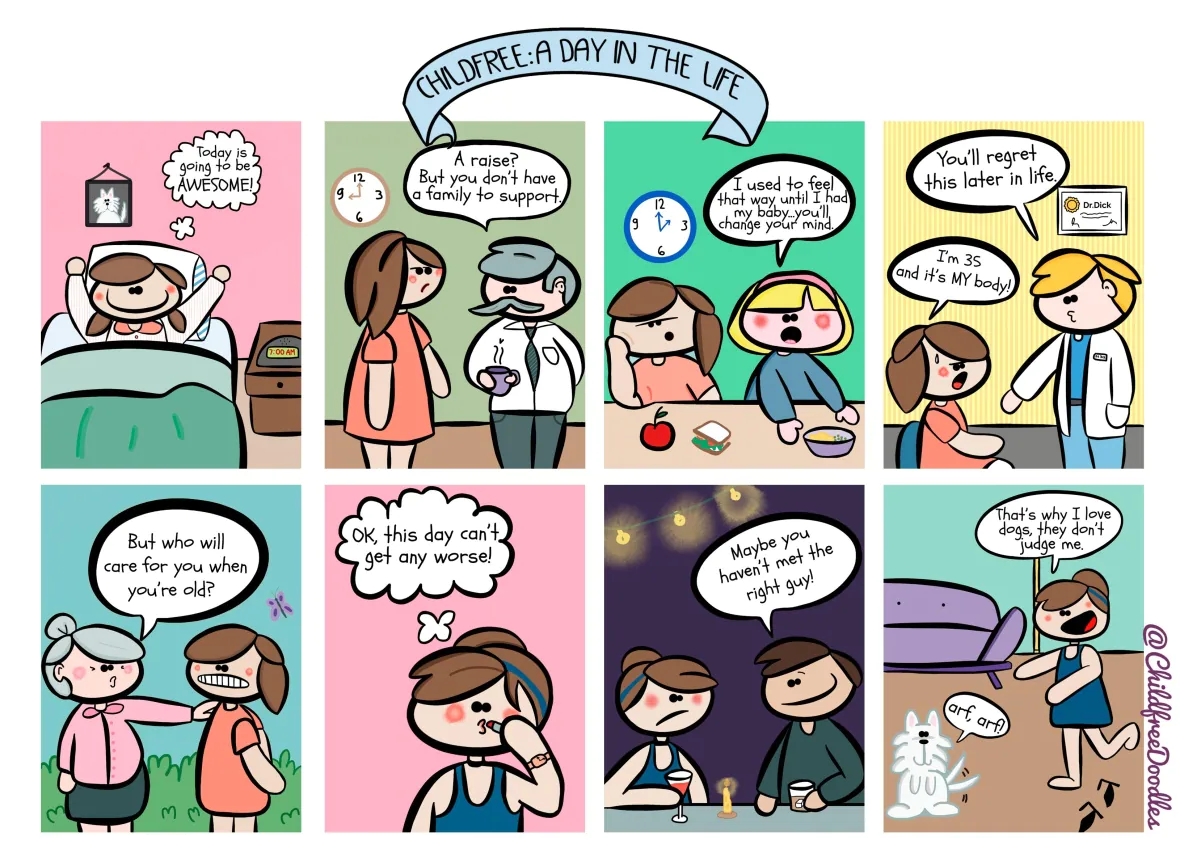 Having children is an ability that some people have, not an “obligation” for anyone.

Not your family, not society, not the ovum or sperm that will end up being disposed by your body and never become people. 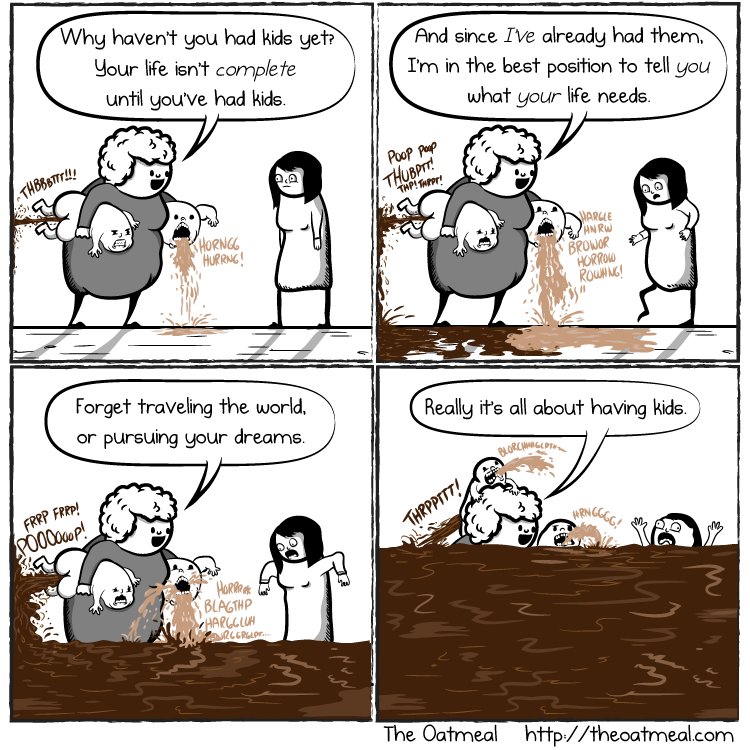 There are a collection of articles on being Childfree, below the fold.

Choosing To Be Childfree

To have or not have children is a human right that everybody should be able to exercise without judgment or criticism. Some people are unable to have biological children, and some people choose not to have any for social, economic, environmental or other reasons.

Many adults and couples that do not have children live very fulfilling lives. However, in some societies there is still a stigma attached to being childfree, particularly in the case of childfree women. These are some of the most common questions encountered about making the decision to be childfree.

There was a time when people expected newlyweds to soon add at least one or two babies to the family. Over the years, however, societal expectations for couples has eased, creating greater leeway with one of the biggest decisions of their lives — whether to become parents or remain child-free.

Nowadays, child-free couples in their 20s or 30s undoubtedly enjoy more freedom. They typically have more time and money than their friends who are parents of young children. But what is life like now for couples over 50 who haven’t had kids, whether by choice or by chance?

Are couples missing out when they have no grandchildren to take to the zoo or graduations to attend? Don’t be too quick to jump to that conclusion.

These child-free couples say that not having children or grandchildren hasn’t impeded their nurturing nature, marital happiness or ability to lead fulfilling lives.

I definitely agree with this item.  Much like non-smokers are forced to do extra work because addicts “take a smoke break”, those who don’t have children are not given concessions at the workplace.  And in the case of women, denied raises because “you don’t have a family”.  As if there weren’t enough sexism in the workplace.

There is a silent friction in our society. It is expressed in shifty, sidelong glances, the disapproving pursing of lips and besmirching of absent parties on coffee breaks. I have observed it for some time. I have talked with friends about it, and colleagues. It is the attitude of parents towards those without children, and vice versa.

I couldn’t help but be a little bit interested. It seemed clear neither of them had children. One of them, the fellow with what you might call a slightly more “curated” appearance, who evidently enjoyed sporting activities, was complaining he found it unacceptable that a colleague sometimes left the office early to attend his son’s football matches. The complainer, through a mouthful of hummus or some other such drab and mysterious goo, pointed out he would consequently be late for, or miss entirely, his own evening football practice as the colleague’s absence meant he had more work to do before he could leave.

This is hardly an apocalyptic scenario. The very crust of the Earth will not scream open and swallow us all with the injustice. However, it speaks to a presumption that seems to run deep within us – that the time of parents is more valuable than that of the childless. In families of adult children, it is often the sibling with no offspring of their own to whom the burden of care of elderly parents falls. Why, I thought, should the time of this floppy-haired man at the cafe. . .be less valuable than that of his colleague who had chosen to have children?

Quoting from the audio on the linked item below,

“Not everyone wants to be a parent.  And research suggests that those without kids are actually happier.  Parenthood is like a rollercoaster, of ups and downs, of highs and lows.  And life without children is simply much more stable.  It has much less variation.”

Fifteen percent of US women have reached their forties without having children.

Why having kids doesn’t necessarily make you happier, according to research

Parents often refer to their children as their “pride and joy.” But research tells a different story: Having kids doesn’t necessarily make people happier.

Most parents feel that their children are incredibly important sources of life satisfaction, says Jennifer Glass, professor of sociology at the University of Texas at Austin and a demographer who studies the relationship between parenthood and well-being.

‘I had second thoughts’: the Gen Z-ers choosing not to have children

Gen Z is coming of age in the Covid crisis, with school leavers and graduates facing a jobs crunch, environmental crisis and widespread social anxiety.

Their response? According to research, it is to decide not to have children so they can retire early and put less strain on an overpopulated planet.

One in 10 childless 18- to 23-year-olds are considering not having children, according to the research carried out by the online pension providers PensionBee, citing plans to retire early as a key driver of their decision.

There have never been “mini baby booms” after blackouts, and after one year of COVID-19 and lockdowns, the rate of new births in the US is below average.

“Blackout baby booms” are male rape fantasies, not a reality.

The summer after I graduated college, I was cleaning out boxes in my childhood bedroom when I stumbled across an old journal.

Inside was a timeline written in chicken scratch: Marriage at age 20, with a child every two years for eight years, to be completed by age 30. I laughed as I thought to myself, “In today’s economy?”

I flipped the journal over to see the date: 1997. At age 6, only familiar with the societal standards I had grown up with, this was how I envisioned my future. Fifteen years later, I was thankful I had forgotten about this path.

I can’t help but recall that as I see the story of the pandemic baby bust swirling around the Internet. Last month, the Centers for Disease Control and Prevention (CDC) dropped a new report that revealed the US birth rate had fallen by 4%, the sharpest single-year decline in nearly 50 years and the lowest number of births since 1979.

Their Minds Have Gone: And they have lost their census » « That Was Subtle: The gold medal for trolling goes to Japan