In many Asian cultures, sarcasm isn’t very common.  I remember how South Koreans would describe my sarcasm as “cold”, and other times in other countries (no names, so as not to insult anyone) people have not picked up on sarcasm that North Americans or Europeans readily would.

So when the men’s doubles badminton gold medals were handed out on Sunday, either what happened was purely an accident, or Japan’s olympic committee has taken trolling to a whole new level.

Over the first week of the olympics, Japan’s official scoring table has listed the name Taiwan instead of “Chinese Taipei” which Beijing demands and many sports bodies kowtow to them, and to use a five leafed flower shape with red and blue outlines.  At first, they did, but over the past week Japan’s OC and official reports have used the name Taiwan.  And it’s not just Japan, many countries’ media (even Russia) are using either or both the name Taiwan and the official Taiwan flag on the olympic medal tables (red field, blue canton, white 12 pointed star) instead of the five petal white flag or the China-approved name.

During the medal ceremonies, the gold, silver, and bronze winners stand on the podium, bouquets of flowers are given to each, and the gold medal winner’s national anthem or approved music, in the case of Russian athletes, is played.  When the women’s 59kg gold medal was awarded (more below the fold), Taiwan’s national anthem was not played because the IOC kowtows to China.  The lack of an anthem being played with the games in Japan is questionable, in light of Japan’s imperial history of occupation.  When Sohn Kee-chung of Korea won the marathon at the 1936 olympics, he was forced to run under a Japanese name, and the imperial Japanese flag and anthem played, not the Korean anthem.

Today, Taiwan won its second gold in men’s doubles badminton.  The Taiwan team beat China’s in the final and appear on the podium together, which is a slap in the face to Beijing.  But someone at the Japanese OC decided to rub salt into the wound by playing Taiwan’s national anthem at the olympics for the first time since the 1970s.

The most subtle part of the trolling was the bouquet of flowers.  Look at the photo all three pairs of medallists are holding: they’re sunflowers.  It is the Sunflower Movement which elected president Tsai Ing-wen, and it is the Sunflower Movement which demands full independence from the PRC, plus international recognition from the UN.  I’ll bet Winnie the Pooh is fuming. 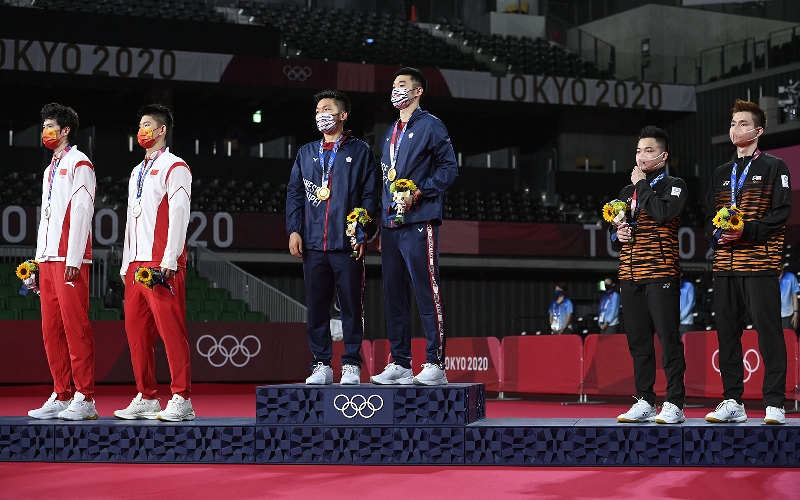 Taiwan’s flag anthem was played in front of Chinese athletes for the first time in the history of the Olympics on Saturday, when the Taiwanese team beat China in the badminton men’s doubles final.

Taiwanese badminton duo Lee Yang and Wang Chi-lin beat the Chinese team by 21-18 and 21-12, clinching the second gold medal for the self-governing island at the Tokyo 2020 Games. China took home silver with the loss.

Both teams attended the medal ceremony and listened as Taiwan’s flag anthem was played. Taiwan has both an anthem and a flag anthem, the latter of which is commonly played at international sporting events.

China went into this olympics expecting to win eight gold medels in women’s and men’s weightlifting. Those plans have gone up in smoke.

Taiwan’s Kuo Hsing-chun (郭婞淳), also named Kuo Tana, won the women’s 59kg weight lifting gold.  If you’ve see her photo in the news (see below), you’ll recognize that she’s not ethnic Chinese; rather, she is one of the Indigenous Amis people of Taiwan. Tana is her Amis name.  Fang Wan-ling (方莞靈) finished fourth in the 49kg weight class but may win bronze if China’s Hou Zhihui fails her doping retest. (Hou is the woman with the picture of facial exertion that the PRC media is complaining about, calling it “unflattering”.) Fang is another Indigenous Taiwanese person, hailing from the Tsou people. 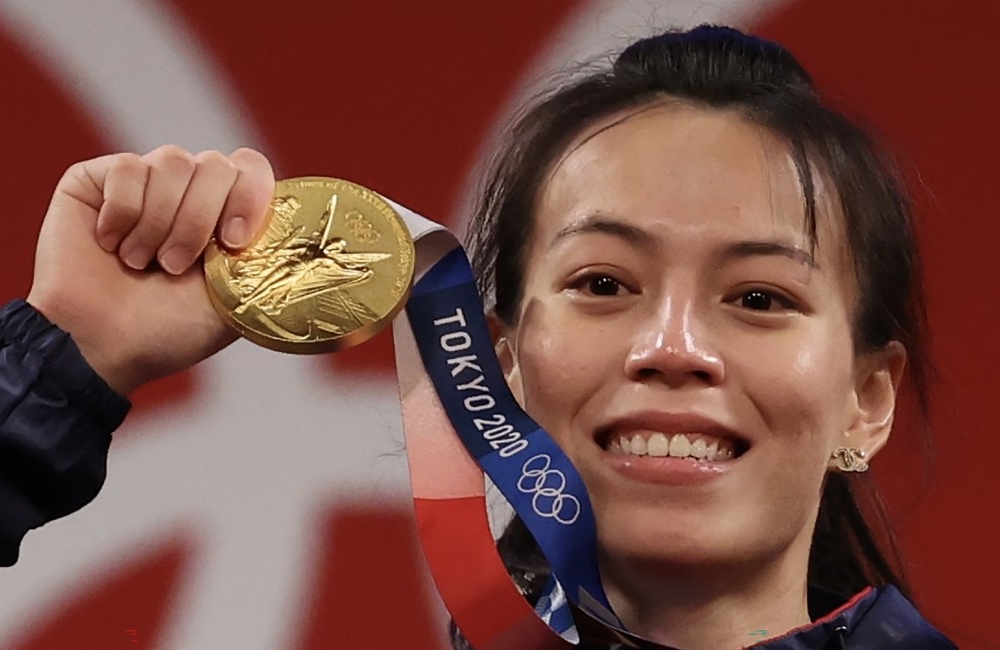 Philippine weight lifter Hidilyn Diaz also upset the PRC by winning the 55kg weight class.  Diaz had a lot going against her: no financial support from the Philippine government, and she was falsely accused by Philippine “president” Duterte of being part of a plot to overthrow his government.  She might give credit and thanks to her superior officers in the Philippine military, but not Duterte.  I love that this will be a big poke in the eye for him too.