Every year around the winter solstice, I trot out the idea of calendar reform.  (Yeah, I know it was almost two weeks ago.)  I have a pipe dream where the world gets rid of the nonsensical “30 days hath November” calendar and start using mine.

In a leap year, we have December 31st.

It’s simple, easy to learn, consistent, and I’m sure those in the US who celebrate African-American History Month would love it after getting shafted with the shortest month on the existing calendar.

Let’s not stop there, designate the winter solstice as New Year’s Day.  Why not?  It makes a lot more sense than doing it eight to ten days later.

There were numerous New Year’s Eve parties in Taipei, and the one I attended was a lot of fun, with a lot of like-minded people, and I’m not just talking LGBTQIA.  Many young Taiwanese and most waiguoren here are atheist, agnostic or at least secular. And those who are religious start to realize they don’t get to and shouldn’t be able to dictate to others.  There’s also a very strong anti-China/separatist streak amongst most young adults.

A drag performer was handing out numerous two word signs and people were happily waving them.  I’m sure you can guess the other word on them.

Other signs would likely be appreciated around these parts. 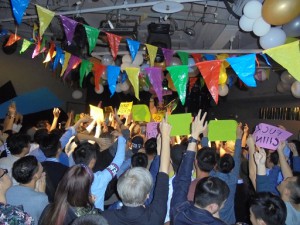 Must Resist: Hate groups have no place in Taiwan » « Music Rules: It was just another day