And in case we haven’t seen enough screaming bullies yet, let us change the scene to Jaipur. 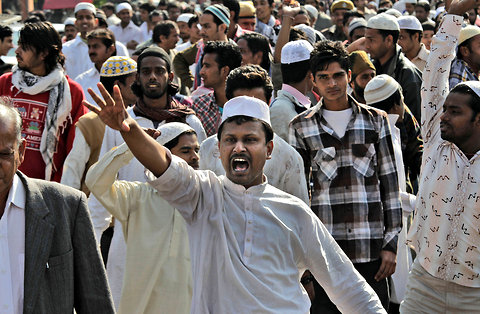 Salman Rushdie’s virtual participation at the Jaipur Literature Festival was canceled at the last minute Tuesday,  after Muslim groups attending the festival threatened violence if his image was shown.

‘‘There are a large number of people adverse to this link in and around this  property and they have threatened violence,’’ said Thakur Ram Pratap Singh of Diggi, the owner of Diggi Palace, the festival venue. ‘‘This decision is necessary to protect everyone here,’’ he said.

Why? Why have they? Oh, no reason, really. Somebody told them Rushdie is a Bad Man who said something Bad about Allah. Same with Irshad Manji, no doubt. It’s something to do. If you have money you go mountaineering, if you don’t you go to public places and scream yourself purple. The second hobby, sadly, fucks things up for everyone involved; lose-lose.

Mr. Rushdie criticized both the Indian government and Islamic leaders in an interview Tuesday evening with television channel NDTV. While Mr. Rushdie said he has been cast as an enemy of Islam, the real enemies are “the leaders, the Deobandis, the various extremist leaders and their followers, who behave like this, because what they do is to strengthen the extremely negative image of Islam as an intolerant, repressive, and violent culture,” he said.

Exactly so. The Rage Boys don’t do anybody any good in the long run, not even the Rage Boys of Tomorrow. Or rather, especially not them. Better to be a Rushdie than a Rage Boy.