Haha don’t worry. The pope may present himself as some kind of lovable guy who just happened to bumble his kindly way up the hierarchy of an evil institution, but don’t worry, he’s still a patronizing clueless eyes-closed asshole about women. Whew, what a relief, right? He’s normal, and he won’t be giving all the expensive real estate away to some poor people.

The pope said women were “the most beautiful thing God has made”. And he added: “Theology cannot be done without this feminine touch.”

END_OF_DOCUMENT_TOKEN_TO_BE_REPLACED

Soraya has commentary at Time magazine.

In the practice of many religions, girls’ and women’s relationship to the divine are mediated, in strictly binary terms, by men: their speech, their ways of being and their judgments. Women’s behavior, especially sexual, is policed in ways that consolidate male power. It is impossible to be, in this particular case, a conservative Christian, without accepting and perpetuating the subordination of women to male rule. It is also blatant in “official” Catholicism, Mormonism, Evangelical Protestantism, Orthodox Judaism and Islam.

The fundamental psychology of these ideas, of religious male governance, does not exist in a silo, isolated from family structures, public life or political organization. END_OF_DOCUMENT_TOKEN_TO_BE_REPLACED

The legal staff at American Atheists is doing a live ask questions thing about the Hobby Lobby ruling in 50 minutes from now, 7 pm Eastern time, 4 my time, midnight UK time.

Update: here is the video link.

I know what I want to ask. On p 3 of the Hobby Lobby ruling we are told that the purpose of granting rights to corporations is to protect the rights of people associated with the corporation, including shareholders, officers and employees. What’s to prevent a group of shareholders and/or employees from counter-suing to seek protection for *their* rights? END_OF_DOCUMENT_TOKEN_TO_BE_REPLACED

A survivor of  a Canadian home for single mothers in the 1970s left a comment in a Facebook group for such survivors yesterday. It froze my blood, and I asked the author if I could post it on my blog, with or without her name. She said yes just now, with no name (so I’m not linking, either).

I suppose this is one of those times when I should include a trigger warning. This is a horrible story.

In the home that I was in, me and another unwed mother (both of us were 8 months gone) were forced to deliver a dead deformed baby of another of the mothers there. This was done to punish all of us. The hospital had sent this poor girl back to the home to deliver the dead baby. The staff locked themselves in the office and refused to help. This poor girl should have been in hospital but as the hospital knew her baby was dead inside of her (it appears that it was Anencephaly), they didn’t care. She was 7 months gone. I sometimes still have nightmares about that. The office staff didn’t even come out when the ambulance arrived (not sure who called them but glad someone did). 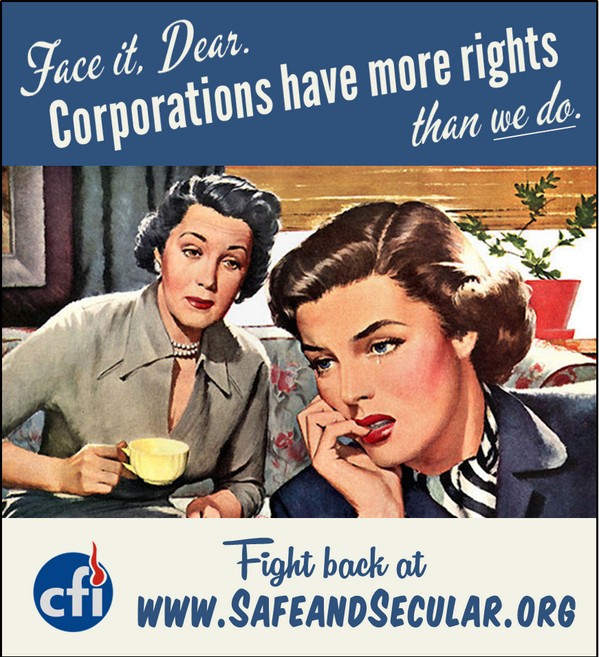 “The Supreme Court has placed the religious views of corporate shareholders over the legitimate health care concerns of employees,” said Roy Speckhardt, executive director of the American Humanist Association. “This isn’t religious liberty—it’s religious intrusion that will negatively affect many hard-working Americans.”

By privileging the religious views of corporate owners, the ruling places a substantial burden on women who wish to obtain birth control methods, such as the IUD or morning after pill, the costs of which can be as high as $1,000 annually. The ruling may also spur other for-profit corporations to deny employees access to certain medical procedures, based on their owners’ personal creeds. END_OF_DOCUMENT_TOKEN_TO_BE_REPLACED

(a) In general
Government shall not substantially burden a person’s exercise of religion even if the burden results from a rule of general applicability, except as provided in subsection (b) of this section.
(b) Exception
Government may substantially burden a person’s exercise of religion only if it demonstrates that application of the burden to the person—
(1) is in furtherance of a compelling governmental interest; and
(2) is the least restrictive means of furthering that compelling governmental interest. END_OF_DOCUMENT_TOKEN_TO_BE_REPLACED 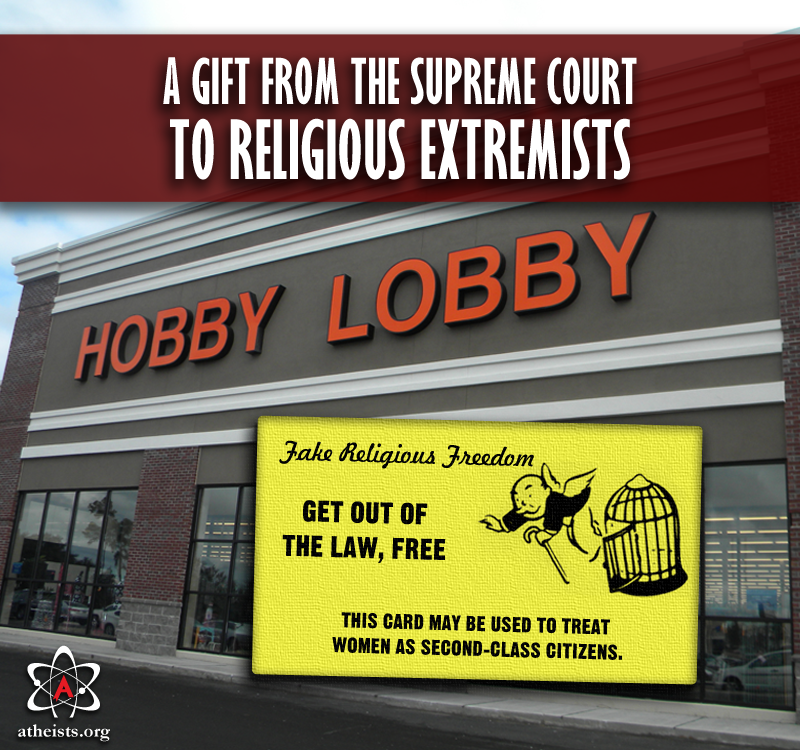