Well this is huge.

In a ruling that advocates described as a historic victory for Central American refugees, a federal immigration board said Tuesday that a married woman fleeing domestic violence in Guatemala, where authorities could not or would not protect her, can seek political asylum in the United States.

A woman who has been brutally beaten by her husband, who tried to prevent her from leaving, has suffered “harm rising to the level of persecution,” said the Board of Immigration Appeals, which oversees the Justice Department‘s immigration courts.

END_OF_DOCUMENT_TOKEN_TO_BE_REPLACED

Another nice thing – a bunch of women have had naked pictures of themselves stolen and posted online. Punishing women for existing just never gets old, does it.

A hacker has reportedly obtained nude photos of a slew of female celebrities including Jennifer Lawrence.

The anonymous source, according to The Hollywood Gossip, has 60 images of the 24-year-old The Hunger Games star in various states of undress and has posted them on an online bulletin board. The photos of Lawrence, some of which are topless, have since appeared on photo sharing site Imgur.

Because obviously women have no right to be left alone, because they’re women – they’re public property. END_OF_DOCUMENT_TOKEN_TO_BE_REPLACED

I’m reading a piece by Paul Bloom in the Boston Review arguing that empathy is a bad thing. I say it in the present tense because I haven’t finished yet; I stopped to argue with something he said, before finishing the whole thing, because I feel like it. If I were reading it offline I would do the same thing in a notebook. (So it will probably turn out that he answers the question, but I want to say anyway.)

Most people see the benefits of empathy as akin to the evils of racism: too obvious to require justification. I think this is a mistake. I have argued elsewhere that certain features of empathy make it a poor guide to social policy. Empathy is biased; we are more prone to feel empathy for attractive people and for those who look like us or share our ethnic or national background. And empathy is narrow; it connects us to particular individuals, real or imagined, but is insensitive to numerical differences and statistical data. END_OF_DOCUMENT_TOKEN_TO_BE_REPLACED

Will Self says Orwell was a talented mediocrity.

The curious thing is that while during the post-war period we’ve had many political leaders, we’ve got by with just a single Supreme Mediocrity – George Orwell.

I don’t doubt characterising Orwell as a talented mediocrity will put noses out of joint. Not Orwell, surely! Orwell the tireless campaigner for social justice and economic equality; Orwell the prophetic voice, crying out in the wartime wilderness against the dangers of totalitarianism and the rise of the surveillance state; Orwell, who nobly took up arms in the cause of Spanish democracy, then, equally nobly, exposed the cause’s subversion by Soviet realpolitik; Orwell, who lived in saintly penury and preached the solid virtues of homespun Englishness; Orwell, who died prematurely, his last gift to the people he so admired being a list of suspected Soviet agents he sent to MI5.

The BBC News Magazine has a longish piece by Shaimaa Khalil about not wearing hijab then wearing it then not wearing it and now wearing it again – in which, bizarrely, she never mentions the actual (and obvious) gender politics of it. It’s just a religious requirement or duty that she either accepts or doesn’t accept, but the content of the requirement/duty is left out.

She talks about photos from the 50s and 60s that speak volumes about social change in Egypt.

There they are in short-sleeved dresses, impeccably cinched at the waist. The dresses of some of the younger ones actually stopped well above the knee. And the hair! END_OF_DOCUMENT_TOKEN_TO_BE_REPLACED

I love this Jesus and Mo: 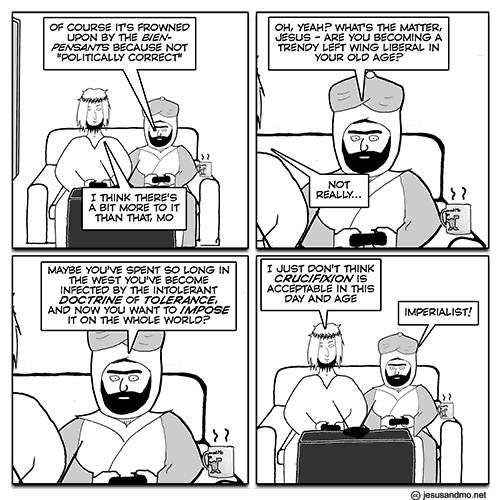 I’m a cultural imperialist. I believe in universal human rights.

Mo perches his steaming hot tea on the arm of the couch. Risky.

Oh looky here, what do you know – Phil “Thunderf00t” Mason who thinks Anita Sarkeesian is lying about getting threats for the sake of “PR” – that Phil Mason posting in October 2011 about threats he gets.

So here I am at the Texas Freethought convention, where I’ve met for the first time Matt Dillahunty from the Atheist Experience, and been having a great time with folks such as Aronra (also met in person for the first time) and many others when I get email from the infamous ‘crying muslim’ (dawahfilms).  He STILL seems to be operating under the delusion that universities base their hiring and firing policies based on how much a v. whiney pussy complains about how someone explained to him that his religion made him both behave like an ass, and why his religion was evidently stupid.  The baffling thing is he seems to think that I will be intimidated by his delusions.

Here’s a terrible thing you can look at.

It’s a compilation of bits from training videos by The Good News Club, so you can see what absurd frightening wrong things they tell children…on school property.

END_OF_DOCUMENT_TOKEN_TO_BE_REPLACED

Bing offered to translate and for once I accepted the offer.