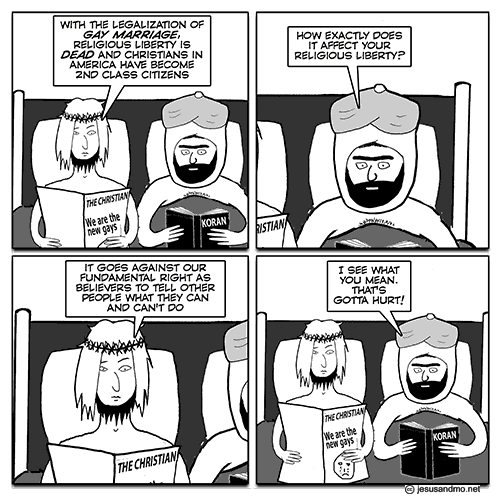 Adam Deen of the “Deen Institute” (he’s the founder and executive director) (of the “institute” he bashfully named after himself) is ranting at and about Maryam Namazie on Twitter. He’s ok with ex-Muslims, you see (for the purposes of this discussion), but not with ex-Muslim extremists. What’s that? One observer suggested “the difference is between silence and speech.”

Author of Jesus & Mo obliged with an illustration. END_OF_DOCUMENT_TOKEN_TO_BE_REPLACED

When the BBC interviewed the artist behind Jesus and Mo, its editors told him privately they could not show his drawing of Jesus saying “Hey” and Mo saying “How ya’ doin’?” because jihadis might murder the corporation’s correspondents in Pakistan.

That’s a reason, but what a pity they didn’t say that during the interview. What a pity Jeremy Paxman did the very opposite, and insinuated that the cartoonist had done a bad wrong thing in drawing such a cartoon at all. What a lousy crappy rotten thing to do, Jeremy Paxman. END_OF_DOCUMENT_TOKEN_TO_BE_REPLACED

The coverage of the controversy over Maajid Nawaz and Jesus & Mo has done a consistently bad job of getting right the part about how and why Chris Moos and Abhishek Phadnis wore their J & M T shirts on The Big Questions and why they unzipped their jackets to reveal them toward the end of the programme.

They did both because the BBC asked them to.

Most of the coverage has implied or said that it was their idea and that they did it to provoke. Wrong.

The latest is an article today in the Independent by Archie Bland.

His account of the how and why is much more detailed than previous ones, but it’s hardly fair to Chris and Abhishek.

in January the company behind The Big Questions got in touch about participating. The question to be debated was: “Should human rights always outweigh religious rights?” According to Chris Moos, the two students had not intended to wear the T-shirts, but the production company researcher gave them a nudge. “If you wanted to wear your T-shirts on the show, that is fine – however, we would ask that you wear a shirt over the top that could be unbuttoned,” he wrote. “If Nicky would like to see the shirts, he can ask you to unbutton your shirt to show it and we can do a close-up and therefore promote discussion.”

“I was quite surprised,” says Moos. However, Mentorn insist that the idea of wearing the T-shirts was the students’ own; they go as far as to say that “any suggestion that the students were encouraged to wear the T-shirts is entirely unfounded”, which seems a bit odd, when you reread that email. Either way, towards the end of the show, their moment came.

Moos nodded. “Would you like to see them?” he asked. Campbell certainly didn’t seem to know about his agreement with the researcher, and he hesitated. (Mentorn says that neither Campbell nor his editor were expecting the T-shirts; certainly it seems more like a cock-up than a conspiracy.) In the moment he took to say something, the two unzipped. Phadnis and Moos were not filmed in close-up, and the camera did not linger on them. But the cartoons were visible from an oblique angle.

Abhishek emailed Archie Bland to correct this account, and I have his and Chris’s permission to post his email here. They both would like to see the record set straight.

Chris also sent me the request in the email from the researcher to the two of them when arranging the programme:

If you wanted to wear your t-shirts on the show that is fine – however, we would ask that you wear a shirt over the top that could be unbuttoned. The reason why we’re asking this is merely because patterns or details (like cartoons) are distracting for the viewer at home and can appear fuzzy on camera (hence why we also ask that you don’t wear checked or striped clothing). Basically, if Nicky would like to see the t-shirts, he can ask you to unbutton your shirt to show it and we can do a close up and therefore promote discussion (does that make sense?).

And then afterwards the BBC can pretend we never did and look hard in the other direction and get Jeremy Paxman to prod Author repeatedly about why, why, WHY would you do such a thing. Does that make sense?

We read your report this morning. We had expected a fair representation of the facts of the case. Your report, however, makes it look like we smuggled the t-shirts in on the sly and produced them as a publicity stunt to take advantage of the producers’ naïveté and gratuitously cause offence to viewers or audience members.

You correctly point out that the producer actually suggested we wear the t-shirts, despite their assertions.

However, we would like to point out, that on January 5th, just before the recording began, we informed the producers that we were wearing the t-shirts. We were asked to sit in the middle of the first row and Nicky Campbell personally greeted us and said he was very keen to know more about our story. Given this  attention, and our prominent placement in the first row, and the communication with the production company, it was perfectly reasonable to assume that he was aware about the t-shirts and about the interest in our story.

As for the recording itself, please watch this video again – http://www.youtube.com/watch?v=LZ5X_lPXnvU –

51:21 – Nicky Campbell: There’s something else here as well … you guys wore some t-shirts

51:24 – (Phadnis and Moos make gestures, asking for permission to show the t-shirts)

51:27 – Nicky Campbell: Oh well! Yes (upon which we unzip our jackets to reveal the t-shirts)

We didn’t unzip “in the moment he took to say something”, as you put it – we gestured to him twice to ask for permission, then we asked “would you like to see them?” and he replied “oh well! yes” – only then did we begin to unzip my jackets.

We would be grateful if you could amend the piece to reflect the fact that Nicky Campbell explicitly gave us permission to show the t-shirts. At the moment the piece gives the impression to the unknowing reader that we uncovered the t-shirt against the will of Nicky Campbell and the BBC, that indeed we were using the programme to cause offence. As you know, in the current climate, this impression likely carries a risk to our personal safety.

Please amend the article to accurately reflect the facts and avoid any possibility of us suffering harm as a consequence of the publication of the article.

Thank you for your consideration.

The National Secular Society shares the form letter it got in response to its open letter to Channel 4 about its wretched decision to paste a black egg over Mo when it reported on the childish fuss over Maajid Nawaz and Jesus & Mo.

The letter, from Steve Reynolds of Channel 4 Viewer Enquiries, reads:

As we are sure you can appreciate, this is a very sensitive subject for many viewers. Channel 4 News editorial staff gave great consideration to the issues involved and believe that they reached a fair and balanced judgement, weighing up the potential for offence to some viewers by showing the depiction of the Prophet Mohammed and the necessity of showing the cartoon in full. END_OF_DOCUMENT_TOKEN_TO_BE_REPLACED

Stephen Evans of the National Secular Society writes an excellent open letter to Channel 4 about the Black Egg censorship of the image of Mo, sending it via the Huffington Post UK.

We were surprised and extremely disappointed to see that Channel 4 News took the decision to cover up the image of Mohammed when showing the Jesus & Mo cartoon, and we are thus keen to elicit the rationale behind that particular editorial decision.

During the report, it was noted that this decision was taken so as not to cause offence to some viewers; however we would like to point out that by your making this decision you have effectively taken a side in a debate where a Muslim man has suffered violent death threats after he explicitly said he did not find the cartoons offensive. You have taken the side of the reactionaries – the side of people who bully and violently threaten Muslims, such as Mr Nawaz, online. END_OF_DOCUMENT_TOKEN_TO_BE_REPLACED

Nick Cohen has a piece in the Observer on censorship at UK universities. He starts, as he should, with Chris and Abhishek.

On the morning of 3 October, Chris Moos and Abhishek Phadnis put on joke T-shirts, of the kind students wear the world over, and went to man the Atheist, Secularist and Humanist Society stall at the London School of Economics freshers’ fair. The bullying the university authorities visited upon them for the next 36 hours should provoke the most important free speech court case to hit British universities in years. It certainly deserves to. END_OF_DOCUMENT_TOKEN_TO_BE_REPLACED

The Independent reported on the LSE Student Union’s interference with the LSE Atheist, Secularist and Humanist Student society yesterday, including quoting one of Dawkins’s tweets.

It included one panel from the toon – an especially daring one.

Jesus and Mo get serious with the barmaid – too serious. 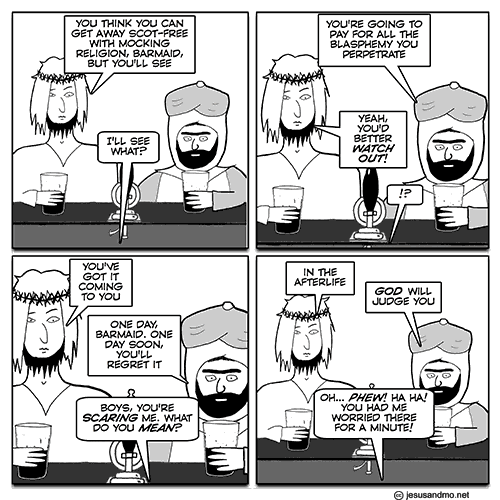 Mo draws the line. The barmaid had better start packing. 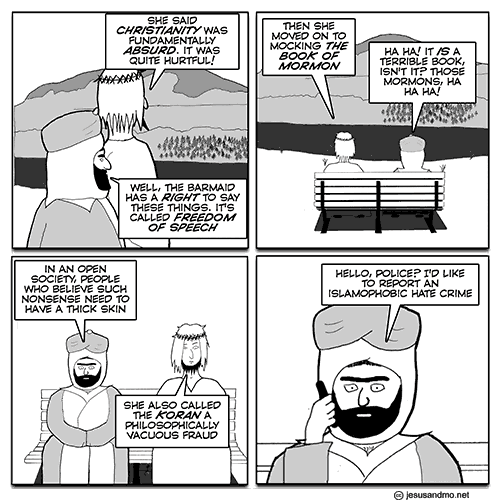