Nostalgia time. Let’s look back at the first blushing days of the new Global Secular Council, later to be the Secular Policy Institute – by which I mean, let’s look back at what I had to say about it starting in May 2014.

In Global shmobal, for instance, the first whisper of its arrival.

First? It’s not so global. They’re nearly all American or Ukanian, and the whole thing is clearly Anglophone.

Last? Its team of experts – 23 of them. Five women. Five. END_OF_DOCUMENT_TOKEN_TO_BE_REPLACED

So anyway, on Friday, I wrote again to the press contact person at the Global Secular Council to ask the question the GSC’s Twitter account never did answer, and first insulted me and then blocked me for asking.

Why did the Global Secular Council launch before inviting more “global” people to be on its panel of Experts?

She replied that she wanted to be sure I would not “not misconstrue or “twist” [her] text reply, and perhaps repopulate that misconception publicly.”

I couldn’t quite fathom how I would be able to do that as long as I quoted her exactly, which obviously I would do; I said as much, and with that she answered my question. Here is her answer: END_OF_DOCUMENT_TOKEN_TO_BE_REPLACED

Early this month Hemant posted a love note to the Secular Coalition for America.

I don’t love the SCA myself. I love it now a lot less than I did a week ago (which wasn’t much), because of its “Global Secular Council” and its way of responding to my questions about same. But Hemant, for some reason, is more gung ho about it. He did an email interview with Edwina Rogers that was worded in such a way as to indicate a certain amount of…distaste for her critics.

When you first took the position, the fact that you were a Republican was a point of controversy. Do you still get pushback from atheists who can’t see past that label? If so, how do you respond to it?

END_OF_DOCUMENT_TOKEN_TO_BE_REPLACED

Stephanie notices some things about the Secular Coalition for America and its brainchild The Global Secular Council (you know, the one that’s not the least bit global, in fact about as unglobal as you can get).

Will the people in the glossy photos do great work under the Global Secular Council banner? Hard to say. There are some people on that list who have done truly impressive work, but I find it a bit odd that they didn’t hold the launch of the website for the release of work from at least a few of them. I’d like to believe they had the time for that between dinner and going live. There had to at least have been work those people had done that they were willing to repurpose under the GSC banner, right?

Not as of launch, no. But maybe they’ll start producing their own content soon, something more than a blog, since that’s what they’ll need to influence government. They’ll have to produce in order to survive. Big names only bring in so many donations before people want them to do more than have dinners and get their pictures taken.

END_OF_DOCUMENT_TOKEN_TO_BE_REPLACED

Oh gee, the things you find when you glance at the site stats, which show links from other sites. Like this time a bunch from the JREF forum, which surprised me enough that I went to see why. The why? It’s Damion Reinhardt gloating over the fact that Michael Shermer is still popular in skepto-atheo land.

I know that we mostly talk about the accusations levelled against Radford (so much publicly available data to comb through!) but I’d like to pause to consider a hypothesis about the accusations levelled at Shermer.Ho: Anonymously accusing someone of serious sex crimes (at a rageblog website) will make it difficult for the accused to continue as a major public face of the secular movement, in the company of high profile luminaries such as Dawkins, Tavris, Harris, Goldstein, Pinker, etc.Ha: Such accusations, in the absence of some corroboration and investigation, carry little weight outside of the social justice wing of the secularist movement.I’m going to say that there seems to be some preliminary evidence in favour of rejecting the null hypothesis: http://www.secularcouncil.org/team/https://freethoughtblogs.com/butterfliesandwheels/files/2014/05/global.png

Naturally, some of the folks over at FtB are rage vomiting about their collective inability to take Michael Shermer down for good.

END_OF_DOCUMENT_TOKEN_TO_BE_REPLACED

More bonus! Global Secular Council on Twitter shyly calls me a racist. I love this group! 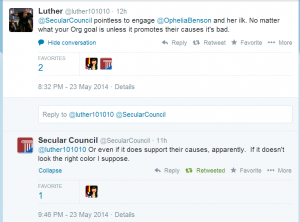 END_OF_DOCUMENT_TOKEN_TO_BE_REPLACED

I was going to move on today, so as not to be a big mean ol’ bully to the Global Secular Council, but then I read yet another of its Twitter responses to me and found that moving on would not be possible.

It was alternating between rebuking me for judging them “by the color of their skin” and saying they are working hard on diversity. Well that’s unclear. What do they mean by “working hard on diversity” if it has nothing to do with “the color of their skin”? “Diversity” is simply a (very stale by now) buzzword used for the purpose of avoiding the mention of race (aka “skin color”) or sex or national origin etc etc. The Twitter account seemed to want to have it both ways – to sneer from a great height at talk of “skin color” while still patting itself on the back for “working on diversity.” (Then there’s a separate question of why it didn’t do this “working on diversity” before it went live instead of after – a question I also asked and got no real answer to.)

@SecularCouncil Which is it? You hate judging by skin or you work hard on diversity? 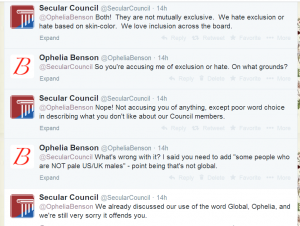 END_OF_DOCUMENT_TOKEN_TO_BE_REPLACED

PZ takes a look at the Global Secular Council Debut and compares how that’s being run to how he and Ed thought about Freethought Blogs when they were setting it up.

Will they be effective? I looked at their Issues page, and it’s rather high-mindedly vague. For instance, one issue isInternational Human Rights. I’m glad they’re for ‘em, but after a scant 3 paragraphs that consist of platitudes, they present their summary:

So, the Global Secular Council’s advice is that the US should do something about it?

END_OF_DOCUMENT_TOKEN_TO_BE_REPLACED

And there’s their About page.

Every ideological movement has a policy center. Republicans have The Heritage Foundation, New Democrats have the Progressive Policy Institute, Libertarians have The Cato Institute, and Secularists have the Global Secular Council.

First, well, no. Ideological movements don’t usually have just one policy center. Also, not all participants in the movements take any one center to speak for them. Second, “ideological” is usually used as a weapon in this “movement” – feminists are constantly accused of importing an “ideology” into the crystalline purity of the atheist or skeptical “movement.” That’s complete bullshit, of course, but it’s still rather funny to see this group so cheerfully identifying itself with an ideology.

With these organizations as models, Global Secular Council is the international policy research and resource center for atheists, humanists, and other secularists who speak out for science and reason instead of religion and faith.

END_OF_DOCUMENT_TOKEN_TO_BE_REPLACED

They’re adding stuff, the Top of Their Field geniuses at The Global Secular Council. We get to watch them add stuff. 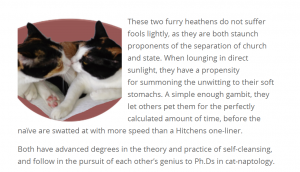